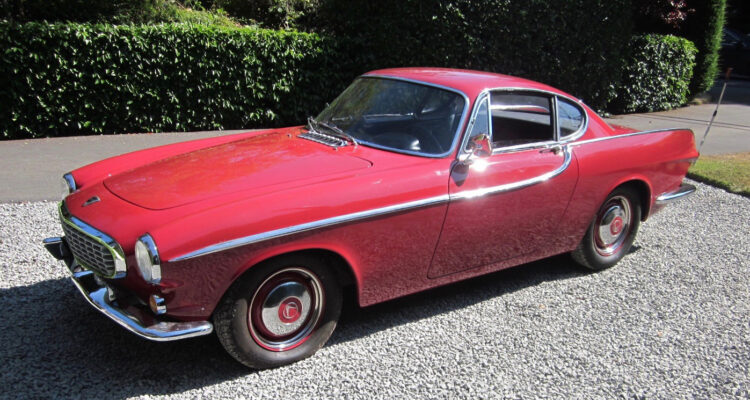 A car-guy buddy was telling me that he sees an old red Volvo 1800S when he walks his dog every night in a Victoria neighbourhood. I first saw the car, or a picture of it, when shown a Google Maps page on an iPad. You could actually see the car in the “street view” map. Apparently, the car hadn’t moved in ages.

I had a retired RCMP mechanic buddy of mine, Wes Nystrom, visiting, so we drove over to the house that afternoon. I cold-knocked on the door and the woman let us have a look. Rusty and rough was the car, but a guy could see it was complete.

It was an early 1964 1800S of the first grouping that was built when Volvo brought the assembly back to Sweden from England. It was confirmed from the expired license plates that the car had been sitting in the same place since 1990, un-driven and open to the elements. It was hard getting to sleep that night, I had visions of the car stuck in my head. A little voice said, “buy it.”

The next day, Bob Cuthill (ex RCAF fighter pilot, Helijet pilot) and Volvo 1800 aficionado, and I brought our own restored 1800 Volvos over to her place to show her that I was serious. Shortly thereafter, I owned the rusted red Swede. When it was being towed home, I swear I could hear the local squirrel population booing me for taking away their home!

This particular 1800S was “born and raised” truly Canadian, having been shipped from Sweden and purchased new in Montreal in 1964, kept for about 50 years by a single owner. This was the year the Beatles hit the world stage, think about it.

The owner Mrs. Woodruff and her late husband brought the car to Victoria but over the years it fell into disrepair, sitting unregistered and un-driven in their driveway. Mr. Woodruff had long passed away. I think the car represented a simpler time for Mrs. Woodruff with lots of family memories, so there it sat.

It would be kind to say the car was just mouldy.

Once back at my garage, the old carpets went straight into the bin – the whole interior was next. Everything, and I mean everything was removed, photographed, logged, sorted, categorized (you get it) and stored away. 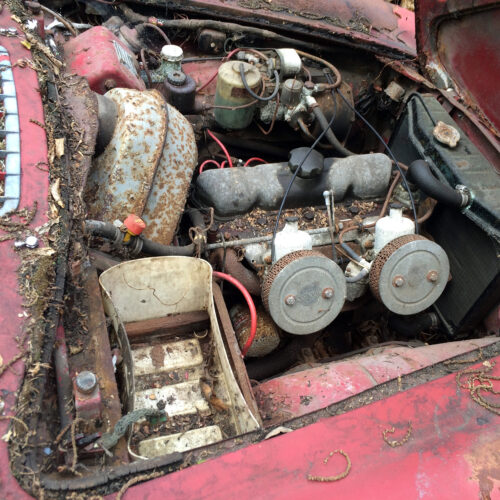 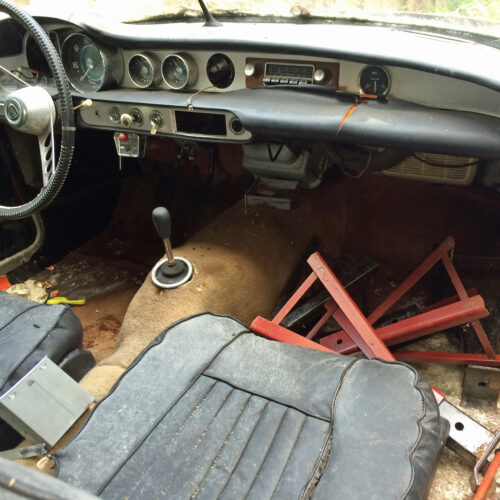 At one stage Mrs. Woodruff asked me when disassembling the car, that if I was to come across a piece of jewelry, could I return it to her. It had gone missing years earlier. Unfortunately, no luck; lots of mechanical treasures, but no gold or diamonds. When one of the door cards was removed, I did find a child’s coloured wrist band inside the passenger’s door.

Over the next couple of years, the car went through what could be described as a partial disassembly and restoration. There were many new parts but mostly disassembly, degreasing, fixing and re-fitting – and I mean everything. It has new black leather seats done by Styles Upholstery in Victoria. New red carpet, new fuel tank, new brake and clutch master cylinders, new hydraulic lines, and an all new exhaust along with many new fittings and rubber seals from Vintage Auto (Olof) in Delta.

All the red paint was stripped from the body and the car was sent to Leonard Hemming and his dad Vic. They worked their magic and I eventually got back a very nicely painted shell. They fitted the bumpers, front headlight buckets, and grille frame so I wouldn’t have to look at the small nicks and dings if I had tried it myself.

With a ton of help from Bob, the engine was removed and disassembled and rebuilt.

The car features Volvo’s famous 1.8 liter 4-cylinder motor with dual SU carburetors, a 4-speed manual gearbox with overdrive, and the classic ‘bull-horn’ chrome bumpers. I pulled the carbs off the car, and a local retired shop teacher and administrator, Rhys Kent worked his magic. He even felt sorry for me, or maybe just curious, so he came over and installed them himself prior to us firing up the engine for the first time.

Rhys’ garage looks like the security line up at an airport, with white trays filled with carbs sent to him from all over the world to be rebuilt. Jaguar, Ferrari, Volvo – quite amazing watching him work.

The purchase and restoration costs total nearly $28K all in, including all the bodywork and paint, and that doesn’t count any of my time. I have a new appreciation for anyone giving a car to a restoration shop and having to pay hourly rates to get the work done.

There are a number of unique and interesting things about Volvo’s 1800S. 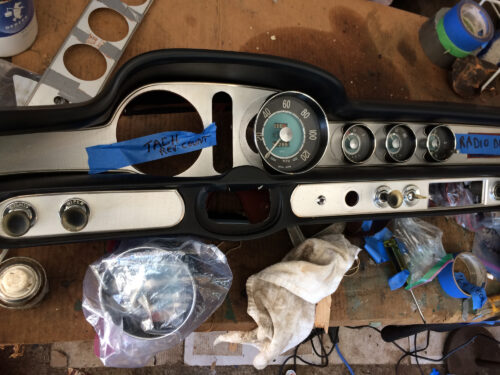 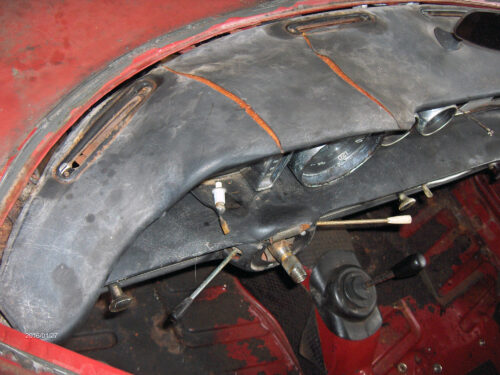 There are three horns on the car. There is the loud dual-trumpet “city” horn activated by the center of the steering wheel, and then a nicer “passing/country” horn situated on a stalk to the right side of the steering column. The overdrive switch is a Lucas switch positioned on the dashboard. On later 1800 models, the overdrive was in the same place as the “passing” horn listed above.

The dashboard of the 1964 1800S is unique. The overdrive switch is just to the left of the pull-out ashtray. Next to that is the two-position fan switch, then the key ignition, and finally the small purple overdrive light which can just be made out through the holes in the steering spoke.

The car has the original (OEM) Smith gauges and Lucas switches. As the upper and lower dash pads were replaced, each gauge was cleaned and re fitted. The car retains its original Marchal sealed beam headlights from 1964. I obtained some original used tires (165 X 15) from Gregg Morris, head of the B.C. Volvo Club.

The vertical temperature gauge between the tachometer and the speedometer was a major operation to replace. It is not electrical. It was two sealed Bourdon tubes that travel directly from it to the attached senders and into the motor. These are very rare to find in operating condition. To replace the gauge, one must drain the engine oil and the coolant. 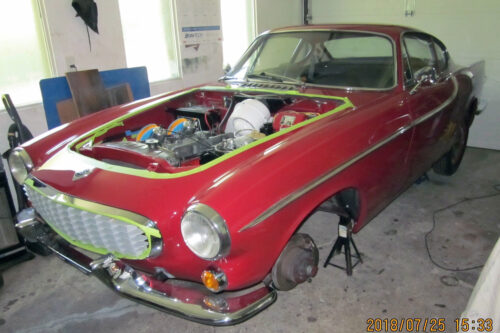 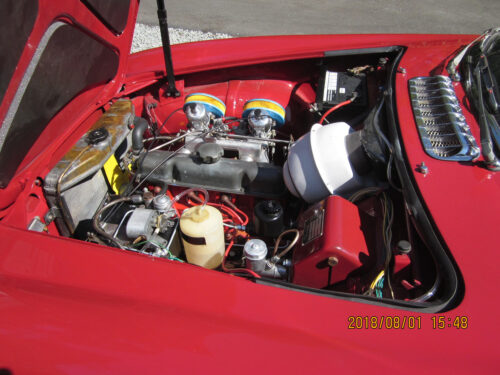 The original position of the rear-view mirror is on the dashboard; almost as if the car is designed to be a convertible. There is no glovebox under the dash. Side-pocket compartments on the kick panels serve as storage for maps and small items, such as driving gloves.

I’ve grown to appreciate even more, the red 1964 Volvo 1800S I bought in October of 2015. It has been quite the labour of love and I have to catch myself from just staring at it in amazement. Not just because the car is a classic but I did most of the “heavy lifting” myself, though I had lots of help of course. 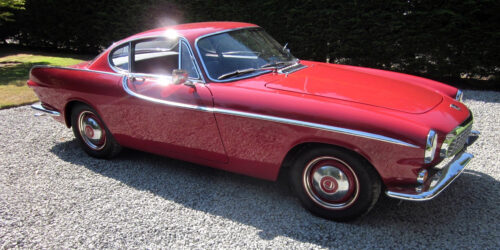 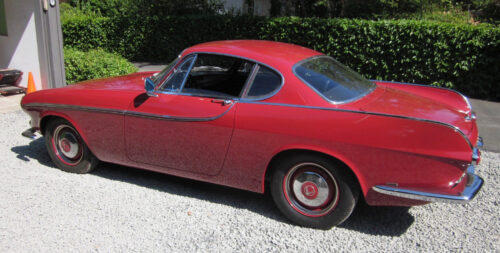 Jamie Graham is a retired chief of police presently residing in Victoria B.C.