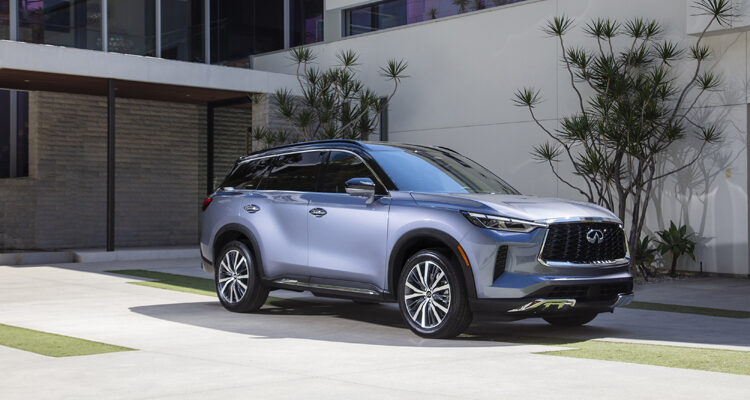 The Infiniti QX60 is a crucial model for Nissan’s luxury division for the simple reason that it just happens to be one of the brand’s biggest sellers, essentially sharing that title with its smaller QX50 sibling. The three-row SUV segment is a popular one – it has, after all, effectively replaced the minivan as the family-moving choice for many Canadians – so the QX60’s sales success should come as no surprise.

It should also come as little surprise, then, that when it came time to redesign it, Infiniti needed to pull off the feat of making something look new, but also ensuring that they don’t estrange too many fans of the older vehicle.

“The QX60 needed some styling evolution,” said Alfonso Albaisa, vice president of global design for Infiniti and Nissan. “We were ready with this product, to have a new (design) language for Infiniti. So not only is this vehicle a new QX60, but also a new face for the brand as a whole.

For Albaisa and his design team and HQ in Japan — the country serves as an inspiration for the QX60, especially in terms of the interior — that meant actually adding more broad panels, more straight lines and more sharp angles. The last vehicle was sleek, to be sure, but has maybe become a bit soft and it was time to add some strength to the design.

You do still get the telltale Infiniti styling cues such as the distinctive grille, sleek headlamps (narrower than previous) and chrome trim elements.

Around back is actually more of a departure than the front thanks to large “Infiniti” scripting across the rear deck (“As a designer, I love the look of the word ‘Infiniti’,” said Albaisa. He’s right) and taillamps that aren’t actually connected, but look as though the are – like the scripting, that’s a first for Infiniti. Those taillamps, meanwhile, get what’s called “digital piano key lighting”, which provides a 3D-effect to the taillamps. In the end, aside from some minor stylistic changes to the wheels and non-flush door handles, the production QX60 looks pleasingly similar to the QX60 Monograph concept we explored on this site a few short months ago. It even gets that design study’s contrasting black roof, which is also a first for Infiniti.

Inside, as should be the case for a luxury brand, the focus was on airiness and materials used. “Inside, it’s like an ocean of leather that is so tailored,” said Albaisa. Along with that, there are open-pore wood inserts, plenty of digital displays and a sprinkling of aluminum trim. It’s all taken to the level of 11 on the all-new Autograph trim, which adds quilted semi-aniline leather who’s finish is said to recall the ripples on a pond, embossed seatbacks, and open-pore wood. The goal is to ensure that any occupant knows they’re in something special as soon as they climb inside.

“When you get in the car, what’s your hand touching?” says Albaisa – everything should be an event.

Said digital screens include an optional 12.3-inch gauge cluster, a 10.8” heads-up display (HUD) ahead of the driver and 12.3” infotainment display with Apple CarPlay and Android Auto capability.

The goal through all this is to echo sentiments of Japanese minimalism in the cockpit; less buttons cluttering up the surfaces, not too many intersecting lines and a very low-key centre console with a short gearlever so purses and duffels don’t snag as you try to move them to the front seat. Since it’s an electronic shifter, there’s no need for a traditional shift linkage which allows for a storage cubby beneath the shift lever.

While the front seat are of the Zero Gravity variety (and have an optional massage feature) the second row is not, because the Xero Gravity design wouldn’t jive with the necessity to be able to tilt and side the second row in order to access the third.

While the styling is remarkable and the interior fit and finish looks to be top notch, Infiniti is sticking with the tried-and-true 3.5-litre V6 they’ve been using in the QX60 since its inception, when it was called the JX35. There will be not hybrid option at the outset (but you have to think there’s very good chance there will be in order for the brand to meet ZEV mandates) and no VC-Turbo four-cylinder, either as the V6, according to Infiniti, is the best choice for the vehicle when it comes to its towing and hauling abilities.

There is, however, a new transmission – it’s a nine-speed automatic instead of the CVT the current QX60 has and once again, it’s all about the best part for the towing and hauling the QX60 is going to be undertaking.

While the lack of a hybrid powertrain may surprise some, the fact that Infiniti has stayed so close to the design study presented by the Monograph is a great start, followed up by a fantastic interior.

Pricing has yet to be announced; look for that info soon as we inch closer to the 2022 Infiniti QX60’s late summer arrival.