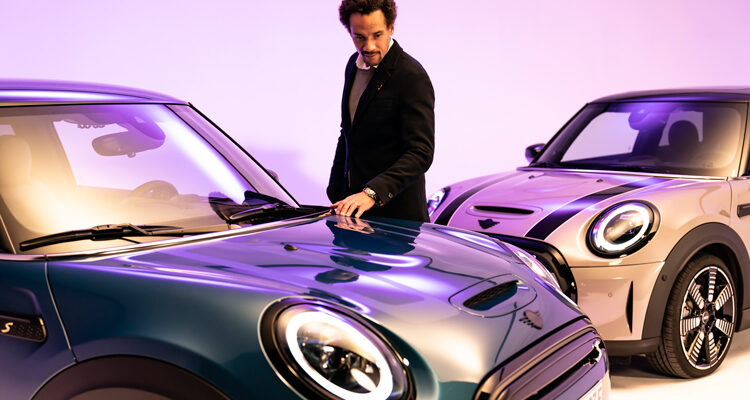 That’s an interesting position for a man who’s been charged with heading up the design evolution of the MINI brand. He’s tasked with moving MINI into a new era of electrification while keeping it connected with its British roots, a goal that demands equal parts innovative thinking and adherence to tradition.

The 46-year-old Munich native shares his Bavarian roots with BMW Group, the automaker where he has worked his entire career. Apart from a brief stint in BMW’s Designworks innovation studio in Los Angeles, Heilmer’s work was primarily within the BMW brand’s design department until he was promoted to Head of MINI Design in 2017.

Today, his experiences guide him in looking at MINI’s evolution through a precise and practical lens, as a series of solutions that work toward reaching an ultimate goal of reduction, simplification, and heritage.

This interview, condensed from a media roundtable discussion, has been edited for length and clarity.

How do you balance the desires of MINI’s ardent fans against allowing the brand to evolve?

This is something I’m taking seriously. I’m really aware of keeping what MINI stands for. On the other hand, it’s part of my job that I’m not asked to preserve what’s given, I’m asked to define the future for the brand. I personally believe that both is possible. To give an example, something that didn’t exist four years ago is the Union Jack taillights. Now, it’s a new icon. Not asking those questions on a daily basis, what could be the future for MINI, is the wrong way. But I’m such a strong MINI fan, and I’m the toughest guy in terms of preserving what we have within MINI. There are two hearts in my chest. One is always trying to make the next step, and the other [says] let’s keep what we do have.

Retaining the essence of MINI means keeping the cars’ dimensions as small as possible with short overhangs and nimble maneuverability. But the demands of varying crash and pedestrian safety regulations in global markets create a push-and-pull dynamic. How do you consider these two factors?

My personal belief is, regardless of brand, that we have to take care that our cars are not growing and growing from one generation to the other. We need to turn it back as soon as we are able. Crash requirements are getting harder and stronger. To reverse that in [the current] architecture or platform is not possible. We put a lot of effort into reducing the front overhang visually. But as you can imagine, it’s one of my main tasks for the future to get this more [toward] what we do expect for our MINI proportions in the future.

Do you ever feel that working with a strongly defined brand such as MINI is a creative prison of sorts? Do you ever wish you could start with a blank slate?

I don’t feel necessarily that it’s prison. You do have a lot of advantages by starting just with a blank sheet of paper, but on the other hand – and that’s what I feel really strongly about – it’s so much more having a strong brand like MINI behind yourself. It feels like a bigger challenge. I would always rather choose developing a brand that is strong than inventing something entirely new. That’s something I did at the time when I was studying, and that’s an entirely different challenge. A part of the heritage of the brand is the change. I take it as a challenge, bringing that part of the heritage of MINI into the future as part of creating an extended history next to the original icon and trying now to extend the brand into much more than just one car.

You’ve stated that simplifying MINI design is a mission of yours. What motivates you to move MINI in that direction?

Everything is getting more intense in terms of information, and at the same time you feel that somehow you need to calm down. So, devices are becoming more and more simple. There’s no button anymore on an iPhone, for instance. The general trend is focusing on what’s important. I try to reduce our MINIs exactly for that reason: these elements that are still there, they need to stay important. We need to pay much more attention to those details to enhance this impression of what we want to have as MINI.