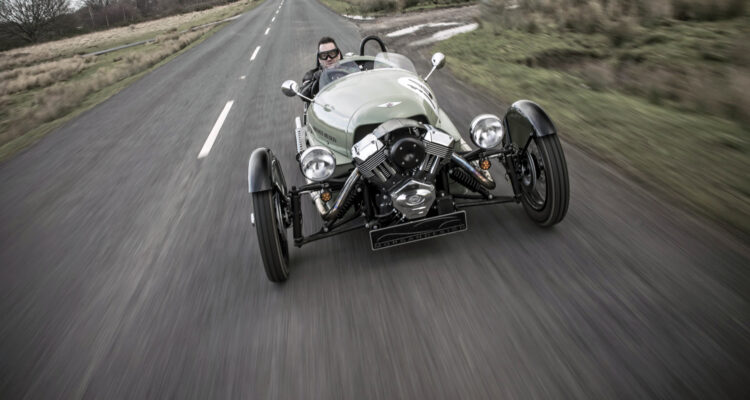 You may have seen one on the road, or several! Three wheeled vehicles are becoming increasingly common, although they have been around for decades. Morgan is probably the most famous of the three-wheelers, having started production of three wheel vehicles in 1911 and still in production today. There are many other three-wheeled vehicles being built today. Most are open topped – a few are enclosed. Some have seating side by side while others place one person behind the driver. Some have a steering wheel, while others have handlebars like a motorcycle. There are even differences in configuration, with some having one wheel in front like a tricycle, while many have two wheels in front and one in the rear.  It is this multitude of configurations that blurs the lines between the three wheeler being a motorcycle or a car, and it is just as confusing for the government regulators as it is for the public.

Canada’s Federal Motor Vehicle standards define a three wheel vehicle as different from a motorcycle: it is designed to travel with 3 wheels in constant contact with the ground, has no more than 4 designated seating positions and has a Gross Vehicle Weight Rating (GVWR) of 1000 kilograms or less. Even this leaves some confusion, as it does not designate seating positions but does reference several safety standards the vehicles must meet, such as seatbelts, lighting and mirrors.

The United States National Highway Traffic Safety Administration (NHTSA) lists all three wheel vehicles as motorcycles regardless of configuration and required occupants to wear helmets and have a motorcycle license. Even there, it not simple. Amended legislation has been introduced but not passed to make three wheel vehicles comply with passenger car safety regulations and meet all crash test standards. As you can imagine, this has been hotly discussed!

In Canada, even our provinces don’t agree. British Columbia, Manitoba and Quebec class them as three wheel vehicles and they can be driven with a car driver’s licence while in Alberta and New Brunswick they are classed as a motorcycle and require a motorcycle driver’s licence. Saskatchewan has just allowed three wheeled vehicles to be licenced in the province and Ontario is undertaking a ten year pilot program.

Looking closer at the new Saskatchewan program, three-wheeled vehicles are separated from motorcycles by the controls and seating. Three wheel vehicles will have a steering wheel instead of handlebars. Foot controls for acceleration and braking are used instead of hand controls, and the seating will be equipped with automotive type seat designs.  Three Wheel drivers will be able to drive with a regular passenger car driver’s licence but learner’s licence and the transporting of children or infants who require booster/car seats is prohibited. Occupants must wear helmets and eye protection unless the vehicle is equipped with a windshield. The vehicles will be exempt from some of the passenger car safety standards such as airbags, heater/defroster or bumpers.

Ontario drivers will require a regular passenger vehicle driver’s licence but the vehicles will be registered as motorcycles. Seatbelts and helmet use are mandatory. Like Saskatchewan, infants are prohibited passengers, as are children in primary grades, and no sidecars or trailer towing are allowed.

One of the more popular three wheelers is the Polaris Slingshot with headquarters in Medina, Minnesota and Canadian Sales Office in Winnipeg, Manitoba. The Slingshot is a two passenger, side by side seating open-top vehicle that their website lists as a motorcycle but with different handling characteristics. It is equipped with a 2.4 litre engine in front, side-by-side seating, ABS braking, belt drive rear tire and a tilt steering wheel. It is definitely closer related to car than a motorcycle.

Another three wheeler is the ELIO. It is a fully enclosed vehicle with heater and air conditioning, a .9 litre three cylinder engine with manual or automatic transmission and front wheel drive, power windows, ABS braking, air bags and seating with one person behind the other. Elio says their vehicle is a motorcycle because of the seating configuration.

Discussions around the table would lead me to think that these vehicles and many others like them are neither passenger cars nor motorcycles. First of all, almost all of them are seasonal vehicles, not equipped for cold weather driving. They handle differently than passenger cars or motorcycles and the seating positions are not consistent. The most consistent item on them is the use of a steering wheel! People don’t buy these to save money. There are much cheaper passenger cars on the market that will get similar fuel economy. These are typically vehicles people buy because they like the wind in their face, the sun on their bodies and the thrill of driving something different.

Perhaps the regulators should take a look at what the regulations are trying to achieve. If we are trying to protect the occupants of three-wheelers by making them passenger vehicles, why do we allow motorcycles on the road! I am an avid motorcyclist and live with the knowledge that there are inherent dangers in riding them. Perhaps three-wheelers should be given the same responsibilities and choices. Put them in a class all their own. Don’t try to make them passenger cars or motorcycles. They are Three-Wheelers. Put in consistent regulations across Canada such as the type of driver’s licence needed. Perhaps there should be a separate designation added to your regular car drivers licence that you get after writing a specific three-wheeler safety exam. We do it for boat and snowmobile operators – why not three wheelers.

Regardless of what happens with the regulations, three-wheelers will become more popular on our roads. The discussions will go on for a long time on how to regulate them. I think we should just call them what they are.