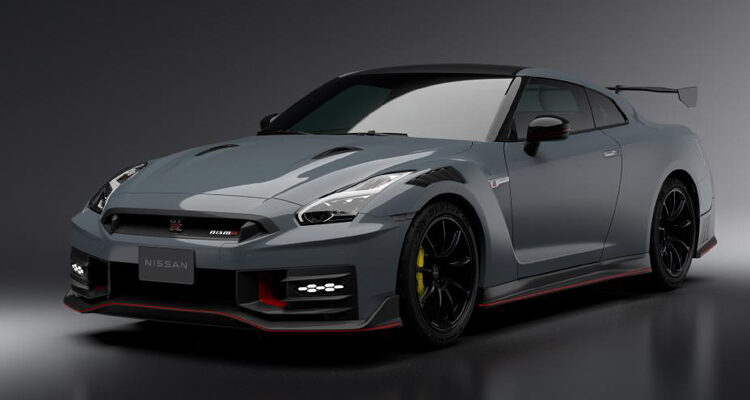 This Week In Auto: Volume 22

2024 Nissan GT-R Goes Under the Knife…sort of

You’ll have to look pretty close (unless you’re a Nissan GT-R aficionado, a group as dedicated to the cause as it gets) to see how the refreshed 2024 GT-R differs from the current model – but it does. The front and rear fascias have been given more aggressive designs that also improve aero, there are new rear wings – that’s “wings” plural; the Nismo model gets its own unique swan-neck design — and they’ve gone so far as to thin out the grille mesh for more downforce. There are also new colour choices including Millennium Jade, a shade made famous by the ultra-rare V-Spec II Nür model of Gran Turismo fame.

Power-wise, both the Nismo and standard models make the same power from twin turbo V6s: the former 600 horsepower and 481 pound-feet, the latter 565 hp and 467 lb-ft. The Nismo, however, benefits from a new front limited-slip differential as well as enlarged carbon-ceramic rotors.

Cadillac’s Goin’ Racing, and Here’s What It’s Gonna Look Like

Cadillac is all ready to go racing in the all-new LMDh category, the latest top-tier sports car series set to take place in North America under the IMSA WeatherTech SportsCar Championship as well as abroad in the FIA Word Endurance Championship. When they hit the track – wherever they are – with their new V-LMDh prototype racers, they’ll be doing so in the red, gold and blue of the V-Series graphic, seen on vehicles like the CT5-V sedan and Escalade-V SUV.

One of the three colours will feature prominently on each car, with cars numbered 01 and 31 competing in North America under the Whelen Engineering banner, and car number 2 competing in the WEC under the Cadillac Racing banner. Each car features a 5.5-litre DOHC V8 pushing out up tot 670 horsepower, sent to the rear wheels via a seven-speed sequential gearbox.

We Thought It Would Never Happen…

After over two decades as the top selling car in Canada (as opposed to the best selling vehicle in Canada, which is the Ford F-150 pickup and probably will remain so for the next three millenniums or so), the Honda Civic has finally been unseated by none other than its greatest rival — the Toyota Corolla. The Toyota cleared the Civic in sales by over 3,330 units in 2022, for a total of just over 33,000 units sold – which is actually a decline over ’21, Toyota falling victim to supply chain shortages, as did most every other major manufacturer. Other top 10 performers in ’22 include the Kia Forte, Volkswagen Jetta and – believe it or not – the Chevrolet Malibu.

The hits just keep on coming not just for Toyota but for the Corolla in particular; this week, Toyota chose the Tokyo Auto Salon (not to be confused with the Tokyo Auto Show; the Salon is more about aftermarket tuners as opposed to new cars. Think a Japanese SEMA) to debut two special takes on an old classic: the Corolla Levin, or AE86.

Historically a favourite among drifters and tuners thanks to its RWD platform, it has been given a modern take thanks to the Mirai fuel cell vehicle. Toyota has taken that car’s high-pressure hydrogen storage tanks and mounted them to the rear of what they’re calling the AE86 H2. It still uses its original four-cylinder engine, but has been tweaked to run on hydrogen fuel, with the intention of using it as a jumping off point to develop an actual race car set to run in Japan’s Super Taiku series.

Toyota also revealed the AE86 BEV concept, a fully-electrified version of the AE86, using the EV motor from the Tundra and Sequoia hybrid trucks, and the battery from the Prius Prime. In keeping with the car’s sporting nature, it also gets a manual transmission.