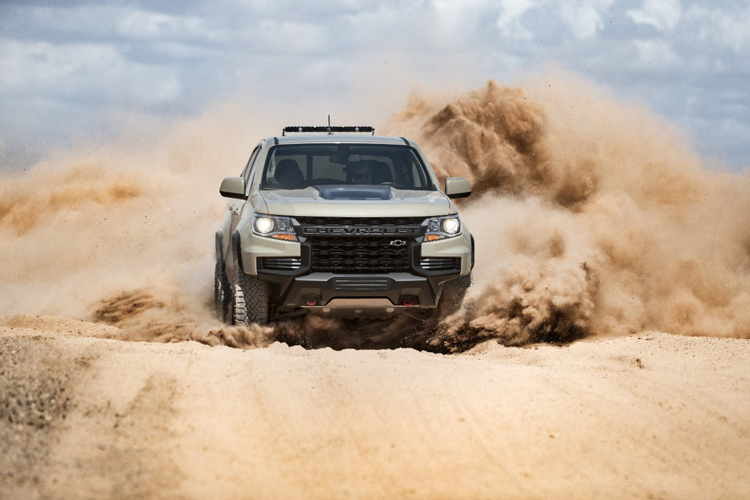 The 2021 Chevrolet Colorado 4WD Crew Cab ZR2 is probably how the kid inside all of us would like to design a pickup truck. All black, high off the ground, an aggressive front grill, massive tires and a light rack over the cab.

The good news is, this isn’t just someone’s imagination, it’s the real deal. Our test vehicle made quite the first impression and was certainly a conversation starter amongst the dads in the pickup (pardon the pun) line at my son’s school.

The base price for the mid-size truck is $47,998 and it comes well-equipped and already looks good. As optioned, the tester totalled $55,788 – and this is where things get interesting.

Quite honestly, it makes all the difference in the truck’s look and ups the cool factor considerably. The second option, which we will get to later, can be heard before being seen.

The Colorado has three available powertrains to choose from, starting with a base 2.5-litre four-cylinder, as well as an optional 2.8L Duramax turbo diesel.

The ZR2 I tested came with the available 3.6L V6 engine under the hood, which is rated at 308 horsepower and 275 ft-lb of torque. Notably, it comes with cylinder deactivation technology to improve fuel economy, and you can see just how many cylinders are in operation through the gauge cluster (V6 or V4 icons).

The engine is paired to what I found to be a very good 8-speed automatic transmission. 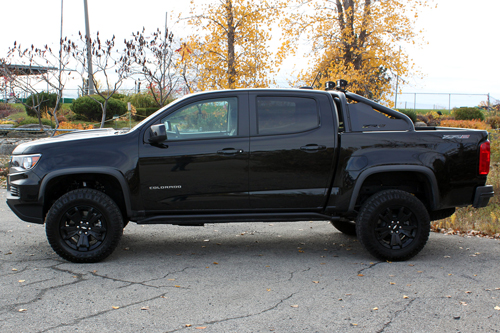 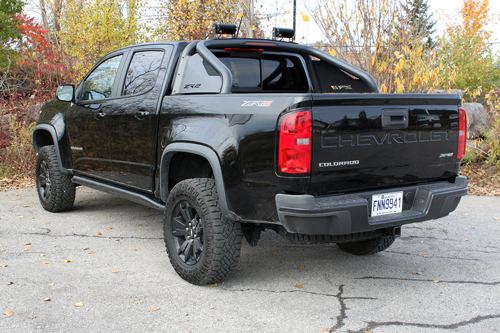 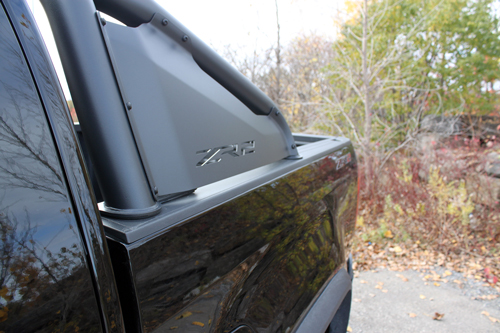 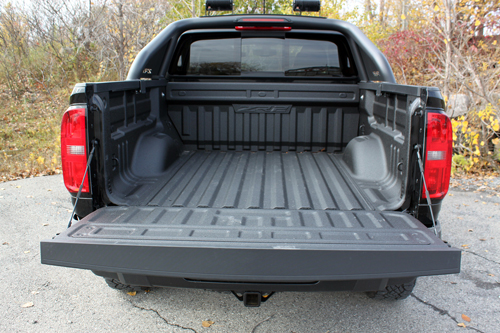 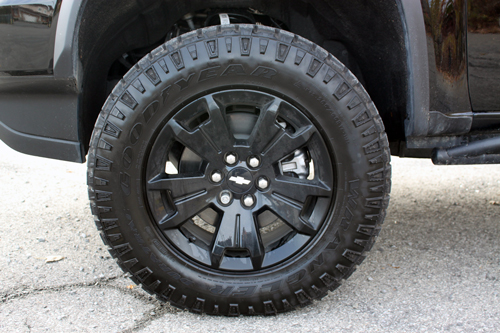 I did notice that this particular Colorado ZR2 was quite loud, and that is probably thanks in large part to the optional Performance Exhaust Upgrade System ($1,775), which is said to “upgrade the look and sound of your truck’s exhaust” –  I.e. make it louder.

But in a good way, quite frankly, as it gives the truck some gravitas befitting its look.

However, despite the cylinder deactivation technology, I was a little disappointed in the fuel economy numbers I generated, coming in at 16.8 litres per 100 kilometres in a mix of highway cruising and city driving. That is well above the estimated 14.1 L/100 km combined average.

As mentioned at the start, the Colorado ZR2’s design is one to appreciate.

In all black like our tester, the front end looks menacing, quite a juxtaposition with the base Colorado. The bowtie logo is moved from the centre off to the right, with the word Chevrolet emblazoned across the unique grille. The additions of two red two hooks in the front really stands out, too.

From the side, the high ground clearance is noticeable, as is the rising beltline of the crew cab doors. What is also apparent is the relatively short truck cargo bed, which is also quite narrow, limiting its usefulness.

With that ground clearance comes one disadvantage for some of the shorter folks in my family – getting into the Crew Cab of the Colorado proved to be a bit of a challenge.

The cabin itself is nice and spacious, especially up front, while the rear can be a bit tighter for some taller folks. The back bench flips up to give access to the floor for carrying items like groceries in the cabin rather than in the truck bed.

The cabin also has plenty of creature comforts, including a heated steering wheel and front seats, and the Colorado ZR2 also comes with a remote starter for those colder mornings.

Being so high does give the Colorado’s driver a good vantage point of the road, but there are some large blind spots thanks to the pillars.

From behind the wheel, the driver also has easy access to all the essential controls, which are easy to understand and operate.

I have read some complaints that the controls for the infotainment system are outdated, but I found them to be just fine and were uncomplicated.

In the ZR2, you get the larger eight-inch infotainment screen (seven inches is standard), and the system features a Wi-Fi hotspot, as well as compatibility with Apple CarPlay and Android Auto.

I found that the menus were easy to understand and navigate, while the touchscreen was also very responsive. There are also redundant physical buttons for the system.

As mentioned above, the Colorado ZR2 was loud thanks to the exhaust package, but I mean, it’s a pickup truck, so you don’t go into this expecting a whisper-quiet cabin. That being said, despite the loudness I didn’t find it to be too obnoxious for passengers attempting to hold a conversation. Just don’t say anything really important under hard acceleration unless you don’t want it to be heard.

And yeah, the ride was bumpy but, again, it’s not something you aren’t prepared for knowing you are in a pickup truck. 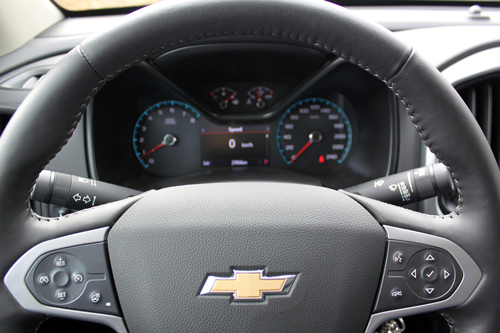 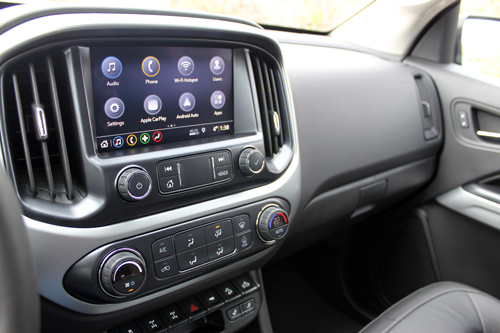 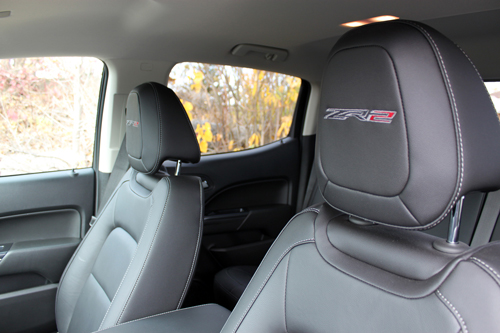 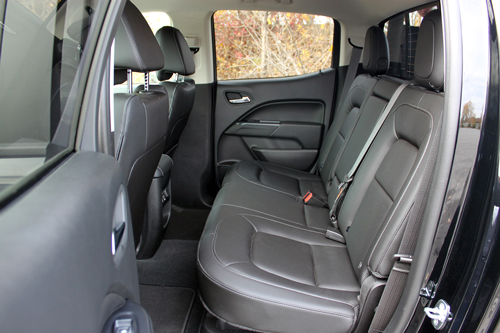 I found that the Colorado’s maneuverability was quite good, making it easy to slip into parking spots, even in reverse. Definitely an asset for people who would use the Colorado on job sites, which are notorious for poor parking conditions at times.

The engine/transmission combination is also well executed, offering a smooth drive through the gears.

While there may be some limitations in how much utility the Colorado ZR2 crew cab can offer due to its smaller truck bed, it does make up for that in towing capacity. And it’s definitely a way to stand out among your colleagues on the job site, especially the way our tester was tricked out.