Staying true to the current Mazda nomenclature of adding 0s to existing model names, the latest to do so is the just-announced CX-50 being marketed as a more rugged version of the CX-5. The crossover aims to bring the company’s signature motoring experience to the off-road set.

“In recent years with the compact CUV segment dominating the industry, Mazda’s best-selling CX-5 has impressively grown its market share. Mazda is taking this opportunity to expand in this segment with a vehicle purpose built for outdoor enthusiasts and customers with a more active lifestyle,” says Jeff Guyton, president and CEO of Mazda North American Operations, during the live-streamed world premiere on Monday. 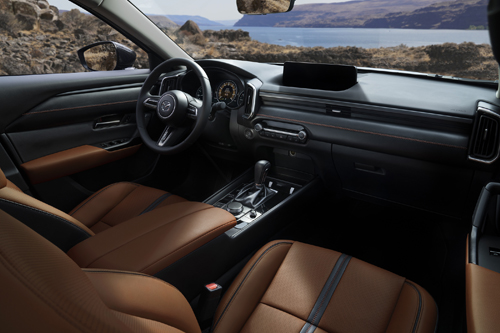 “We know there are many outdoor vehicles on the market, but Mazda is offering something special by applying unique on-road driving dynamics technology to an expanded set of terrains.”

No official exterior dimension measurements are listed as of yet. The brand does say, however, that the height and length are conducive to easily loading and unloading recreational gear. And anything not fitting in the cargo area can be put up top as the high strength roof rails, reinforced B-pillars and door jambs are designed to accommodate added weight.

Don’t worry about inadvertently bringing Mother Nature into the cabin with you, as the seat coverings utilize material made to combat the elements, inspired by modern technical apparel. Also found inside is the first appearance of an optional panoramic moonroof in the lineup.

At first blush it appears to be roughly the same size as the aforementioned CX-5, still long, wide and sleek while featuring a KODO: “Soul of Motion” meets backcountry aesthetic. The crossover wears a lot of black-coloured body cladding and tough looking bumpers, and will debut new paint and upholstery colours such as a Zircon Sand exterior and terracotta interior. 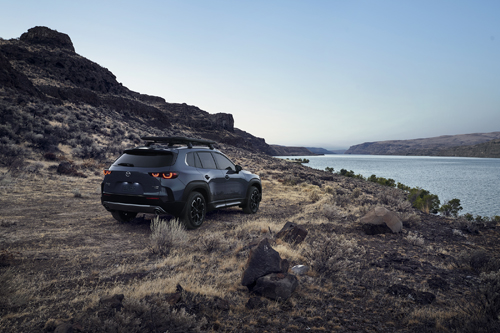 The CX-50 is launching with two familiar 2.5-litre Skyactiv-G mills, one naturally aspirated and the other turbocharged, mated to a six-speed automatic transmission. Specific output has not been announced, though numbers similar to the CX-5 is likely. A selection of electrified powertrains is expected in the coming years, including a conventional hybrid offering.

Given the class of vehicle it’s only logical i-Activ all-wheel drive is standard equipment, complementing the new Mazda Intelligent Drive Select, or Mi-Drive for short. The latter is similar to what’s seen on typical off-roaders allowing the customization of throttle response, steering feedback and the G-Vectoring Control system that moderates engine torque to deliver a more stable ride.

The 2023 Mazda CX-50 is the first model to be manufactured at the Japanese automaker’s new plant in Huntsville, Alabama. Production is expected to begin this coming January.