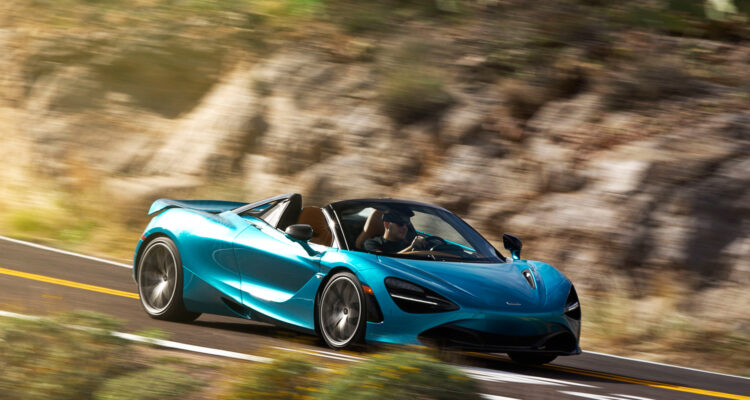 Four hundred thousand Canadian dollars, give or take a Honda Civic or two, is what is required to procure the Belize Blue 2020 McLaren 720S Spider Luxury I’m scything down some lonely desert roads outside of Phoenix, Arizona – and I’m not even tickling the outer extremes of this carbon-fibre mid-engine hypercar’s envelope. Yet, not this side of a Bugatti Chiron have I experienced a car that, from relative elevated speeds, can surge forth with such afterburner intensity. So from a financial perspective, considering this McLaren is one-tenth the price of the Chiron, one could considerate it almost a bargain.

Of course, this new retractable hardtop version of the McLaren 720S is so much more than just about outright acceleration, although the Spider does trade in gobsmacking chunks of velocity like McDonalds trades in hamburgers.

The Spider seems at home out here in this beautifully haunting, jagged landscape. Only the strong can survive, and this menacing wedge looks to be more than a match. The earth is red, parched and dotted with rocks and scrub brush. Ancient Saguaro cacti stand sentinel, and the gentle wind carries nary a sound. Well, until the McLaren’s V8 engine barks to life and starts belting its metallic howl.

These are challenging roads, so at least I’m getting a bit of a workout, even if the car isn’t. The 720S Spider’s handling is superb, with a commendably civilized demeanour and compliant ride when the Handling and Powertrain rotary controls are set to Comfort (there’s also Sport and Track). Credit goes to McLaren’s complex Proactive Chassis Control II suspension that hydraulically connects the left and right dampers. Put simply, it allows for generous vertical wheel travel while also maintaining the roll stiffness needed for ultimate handling. 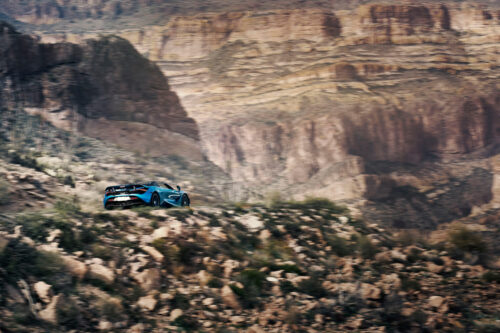 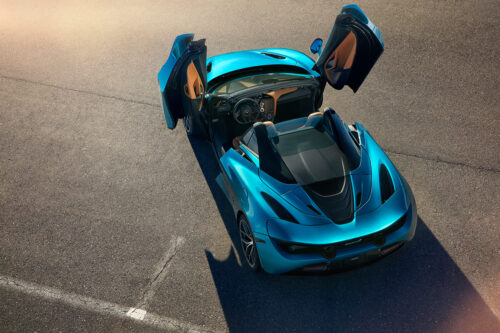 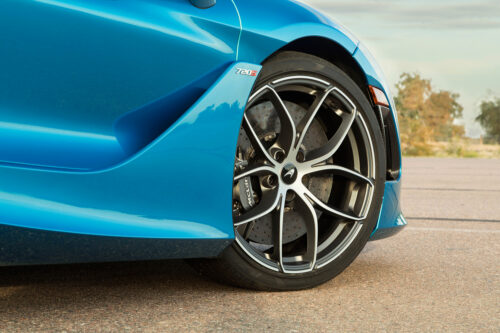 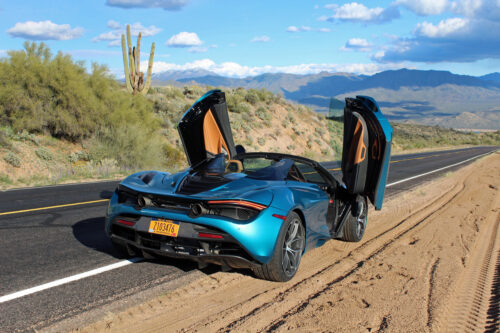 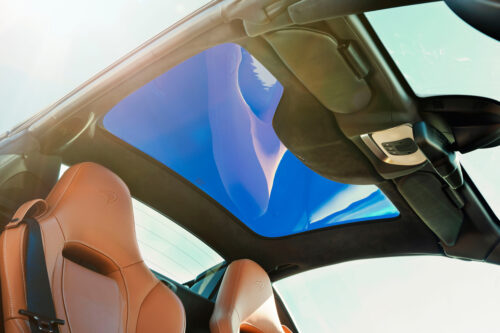 The Spider loses nothing to the Coupe in structural integrity, as the 720S was engineered from the start to be a convertible. The signature McLaren Monocage II-S carbon-fibre tub is as stiff as a frozen boot, so lopping off the roof panel doesn’t really affect it. What it did do was present a challenge to the aerodynamic engineers who had to ensure the Spider maintained the correct balance of slipperiness and downforce. Hence those sexy glazed flying buttresses that guide air over the tonneau and active rear spoiler.

McLaren engineered a new one piece carbon-fibre roof for the 720S that, with its eight electric motors, tucks itself away in scant eleven seconds. The vertical rear window can be dropped independently. The roof will operate at speeds up to 50 km/h, and should you wish to test the security of your toupee, the 720S Spider can reach an open-air top speed of 325 km/h. Never got there, although I can confirm that at approximately two-thirds of that velocity there is little wind buffeting with the windows up.

With only a 49 kg penalty for the roof and its associated gubbins, the Spider matches the Coupe’s 0-100 km/h sprint of 2.9 seconds and will reach double that speed in 7.9 seconds. A curb weight of only 1,332 kg means the 720S Spider is the lightest in the segment.

Ah yes, the engine. Power comes from a twin-turbocharged 4.0L V8, a format that both AMG and Porsche/Audi/Lamborghini use to great effect. But this bent-eight is nothing like those Germans that produce gobs of effortless low-end torque and rumble with a hint of classic Motown. The McLaren unit is a decidedly more racy, high-strung affair, spitting out 710 horsepower at 7,500 rpm and 568 lb-ft of torque from a lofty 5,500-6,500 rpm. It’s actually a bit flat up to about 4,000 rpm, after which it kicks like a mule.

Yet therein lies its charm and excitement. Like a naturally-aspirated engine, you have to keep ‘er on the boil, and once in the kill zone this V8 is an absolutely unrelenting beast.

The 720S Spider is rear wheel drive, and power routes through McLaren’s Seamless-Shift seven-speed dual-clutch gearbox. Like the rest of this supercar that quivers with unbridled energy, the transmission is not super happy puttering around town, yet out here away from the tiresome crawl it does indeed shift with lightning speed and smoothness. Track Mode (vs Comfort and Sport) is another story. What McLaren calls Push Technology uses the built-up kinetic energy of the flywheel “to deliver an impulse of torque as the next forward gear is engaged”. I call it a kidney-punch.

You’ll be wanting the optional carbon-fibre shift paddles that look spectacular, sticking up all scythe-like behind the carbon fibre steering wheel. They do your bidding with lighting response.

Unlike its mellifluous rivals (Audi R8, Lamborghini Huracan, Ferrari Pista, Porsche GT3 RS), the McLaren 720S Spider’s 4.0L V8 does not sing a particularly pretty song. That noted, its raw and racy bellow is certainly businesslike and advertises its power in no uncertain terms, especially here fitted with the optional $6,490 Sports Exhaust.

All this is not to say the 720S Spider is an unruly beast. Quite the contrary. McLaren states the 720S and Spider variant to be its model with the widest bandwidth of abilities. Aside from the tricky ingress and egress, the Spider is about as user friendly as a hypercar can be. It could be driven for its complete lifetime by your light-footed Great-Auntie (with both Handling and Drivetrain dials welded to Comfort, of course) and she’d be blissfully unaware of the great abuse this missile can inflict upon the laws of physics as well as the English language.

Forward visibility is excellent, and rearward visibility not bad either. The lovely stitched Vintage Tan leather here looked gorgeous and the optional $4,830 Bowers and Wilkins 12-speaker audio sounded mighty impressive – at least until you fired up that feral V8. You will want the glazed electrochromic roof panel ($9,940) that goes from five percent tint to 90 percent with a touch of a button.

The 2020 McLaren 720S Spider starts at $350,000 in Canada. The $363,240 Luxury variant adds a choice of four ByMcLaren Luxury leather interiors, interior and engine bay ambient lighting, powered heated seats and special metallic interior brightwork. The same figure also nets the racier trimmed Performance with more carbon-fibre inside and out, along with a Nappa/Alcantara interior. Mechanically there are no differences.

As amazing as the 2020 McLaren 720S Spider’s abilities are, equally astonishing is the fact that McLaren Automotive – the modern day street car division of this British manufacture – is only entering its ninth year of existence. That said, there is plenty of heritage here. The decades of McLaren race cars and the legendary F1 supercar from the 90s (of which only 106 were built) vibrate within the DNA of this gorgeous Brit.

Blindingly fast, surprisingly civil, breathtakingly gorgeous and bristling with race car tech, this retractable hard-top take on the 720S Coupe only expands on that car’s desirability.