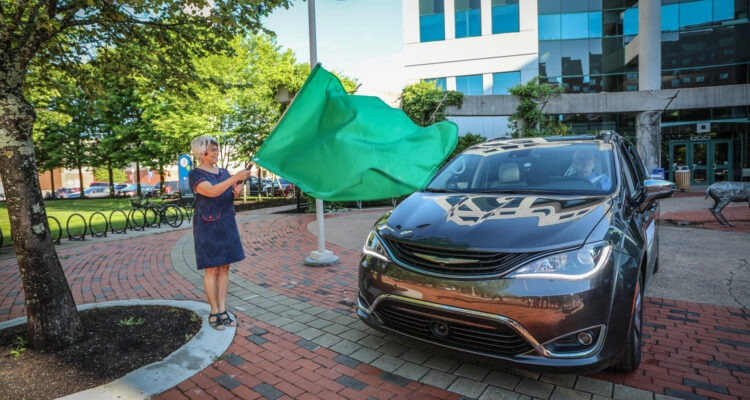 EcoRun, an event hosted by the Automobile Journalists Association of Canada (AJAC) went to New Brunswick for its 7th annual showcase of fuel efficient vehicles. Nineteen vehicles ranging from economy compacts to luxury coupes were driven by AJAC members on the highways and back roads of New Brunswick exploring this beautiful province over two days and demonstrating that efficient driving can save consumers a lot of money.

Vehicle powertrains included pure electric vehicles, plug-in hybrids, conventional hybrids, diesel engines, hydrogen fuel cells and gasoline engines. Each journalist was assigned 6 vehicles to drive over the duration of the event and actual fuel economy figures were recorded and compared to the window sticker ratings provided by Natural Resources Canada (NRCAN). The results will surprise you!

Day one of EcoRun, I was assigned to drive three distinctly different vehicles: a Mazda CX-3 powered by a conventional gasoline engine, a Mitsubishi Outlander Plug-in Hybrid vehicle and the Nissan Leaf pure electric. Comparing the three proved enlightening.

The morning started with the Mazda CX-3 departing from Moncton city hall and a short drive on the highway for a quick stop at Magnetic Hill. The optical illusion at Magnetic hill provided by the rolling terrain makes it look like water can flow uphill and so can a car! After testing my senses, it was off to Knocks Café in Sussex for a cup of coffee and a delicious butter tart. The Mazda performed perfectly. The goal was to drive for economy but maintain a realistic driving style. On the highway, I often set the cruise control at the speed limit but would switch it off if there were hills so I could better control speed increases on downhill stretches and deceleration going up hills. The air conditioning was on most of the time as the weather was sunny and warm but to save some fuel I would switch off the AC compressor is the car was cool inside. The final driving leg of the Mazda got us to Snider Mountain Ranch, a beautiful summer camp for youth. While the electric vehicles were charging, we enjoyed some of the activities such as archery, canoeing, horseback rides and rock wall climbing. Over the duration of my drive, I achieved 6.9 litres/ 100 kilometers, bested by only one other driver and well under the 8.2 L/100 km rating from NRCAN, plus it was a fun vehicle to drive.

When I stepped into the Mitsubishi Outlander PHEV, it showed it had a range of 26 kilometres on pure electric power before I would need the gas engine. Using the paddle shifters on the steering column to control the regenerative braking levels of 1 though 5 (max is 5), I was able to increase that range to 31 kilometres as I left Snider Mountain Ranch. Most of the drive was on the highway as we headed to Fredericton and lunch at Isaac’s way. The seafood chowder is amazing! I must confess I didn’t use the cruise control much on this section of the drive and I experimented with the regenerative braking features of the Outlander. Level 5 regen slows the vehicle like you were stepping on the brake pedal. Operating on electric mode, the Outlander cruises effortlessly on the highway and when I ran the battery down the gas engine cut in smoothly. A button on the console allows driver control of battery charging from the gas engine and with a little more experience with it I could have driven more efficiently but even so I achieved 5.1 L/100 km, a tie with another driver and better than NRCAN’s 6.2 L/100 km rating. 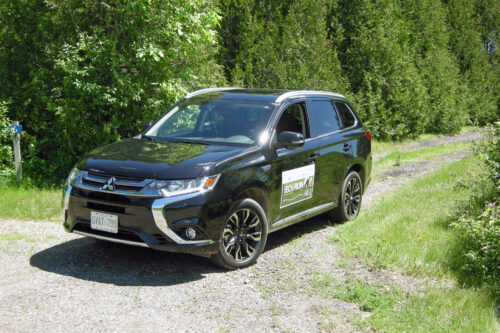 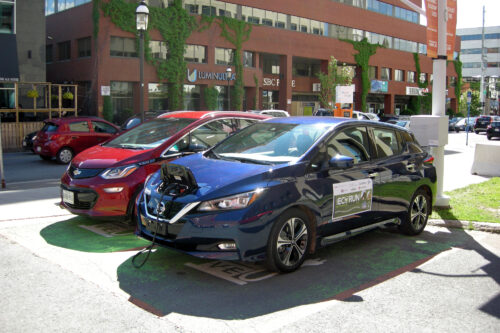 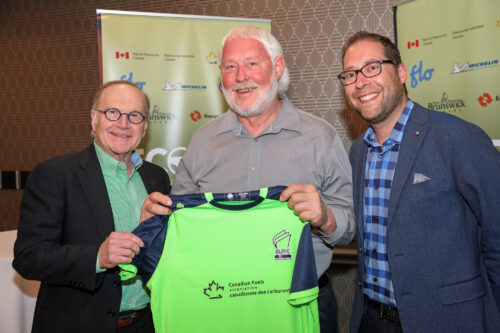 The final vehicle of the Day was the Nissan Leaf, with about a 130 kilometer drive on the highway from Fredericton to Saint John and our second night at the Delta hotel chain. Because other drivers had depleted the Leaf battery, I was left behind for about an hour while the Leaf was charged at a public charging station in a downtown Fredericton parking lot. This showed the shortcoming of electric vehicles for longer distance highway travel but it did give me the opportunity to enjoy some time along the city’s riverfront walking paths. With 159 kilometre range showing on the Leaf instrument cluster, we unplugged and headed to St. John. The Leaf cruises effortlessly on the highway and acceleration is good. I watched the range indicator drop as we drove but it was always higher than the navigation system showed the distance to our destination, so I wasn’t worried. There is some gear whine from the powertrain when decelerating and accelerating but otherwise the Leaf is very quiet inside and cruises effortlessly. I set the cruise at 100 kph and achieved the equivalent of 1.7 L/100 km, better than NRCAN rating of 2.1 L/100 km.

Overall, the combined fuel economy of all Journalists was 1.59 L/100 km better than the NRCAN rating for all 19 vehicles, which shows that it really is possible to achieve or better the NRCAN ratings on the window stickers with some smooth driving techniques. Drive at the speed limit, accelerate smoothly, avoid passing other vehicles and brake only when necessary. Not only do you save yourself money, the drive is also more relaxing and enjoyable.

Note: The event was capped off with the Canadian Fuels Association Green Jersey winner, awarded to the eco-friendliest driver throughout the event. For 2018, that honour went to Saskatoon’s Jim Kerr, representing vicariousmag.com.

*For more on this adventure, check out Jim’s story in the latest issue of VICARIOUS magazine.