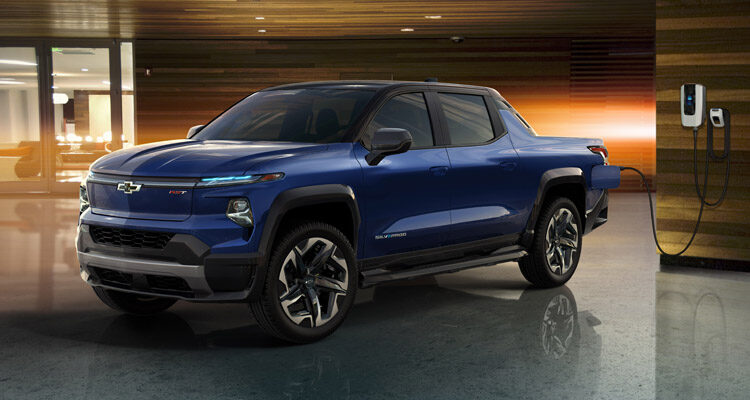 Officially teased last summer, General Motors finally unveiled the 2024 Chevrolet Silverado EV during an online presentation as part of Consumer Electronics Show week. And dare we say it might be one of the best looking vehicles to debut at the annual event?

“It builds on more than a century of Chevrolet truck dominance, industry leading innovation and taps into the limitless imaginations of our engineers and design teams. We’ve created a truck that is more than just an electric truck: this is a purpose-built Chevrolet Silverado EV,” says GM CEO Mary Barra in the CES opening keynote.

“Chevrolet Silverado EV will harness the best of the Ultium platform and Silverado’s proven credentials as the brand’s best selling nameplate. It will offer a revolutionary mix of capability, performance, safety, flexibility and design that catapults this electric truck, for both fleet and retail customers into a category of its own, while offering a GM estimated range of 400 miles (640 km) on a full charge.”

Looking a bit like a Bolt on steroids, the sculpted front end with a short overhang is designed to direct air down the side of the vehicle to reduce drag and turbulence. A slim LED light bar runs the entire width of the fascia, and sits atop an illuminated bowtie emblem. The absence of an engine allows for the presence of the eTrunk, a lockable, weatherproof compartment under the hood large enough to fit a suitcase.

The bed measures 5-feet-11-inches and features an innovative Multi-Flex Midgate, which opens to allow access into the cabin to fit exceptionally long items up to nine feet in length. Folding the 60/40 second-row seat down increases the number to 10 feet. An optional tonneau cover keeps cargo away from prying eyes and protects against the elements.

Never before has such a high tech interior been seen in the model. A 17-inch infotainment screen takes up much of the dashboard real estate, adjacent to an 11-inch digital instrument display. The brand’s first application of Linux-based Ultifi cloud-service software drives the electronics.

A 24-module Ultium battery pack powers dual front/rear electric motors — boasting an estimated 660 horsepower and 780 lb-ft of torque — enabling four-wheel drive, that GM says will deliver the same degree of toughness as expected of a full-size pickup both on and off road including a tow rating of 10,000 pounds.

In addition, an automatic adaptive air suspension can raise or lower the ride height a maximum of 50 millimetres to clear obstacles and ease ingress and egress, and four-wheel steering provides a tight turning circle at low speeds and greater stability at higher speeds.

Buyers can bundle a 10-outlet accessory power bar to plug in work or recreational equipment, or even an accessory charge cord to help top up a fellow EV owner in need.

The 2024 Chevrolet Silverado is sold in both a standard RST and WT (Work Truck) format, the latter designed for fleet customers in mind with slightly less output and initially less trailering capacity, though a max tow package is scheduled to become available later on. A fully loaded RST First Edition (MSRP $119,948) is expected in the fall of 2023, followed by the WT (MSRP $52,448) as well as other trims.