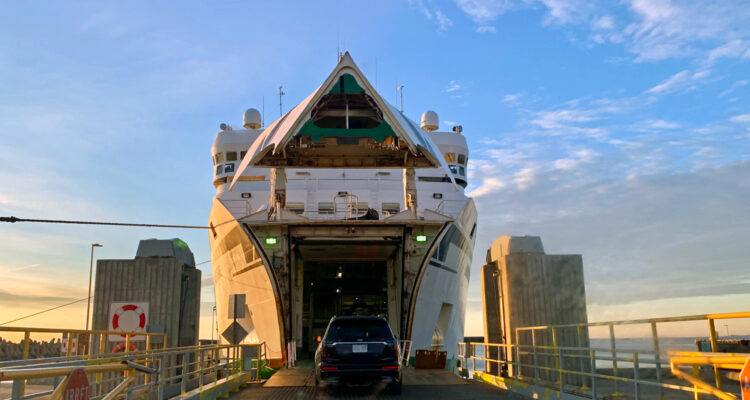 When I asked if the sea we were sailing on would get much rougher, I couldn’t understand why husband Garry’s face registered humour, instead of adopting the serious expression I required to feel comfortable. How could he know the theme from ‘Titanic’ rolled constantly through my head when I was on any kind of boat?

As a kid, I had the sensation that time passed very slowly. As a kid on a ferry ride feeling nauseated, time seemed like it stood still.

The first ferry ride I can remember was during a family vacation. We crossed the Strait of Bonifacio from the island of Sardinia to the island of Corsica.

At the time, the distance between the two islands seemed vast: the ocean, dark, roiling and ominous. In my mind’s eye, I can still see the bow of the massive ship raising, hovering precipitously at the top of its ascent, then plummeting to the ocean surface with a sickening violence.

I also remember wondering how our Peugeot 504 was faring far below deck where we had parked it. Surely the hundreds of cars, trucks, RVs and motorcycles below had been tossed about mercilessly and were now in a heap of twisted metal. How could they all possibly be intact?

Of course, the sea on that first ferry ride was not as rough as I recall and the duration , although it felt like days, after research and parental consultation, was a mere three hours. The vehicle below was not our family Peugeot but a rental, according to my dad.

So much for a kid’s concept of time and reality.

Taking a car to or from any island requires a ride on a ferry, like last autumn’s mostly smooth ride on La Madeleine from Cap-aux-Meules on the beautiful archipelago of the Îles-de-la-Madeleine (Magdalen Islands), in the middle of the Gulf of Saint Lawrence to Souris, on Prince Edward Island’s eastern coast.

The Madeleine can accommodate 750 passengers and more than 200 vehicles and has provided a vital link to the islands since 1944. The five-hour crossing is how most people arrive on the archipelago. Others come by airplane, but the ferry makes about 300 trips annually, carrying a total of more than 100,000 passengers and 41,000 vehicles.

The car ferry is an unsung transportation hero around the world.

Cable ferries are the most unsung of them all. This type of ferry has been in use since at least the 13th century with the earliest recorded one, Hampton Ferry, across the Avon River in England. Pulled by hand, there were no vehicles on this one, just monks, using a short-cut to get to their vineyards across the river.

Cable ferries can be coin-operated, powered by hand, engine, electric motor, or the current of the body of water the ferry is crossing. Cable ferries pepper the waterways of Scandinavia, Australia, Tasmania and, let’s not forget the eight cable ferries of the Saint John River system of New Brunswick.

The largest and busiest cable ferry system in the world is in Plymouth, England, in operation since 1831, moving 8,000 vehicles per day.

I find the cable ferry interesting, like an extension of the road, you drive on, you stay in your vehicle. Of course, my brain can’t help but squirm a bit: What if the cable snaps? I’m sure someone has thought this through.

Besides the humble cable ferry, some car ferries around the world are double-ended, vehicles load from one end and unload from the other. The turntable ferry is a manually-operated ferry whose deck is spun so that cars can load and unload easily at practically any slip. There is only one surviving turntable ferry and it runs between Scotland and the Isle of Skye.

The third largest ferry service in the world is here in Canada. BC Ferries carries travellers between Vancouver Island and the British Columbia mainland. This ferry service operates to other islands including the Gulf Islands and Haida Gwaii. The ferry system carries more than eight million vehicles annually and 20 million passengers.

The second largest ferry system in the world and the largest in the continental U.S. is Washington State Ferries. Every year, the ten routes on Puget Sound and the Strait of Juan de Fuca carry 10.5 million vehicles and 24.2 million riders.

The title of largest ferry system in the world goes to IDO Istanbul Fast Ferries Inc., a system of ferries that connect Europe and Asia via the Bosphorus River. The mix of vehicle and passenger ferries in this system carries 47 million souls annually.

That’s a lot of humans and vehicles on the surface of the planet’s waters at any given time.

Despite my nervousness when loading a vehicle onto a car ferry and my discomfort when below deck, I still get excited.

Do you get out of your car no matter how short the crossing? Do you watch the incoming ferry unload? Do you stay outside during the crossing to feel the wind in your hair? Yes, yes, and yes! I love a good ferry ride.