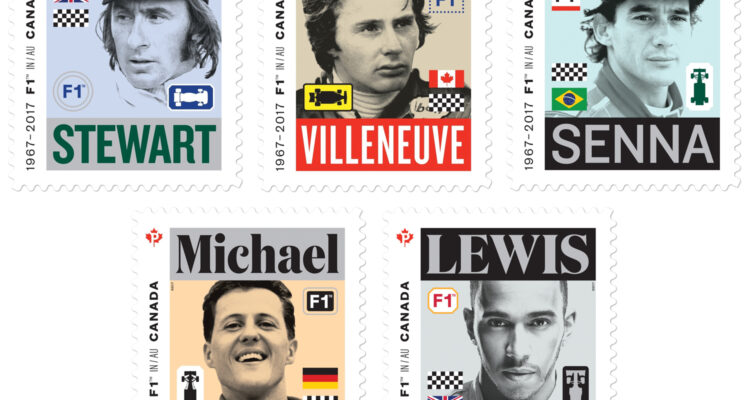 Formula 1 has been racing at the Canadian Grand Prix since 1967, with the race being held on Montreal’s Circuit Gilles Villeneuve since 1978. Some of the greatest drivers in the world have taken the chequered flag on Parc Jean-Drapeau, with even more falling victim to the wall after the last chicane. Now Canada Post is putting their own stamp on the event, honouring five drivers who couldn’t be licked at the Canadian GP.

The F1 in Canada series celebrates 50 years of Formula 1 in Canada, honouring five Canadian GP winning drivers, one for each decade of the race. Together they’ve won the Canadian race 17 times, with 16 world championships between them.

The first stamp is for Sir Jackie Stewart. Known almost as much for his signature tartan as for his safety campaigning, Stewart won the race twice, in 1971 and 1972. Stewart was on-hand in Montreal for the unveiling of the stamps earlier this week.

The ’70s belongs to Canada’s own Gilles Villeneuve. He raced with McLaren and Ferrari from 1977 to 1982, and in 1978 won the very first race on the circuit that now bears his name.

Two-time Canadian GP winner Ayrton Senna is on the third stamp. Often called one of the best racing drivers to ever take the wheel, Senna won three World Championships, and won twice in Montreal before his death in 1994.

The last stamp, but definitely not the least, goes to Lewis Hamilton. With five wins in Montreal, Hamilton has the second most of any driver. Hamilton has won three World Championships and has 55 race wins.

The stamps are available now at Canada Post. You can get them in books for mailing, uncut sheets, or even grab one of just 500 framed prints signed by Sir Jackie. We’ll take the Senna ones, thank-you-very-much.