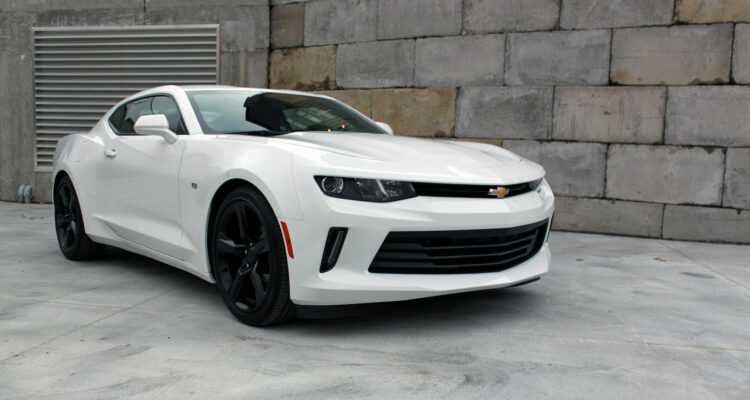 The Camaro name is an iconic one in automotive circles, especially for enthusiasts of American muscle cars.

It has been around for 50 years – so said the badge on our tester – and has been immortalized in countless movies and TV shows.

But the 2017 Camaro 1LT we drove was a little quieter that you might expect, and that is because of what is under the hood. 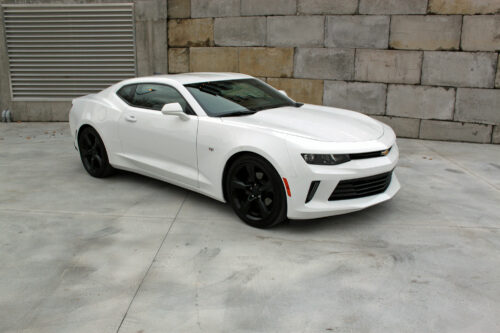 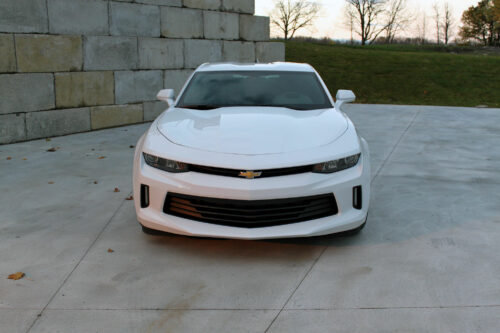 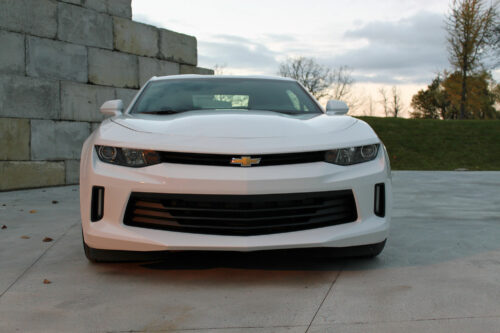 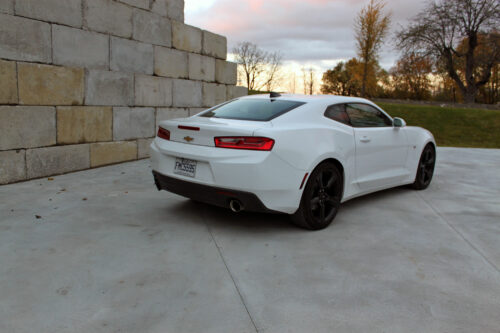 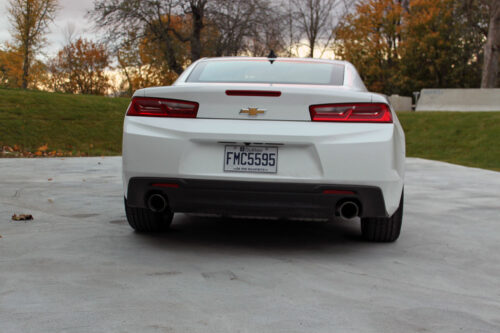 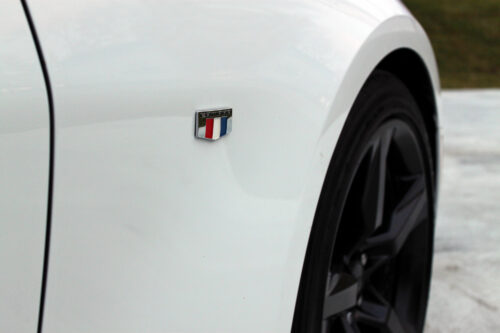 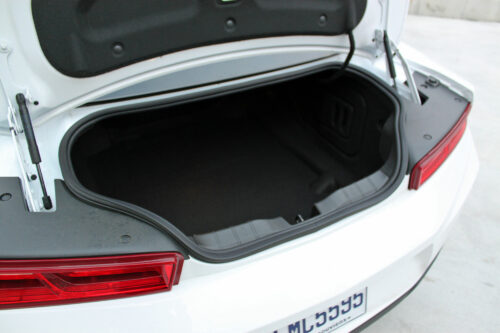 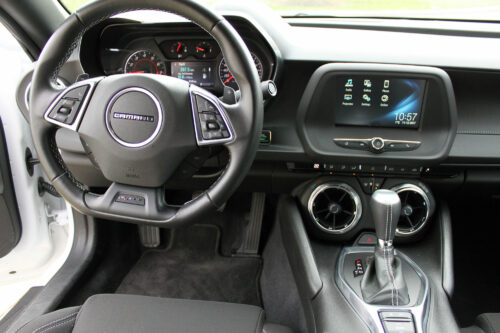 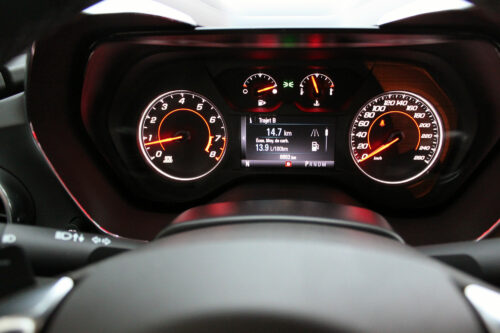 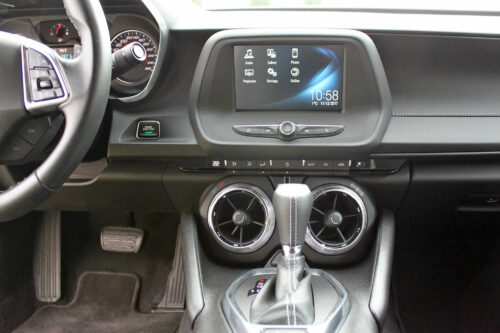 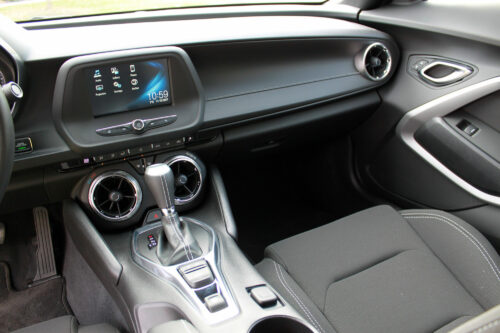 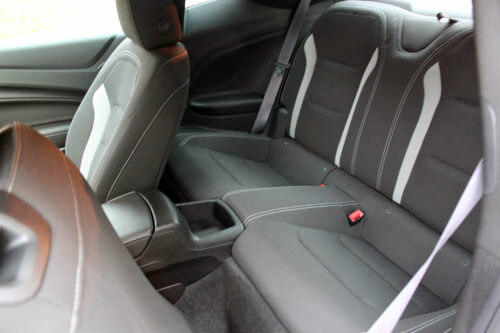 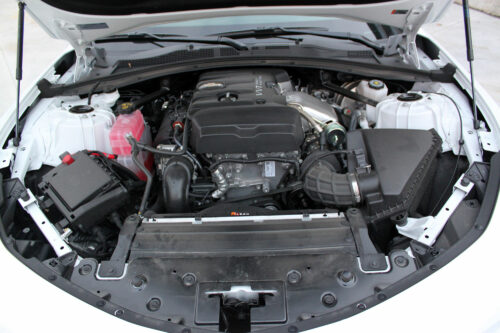 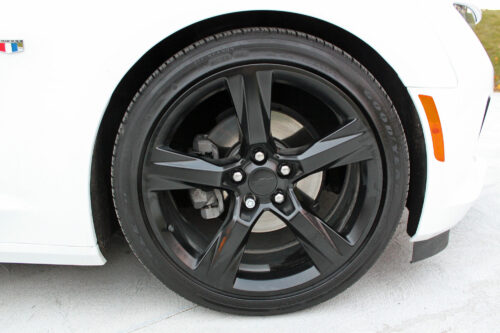 When a friend of mine found out what that was, his reply was simple: What’s the point?

Indeed, the Camaro tested was equipped with the smallest engine offered for the model, a 2.0-litre inline four-cylinder turbo engine.

When you consider that the other options are a 3.6L V6 and a thumping 6.2L V8, you can understand where he is coming from.

The engine in question produces 275 horsepower and 295 lb-ft of torque, which is put to the rear wheels through an 8-speed automatic.

In case you are wondering, that V8 produces 455 horsepower and the same amount of torque.

So, to my friend’s question: What’s the point?

Well, for starters, how about using about 6 litres of fuel less per 100 kilometres?

Offering a 2.0L engine also allows the Camaro to be a more affordable option for those who want the styling of a Camaro without the pain at the pump.

When you see the Camaro approaching, there’s really no mistaking what it is.

The black grilles on white paint setup of the tester is quite a nice look, capped by the 20-inch 4-spoke low gloss black wheels – an $880 option.

The Camaro is wide and low, so there’s not a lot of glass, which does pose some issues in terms of outward visibility.

At the rear, you have dual exhaust pipes and a very slim setup for the rear light assembly.

Also slim is the trunk lid, which you barely notice. And don’t expect a lot of storage space.

The smallness continues inside. To say that the back seat of the Camaro is a tight squeeze is an understatement.

Fitting a 4-year-old back there was a challenge, especially getting back there to buckle him up. My head still hurts from the number of times I hit it squeezing back there.

Thankfully, the front cabin area is a tad more spacious.

The cloth seats are on the comfy side and offer good support.

However, there are a few things up front that I found irritating.

For starters, the infotainment screen has a downward angle for some reason (perhaps to prevent glare?) and I found that to be distracting at first. There’s also a sea of black emptiness for the dash in front of the passenger seat.

But perhaps most annoying is the setup of the controls and displays for the ventilation system.

The dials for fan speed and temperature double as the large rings around the air vents, which are in front of the shifter.

The placement makes it difficult to access them – especially the fan speed one – especially when you are on the move. And if you have smaller hands, well, good luck.

The small display screens that show temperature are also placed right below the infotainment screen’s lip, which based on how I was sitting, made the numbers hard to read. Is that 21 or 27 for my temperature?

Oh, and there were no heated seats.

One feature that will come in handy for parents who (bravely) decided to lend the keys to the Camaro to their teenagers is the Teen Driver Feature. Also available in other GM models, it allows owners to monitor how their teens are driving. So, you want to keep getting the keys? Keep it under 50!

But even with the smaller turbo engine, driving that speed isn’t something you want to do when behind the wheel.

Power from the engine is readily available, with minimal lag and smooth acceleration though the gears.

And the ride is far from rough, which is not necessarily what one would expect from a sports coupe.

The point is, despite the smaller engine, the Camaro does definitely look the part and even with the smaller engine, is a fun drive (granted, the V6 or V8 is most assuredly more fun, but I digress).
While you might not win any drag races with this particular Camaro, you will at least look good doing whatever you chose to do with it.