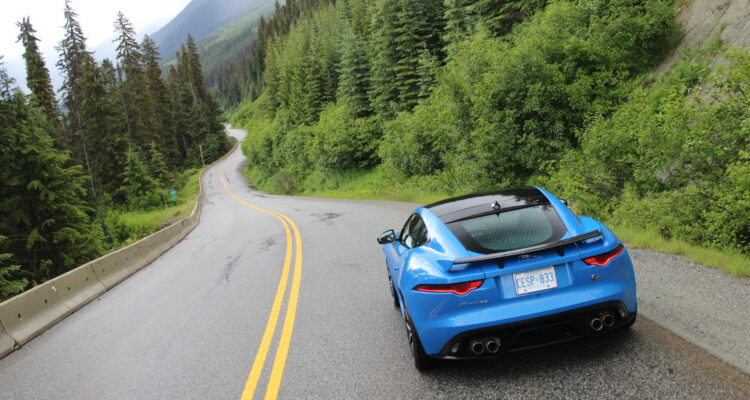 Weekends: The Jaguar SVR and The Duffey

Ahhh, summer months. We all have the memories: racing in from the yard for a glass of lemonade and ice, that cracking sound as the cubes expand. You’d have a quick sip, then run back out again, grab that Super Soaker or garden hose and give it hell. There was a scent in the air; grass mixed with flowers mixed with earth mixed with the hot concrete in the back alley; David’s Tea would call it something like “Sweltering Summer Potpourri”.

For me, that road is called Duffey Lake Road; for those “in the know”, simply “The Duffey” will do. Running about 80 kilometers between Mount Currie and Lillooet, BC, it’s a glassy-smooth ribbon of heavenly hash with surprisingly good sightlines that will engage any performance car and driver.

And recently, I had the perfect car with which to tackle it: the 2018 Jaguar F-TYPE SVR Coupe. 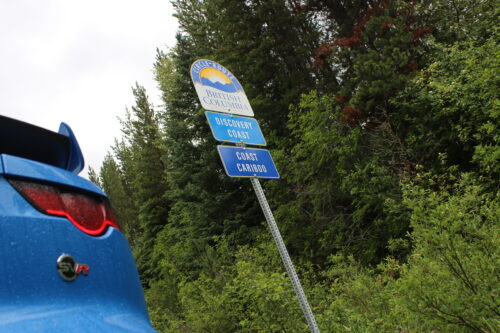 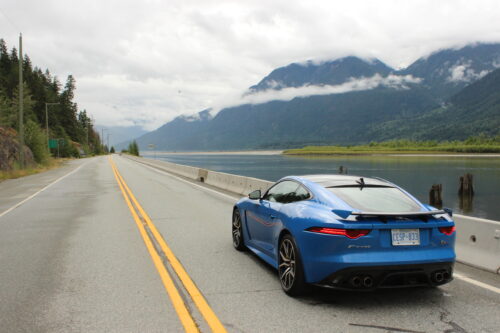 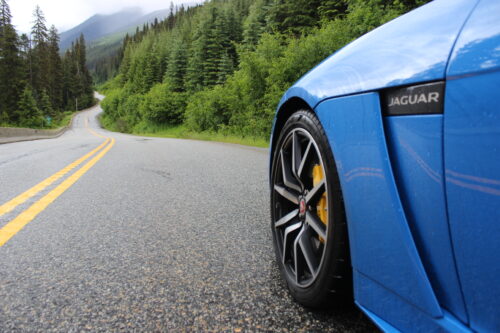 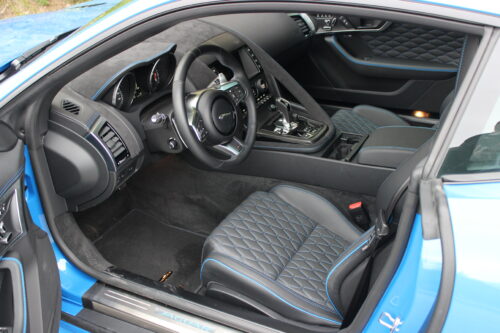 It’s the top-spec F-TYPE and one of the first models to come out of Jaguar/Land Rover’s new Special Vehicles Operation unit (an SVR from the SVO, then), which makes it a bit of a pioneer.

That’s the blueprint way of labelling it. The kaleidoscopic colour explosion that Joseph would be proud of way of saying it is thus: it’s 5.0 litres and 575 hp of snarling, supercharged V8 fury, fed through an 8-speed auto box to all four wheels and wrapped tightly in a body that may very well be the sexiest styling exercise available in showrooms today. Especially in Ultra Blue paint with yellow brake calipers (denoting the fitment of an optional ceramic braking system), as mine was. Some say it recalls racing Bugattis of yesteryear; I say it’s a way of searing your retinas that actually feels good.

If shattering your eardrums could also be made to feel good, then the Jaguar has that base covered, too. Without so much as feathering the throttle (or having the exhaust set to “loud” – yes, you can do this. Which is nice) on start-up, the exhaust crackles through the quad tailpipes loud enough to be heard from space, let alone in the various bedrooms of your in-laws’ Whistler, BC vacation home at 6 AM in the morning – Whistler sits about 50 km southwest of the The Duffey’s Western entrance, so it’s a good place to start your day. If you can, stay at the Nita Lake lodge, which stands on the site of an old train station and does a masterful job of making a modern, full-scale hotel feel rustic.

Needless to say, I made my way out quick, lest my wonderful father-in-law come out with that bewildered look on his face that you know will change to something much more sinister in short order.

This is a good time for a quick side note: if you’re planning on attempting this drive and doing so with any modicum of pace, best you get on it early as come about 9 AM, the thing gets clogged with RVs and as good as the road is overall, it’s painfully low on passing lanes. That, of course, can be taken as a sign of a great road as it means there’s probably lots of flowy, turny, fun stuff making passing a little challenging, 575 hp or no.

Through all that, though, and everything starts to come into focus. As soon as you see Lillooet Lake on your right (which also happens to be the last straight you’re going to see for quite a while), it’s go time.

“Dynamic Mode” engaged, I plant the throttle and hold on extra-extra-extra¬ tight as the SVR Coupe shoots forward like a stone from a slingshot, all four wheels (but more so the rear wheels thanks to a modifiable torque split) grabbing massive mouthfuls of the tarmac below, but not so massive as to bog you down. I have driven many fast cars in my time, but there are few that have a combination of weight and power quite like this – the closest I’ve felt to acceleration this maddening was a recent track test of the Porsche 911 GT2 RS. Even the most Powerful 911 ever made, however, doesn’t do it with quite the drama that the Jag does.

Before long, you’ve reached a set of steep switchbacks that mark the beginning of The Duffey and manic acceleration gives way to crisp, precise handling, the only caveat being steering that feels slightly numb off centre. Plus, the fact that what you don’t feel through the wheel is partially replaced by what you feel through your butt; the deep SVR-spec sports seats keep you so low to the ground and “in” the chassis that you just have to re-jig how you interact with the car.

It’s hardly deal-breaking, but when the biggest target in your sights – in the SVR’s case, that’s the Porsche 911 in GTS, Turbo or Turbo S guise – offers steering so sublime that you wonder how it’s even possible in the age of EPAS, people are going to notice if you’ve missed a beat. Jag has, here, but unless you’ve recently driven something from Stuttgart, you wouldn’t know the difference.

Even if you did, my bet is you’ll stop caring as you continue down this wonderful road, through the switchbacks and past Joffre Lakes Provincial Park (often a stopping point for those pesky RVs) and through to Duffey Lake itself. 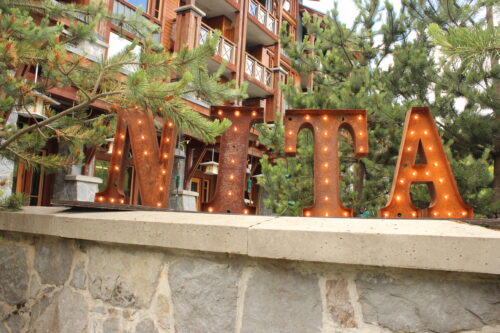 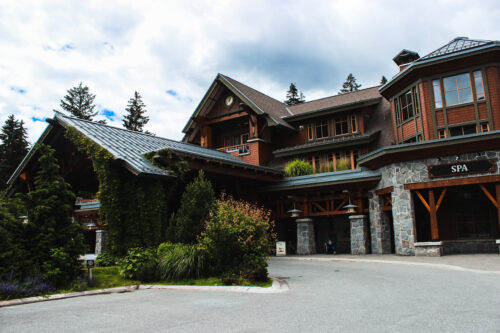 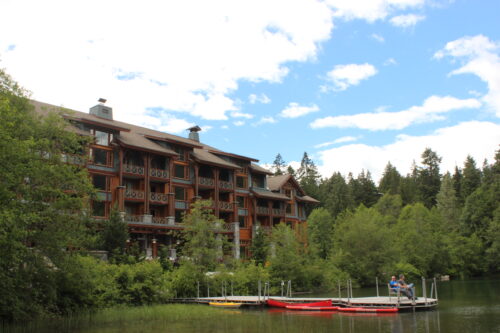 About 10 km past Joffre Lake comes one of the best indications of what this road is about. Just as Duffey Lake appears on your left, a look down a steep descent shows its truly spirally attitude, and I can’t help but stop here – every time – and just take in what I’m about to attack. Indeed, it’s no lie, no empty promise either; from here pretty much all the way to Lillooet is one of the most perfect – and perfectly addictive – stretches of road you’ll ever drive. Not to mention picturesque; the vistas you’ll come across all show why the road you’re on is signed as “Discovery Coast”.

Every camber is so perfectly carved out of the canyon, every dip and rise smoothed so as to not upset the chassis, especially when said chassis is as firm as the SVR’s. You enter a turn, allow your tires to just barely graze the grooved center line and power out, managing a quick breath before you set yourself up to do it all over again 5, maybe ten seconds later. The best part is that while I had one, you don’t need a maniacally fast car to get a feel for what this road is about; more than outright speed, it’s about a set of glorious turns that need no more than 60 km/h to really get the most of. I should know; I’ve been through here in a Golf GTI and Mazda MX-5, just as I have been in a BMW M5 and Chevrolet Corvette Stingray. And you know what? On this road, right here, it’s not so easy to say which car was more fun, engaging and engrossing than which.

Which brings us to the SVR Coupe. As much as I feel that this road is the great equalizer, I need to put an asterisk beside the Jag’s name simply because there exists so few cars as unhinged and sense-assaulting as this. The noise, the power, the chassis, the grip – it’s all dialled up to 11 – nay, 12 – in this most super fly of Jaguar sports cars, and the atom bomb-like impact a vehicle like this has on this world of EV this, hybrid that and autonomous that cannot be denied. God bless you, Jaguar. Make as many I-Paces as you want, but for the love of all that is groovy, please keep making stuff like this.

Phew. I think…yeah. I think I need some of that lemonade. Extra ice, please.