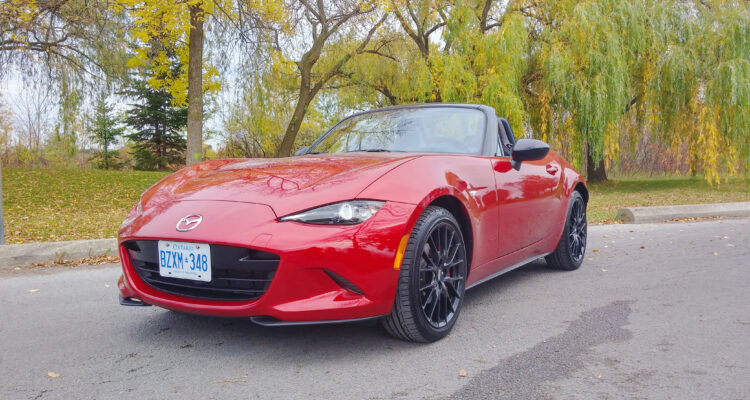 The Mazda MX-5, also known as the Miata, has gained a following of loyal aficionados since its introduction in 1989. Far from being a fast or extreme car, the model has somehow become the very embodiment of driving pleasure. I realized, when I shared that I would be driving the spanking new 2016 MX-5, how many people I knew who had actually owned one, either previous or newest generations. And no matter what generation was being fondly remembered, the comments were all the same: I love that car.

So it was about time I drove one. From the looks of it, I was 27 years late experiencing it for myself. I tried very hard not to turn into a complete sap, to play the Devil’s advocate and find genuine flaws in it. But when the liking of a model is so adamantly consistent, you are bound to join the bandwagon. And so I did.

First off, from a bubbly and charming little two-seater, the new 2016 Miata has become a sexier and more feline version of itself. The design is striking with the cat-eye headlamps and protruding wheels arches that give the hood a Stingray-like look. At the back, the taillights remind me of something that could have fallen out of Jaguar’s head of design Ian Callum’s briefcase when he raced to catch a plane. Lingering behind him, a quiet Mazda designer picked up the draft, but didn’t manage to catch up to Mr Callum, an expert plane catcher I would imagine. That being said, the balance of the design is easy on the eye. Of all the cars I have brought home for a week — and yes, Jaguars included — this one has to be the one that got me the most compliments.

On the inside, the experience is minimalistic. Everything has been designed with kilos in mind. This feather weight barely supersedes the 1,000 kg mark. So compared to the usual fancy color touchscreen crowned with an array of buttons, levers and lights, the MX-5’s dashboard looks pretty bare. The seven-inch touchscreen display is underlined by the climate controls, and a knob located on the central console allows you to navigate the computer. It’s a weird place to put a knob considering your forearm tends to lean on it when changing gears. The GS with Sport package I drove came with pretty much anything you’d want to have in a car in 2016: voice activated navigation, heated seats, full infotainment system, push button start, Recaro sports seats and such. 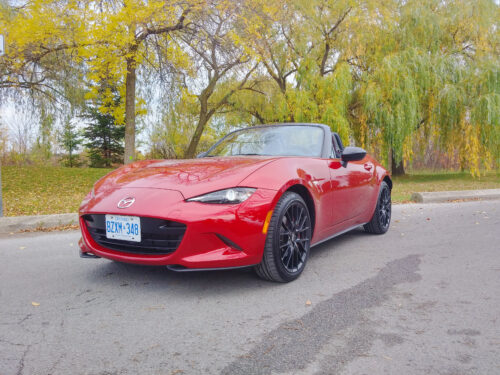 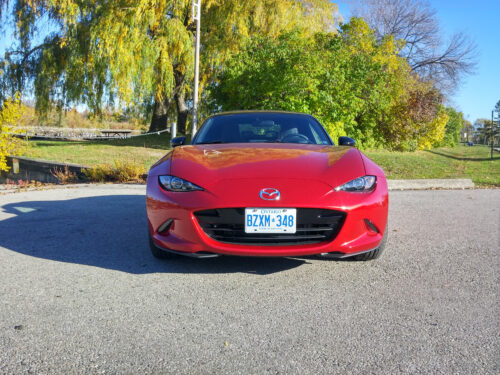 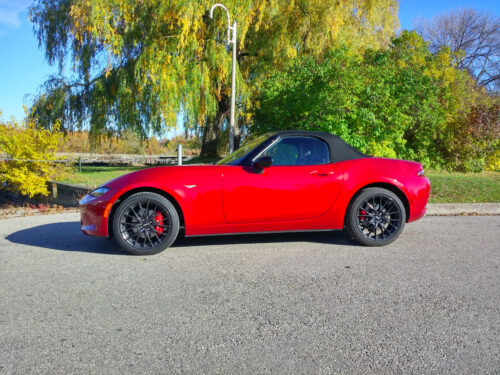 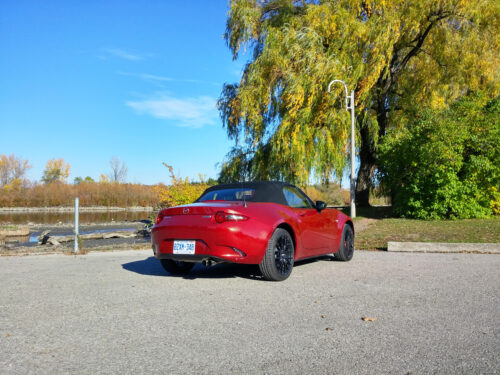 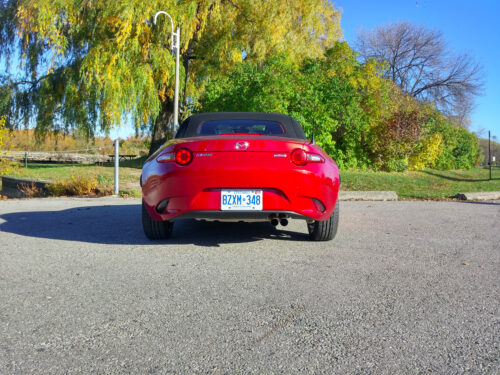 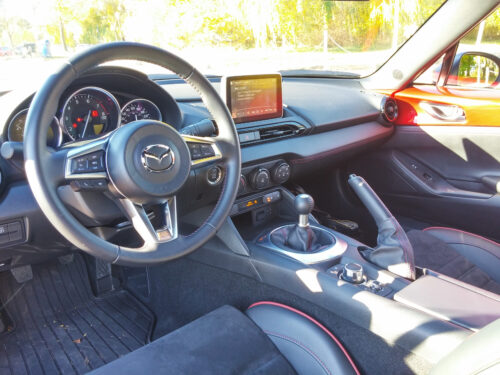 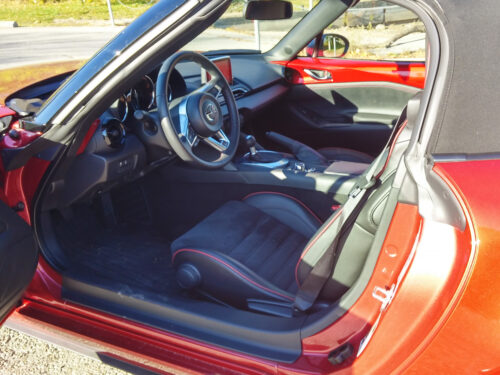 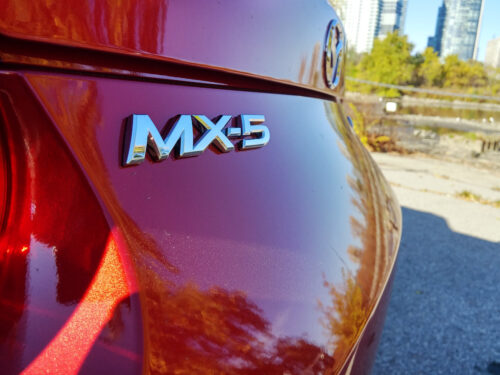 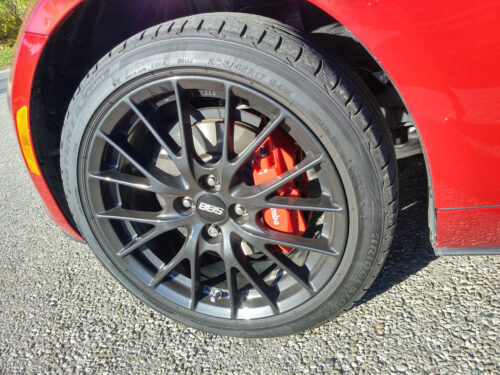 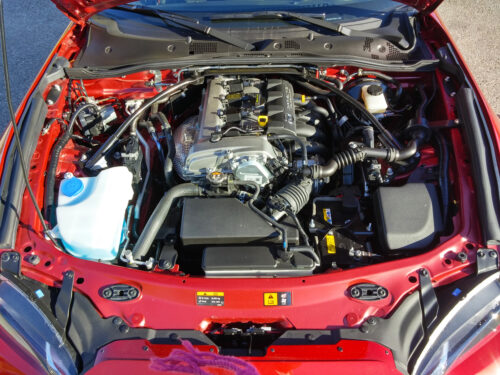 The experience in the cockpit of the Miata is very driver-centric. All the controls are displayed for the driver to easily access and the passenger barely gets anything to themselves. It’s all about the drive — if you’re a passenger in the MX-5, you’re pretty much just a conversation piece. If there is one flaw I found with the two-seater, it’s how noisy the cabin is. I understand it’s a convertible, but others have done better at soundproofing. Yet, it feels like getting rid of the noise would also impair the full Miata experience.

The 2016 MX-5 is powered by Mazda’s 2.0L SKYACTIV engine, teamed with a six-speed manual transmission. The engine is rated at 155 horsepower and 148 lb-ft of torque; power is sent to the rear wheels. Those aren’t exactly staggering performance numbers, but considering the car weighs a little more than a ton, it doesn’t need a big engine to fulfill its mission of sporty goodness. And mission accomplished it is! The car feels low and well grounded and despite being a rear-wheel drive sport coupe, it is extremely well balanced and doesn’t easily get tail happy. That’s either a good or a bad thing, it all depends on how much you enjoy doing skids. The handling is precise but not heavy; there is enough feedback to feel you are in control of the situation and not too loose, as is the case with several other cars. And that gearbox works its magic from the very first shift. The throws are short and exact, allowing for quick and efficient shifts. The same applies to the clutch that’s not heavy under the foot, nor is it ridiculously long.

As much as I like playing the Devil’s advocate, I haven’t managed to find any real flaws with the 2016 Mazda MX-5. It is nervous, responsive and without being powerful in the modern sense of the word, it is definitely a fun ride to lay your hands on. You can see and understand that every little element has been thought through with a driving experience in mind, something that Mazda has been consistent with.