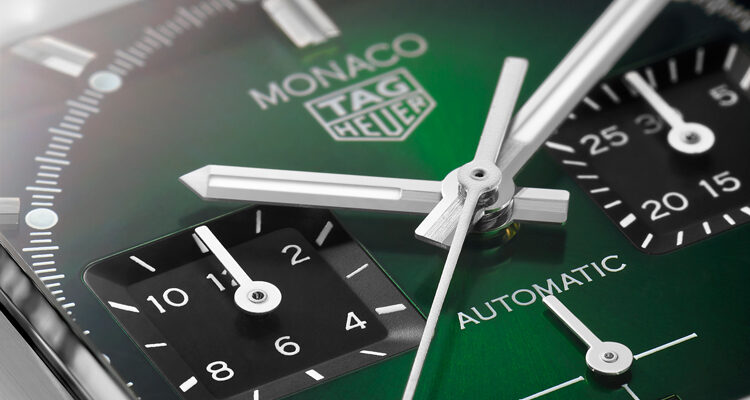 This past weekend, the streets of Monaco were once again treated to the carbureted cacophony of yesteryear’s finest as the twelfth running of the Grand Prix de Monaco Historique was held. The race, which was actually the rescheduled event from 2020, saw some extraordinary action that included an historic battle between Jean Alesi in his Ferrari 312B3 and Marco Werner in his Lotus 77, among many others.

Commemorating the event, TAG Heuer, released a special edition of their Monaco timepiece. Limited to 500 pieces, the TAG Heuer Monaco Green Dial is a fresh take on the icon that features a deep green, sunray-brushed dial. Green, it seems, is the colour of choice this year as many watch brands have gravitated to its verdant hue. The Monaco stands out with its polished and brushed stainless steel case and the recessed, black subdials at the three and nine o’clock positions. The indices adorning the dial are rhodium plated and have been coated in white Super-LumiNova and a date window is also present, just beneath the chronograph’s seconds counter, at the six o’ clock position.

Measuring 39mm across, the square-cased Monaco rides on its traditional black alligator strap, complete with deployant clasp. A domed and bevelled sapphire crystal tops the timepiece and there is a sapphire crystal caseback window as well, where green accents can be seen to have been applied to the rotor and column wheel. The Monaco Green Dial is powered by TAG Heuer’s Calibre Heuer 02 Automatic movement that offers an 80-hour power reserve.

I’ve personally always been a fan of the Monaco — in fact it is the watch that lured me into the world of timekeeping in the first place — as it occupies a rare space that straddles the lines of sporty, dressy and casual. The square case remains a fairly unique shape and the green treatment of this special edition looks stunning, despite being on trend and somewhat unoriginal. With an asking price of $6,650 it’s not what I would call a bargain. Mind you, in the years that I’ve debated pulling the trigger on one for myself I’ve seen its price double. The fact that Walter White was gifted a blue-faced version by Jesse (in Breaking Bad) and its omnipresent association with Steve McQueen (the actual watch worn in LeMans commanded $2.2 million at auction last December) will undoubtedly maintain the Monaco’s popularity, so having a rare version of a pop-culture icon may not be a bad proposition.