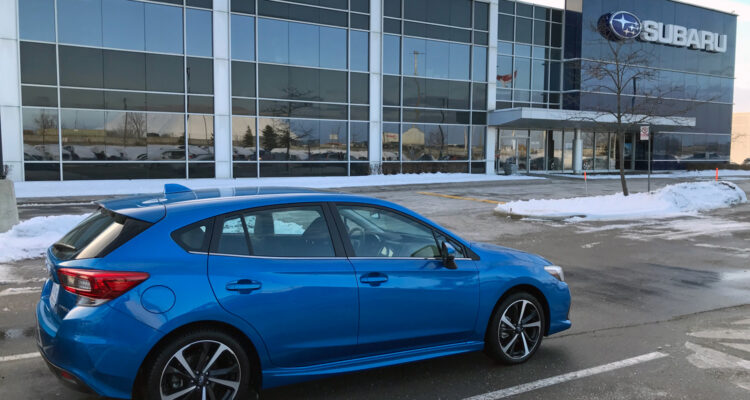 The weather forecasters were calling for doomsday which is what you tend to hear these days every time there’s a lick of snow. It was overblown but there were a few centimeters dumped before and during the Subaru S*no Problem adventure drive last Friday. Which was perfect and utterly appropriate.

S*o what was S*no Problem? A brief chance to test out a few 2020 Subaru models’ all-wheel drive capabilities in a safe but challenging and lovely country setting 50-ish km north of downtown Toronto. It gently snowed all day.

The event was really two separate events: one in the morning for automotive media and another in the afternoon for mommy bloggers and other influencers. The two were, umm, “sandwiched” by an outrageously delicious lunch created by one of Toronto’s most famous chefs from the 2000s, Jamie Kennedy. It may have been coincidental that the morning crew of auto writers was all guys and the afternoon (Angsta-grammers) boasted nary a single Y chromosome.

Anyway, our auto-dude day was comprised of four phases: 1) a 90ish-minute drive up to a hamlet slightly north of Stouffville (pronounced stoe-vil) Ontario, from Subaru’s head office in Mississauga 2) an hour’s white-knuckle effort on a winter-driving dynamics course 3) then a short drive to a private property to sample three models  on a Subaru-ready off-road course 4) then the aforementioned lunch —galantine of chicken with a winter salad — followed by a soporific shuttle back to Subaru HQ before the real snow hammer came down.

On offer for the drive up were the Ascent, Forester, Crosstrek, Outback, Impreza and Legacy (no BRZ, sadly). Big surprise, most of us requested an Impreza. The suggested route for the drive up was interrupted by an ugly collision, likely a consequence of some boneheaded Torontonian’s refusal to drive according to conditions.

Which was fine. Who doesn’t want to go off course early into a winter driving event?

The PR people from Subaru just made us promise to be at the winter course in the Greater Stouffville Area by 10am. The detour included views of such wonderfully named places as Vandorf, Ballantrae and — what no auto manufacturer wants to hear during its events — Lemonville.

Mussleman’s Lake is the place you’d expect a course for the Dodge Charger or Shelby Mustang.

However, the great outdoors has always been a significant part of the Subaru brand and experience. Today was no exception. Professional drivers set up a snowy, icy course with orange cones and coached us through multiple laps in the different models.

A series of sharp turns preceded a wide bank which allowed for some drift if you rode the course just right. Then the course culminated in a 100-metre sprint to a sudden brake and last-minute turn either to the right or the left, depending on how sly the driving coach felt.

It was a small course and an entire lap probably took less than 30 seconds to complete. But that was more than enough time to commit a series of mistakes that would’ve killed a village had we been on actual roads. My rusty driving skills gave new meaning the mental picture of melting snow cones.

(Oh, you wonder: doesn’t the AWD solve trouble on the snow? A popular Canadian belief, that. AWD is great when you’re driving and, therefore, gripping. Hold the brakes and you’re sliding like an Olympian luger.)

In sport mode, the Subaru Impreza takes on an entirely new personality. The revs whined louder and harder than a fraternity guy fighting a DWI charge. Great fun! After an hour of trading Subarus — the Legacy comes highly recommended — we drove not even 15 minutes away to an exclusive stone residence with 25 snow-covered and curvaceous acres, tastefully tucked away from the hoi polloi on quiet country cul-de-sac. 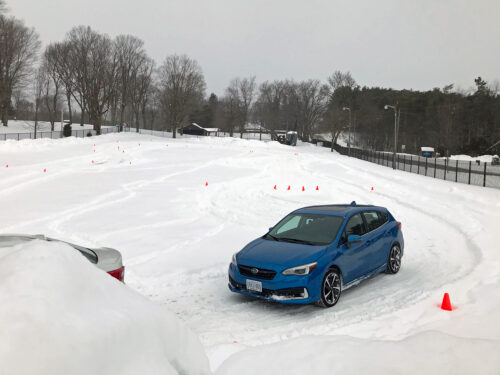 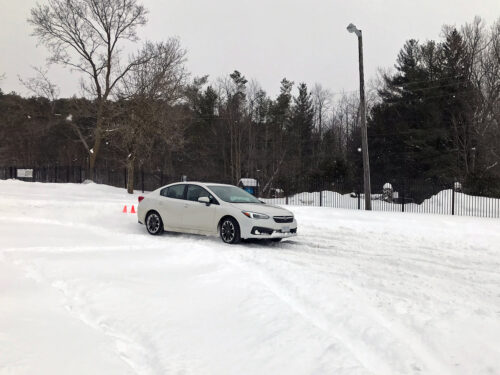 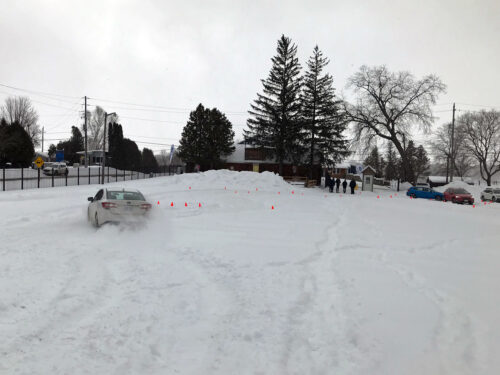 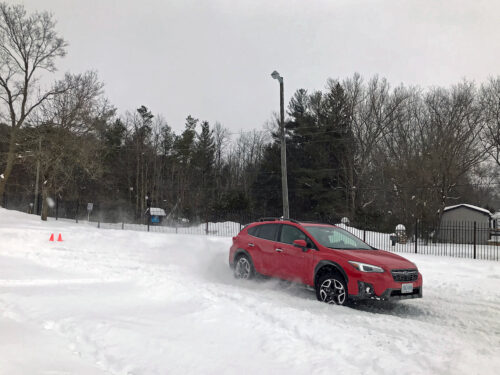 The off-road course came as advertised.

Meaning? Some driver assembly was required to successfully navigate the route without losing a rear-view mirror, deeply denting a door panel or simply requiring an embarrassing tow out of a snow-filled gulch. This is where we got to sample the SUVs, including the G.O.O.A.T (which stands for the millennial-friendly phrase, Greatest Outback of All Time, according to the recently released cheeky ad campaign) in their natural habitat.

Most noteworthy was transfer from careful slow drive to hill descent mode on a couple of short but nonetheless steep hills, whose pitch would rate a double-black diamond.

If you’re familiar with hill descent, please wait patiently at the end of the paragraph for those who aren’t. Besides, you may not be familiar with Subaru’s hill descent — in the Ascent. Unlike the usual noisy tow-chain noise you hear in other off-roadworthy vehicles, you really don’t notice the switch in the Subaru SUVs.

It’s subtle … like the duck confit croquettes and tourtiere strudel amuses-bouche we enjoyed a few minutes later inside. Some of the mommy bloggers viewed us with trepidation but the two at my table managed to get through three courses without photograph and posting about the food. It was too good to share.

We were back at Subaru HQ before 3pm, fed, watered, and sleepy but up-to-date educated.