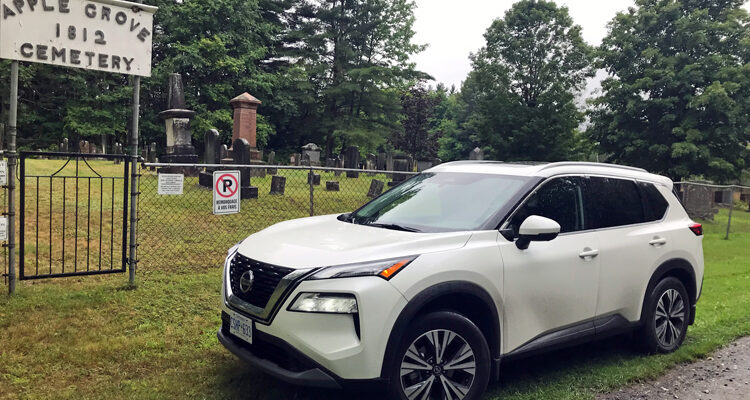 Forgive the mansplaining if you already know that the word ‘entropy’ means the gradual slide into chaotic disorder. It also describes what’s happened to central Canadian drivers’ skills over the first three lockdowns. (Not that they were praiseworthy before.) How?

We’ve all just endured sixteen months at home, plenty of time to check the tire pressure and learn how to signal lane changes with indicators. Yet, the major highways are more constipated than ever by halfwits, applying makeup, streaming the Gossip Girl reboot and texting from behind the wheel. Whoever said the road to hell is paved with good intentions never drove the 401 on a long weekend.

Enter the 2021 Nissan Rogue SV AWD we just drove. Despite its rakish name, the Rogue is a safe bet for the roads, with multiple alerts and protective detection features standard in all trim levels.

So, yes, there was a holiday two weekends ago in Ontario. The day off was named after some 18th-century political appointee whom pretty much no one knows anything about but whose name, Simcoe, will likely be gone by the first Monday of August 2022 anyway. To honour the holiday, many Southern Ontarian drivers celebrated with real-time demonstrations of entropy on our and Quebec’s busiest highways.

Glass half full? These drivers did make our long weekend feel that much longer. I was regularly reminded of an advanced driving instructor’s description quotidian driving as hours of tedium, punctuated by moments of sheer terror. This first long weekend after lockdown was similar except it was hours of terror with glimpses of tedium.

Our destination? Whichever came first: some friends’ summer home on Lake Memphremagog in Quebec’s Eastern townships, or a smoking heap on the 401 median. Capping the full day’s terrific driving, there was joy. The hilly and bendy roads near the town of Magog, rich with s-bends and deep gullies, offered a chance to test the steering, braking and cornering capabilities of the 2021 Rogue. Then we arrived. Bliss!

If you’re a fan of famous Canadian author Mordecai Richler, you’ve probably heard of this lake. It lurks throughout his books more like one of the characters than the setting. Once you’ve seen it, you understand why. It’s one of the most alluring parts of the country: beautiful and historical, yet not overrun by Torontonians. We hiked and jogged the hills, swam the warm lake, and gobbled up the local culture like the isolated soloists we’ve all become.

You can see Vermont from Anna and Norman’s place. It’s green and mountainous, hence the name. Just 4km down the road you can see a cemetery for local soldiers who died in The War of 1812 against roguish, revolting Americans.

Voted Canada’s Best Mid-Size Utility Vehicle for 2021 by the Automobile Journalists Association of Canada (aka AJAC, which I’ve managed to remain a member of for over a decade) the Nissan Rogue — in the company’s own words — ticks a lot of boxes. For instance, the tester we drove included all-you-can-eat satellite radio, an excellent distraction from the excruciatingly long and congested drive. An all new variant of Rogue, the 2021 may feel larger than its predecessors and was reconfigured to allow slightly more cargo space with the backbench down, but is actually slightly shorter.

Despite the decision to drive last weekend, I — like most AJAC scribblers — do not want to die. So, to entice us into their vehicles during this still pandemicky summer, Nissan Canada provided extras for us to scribble about. Meaning? This Rogue SV was stuffed with two brand new inflatable stand-up paddle-boards.

Have you seen two deflated inflatable stand-up paddle boards? Enfolded with disassembled paddles, fins, air pumps and crowned with two adult life jackets (Nissan doesn’t want us to die either, at least before submitting a few hundred words) the total package is substantial and ate over half the trunk space. The rest was used up by our spoilt 90-lb Labrador’s own cooler full of designer raw food, a sticky dog-bed, some favourite toys, and a half-digested sleeping bag. (Ask at your own peril.) So, apologies to the detailers who pulled the morning shift on the day the Rogue went back.

Speaking of which, if your friends’ cottage is 15km of dirt roads from paving, the $300 upgrade to ‘Pearl’ — aka dull white — is a questionable colour investment.

Anyway, even with the backseat up and occupied by a lounging 90-lb Labrador, there was still plenty of space for suitcases, beach bags, and am embarrassingly large cache of booze (the result of too much practice time over the pandemic).

Now, back to the drive!

Considering how terrifying sharing them may be, Highway 401 and its south Québec counterpart Autoroute 30, are kinda boring to drive on. Luckily, the final descent lakeside to our friends’ cottage is probably better geared for an elevator or at least a funicular than most cars: a great challenge for what AJAC scribblers call ‘driving dynamics’. The Rogue performed heroically — dynamically. Its short snout was easy to see over on the way in/down. And even after a night of heavy rain, this all-wheel drive (AWD) Rogue assimilated the ascent easily, paddling in low gear. The AWD is a $3,600 upgrade but on this 40% grade, straight up, it ticked a box. We didn’t even need the Off-Road mode.

There are five configurations you can switch between, to match the vehicle against outside conditions. If your driving life consists mostly of back-and-forth commutes on city/suburb streets in mild weather, multiple modes may not matter much. However, when you’re on a major highway — say the 401 on a holiday Monday — and, just ahead of you on an incline, an 18-wheel semi carting 50 tonnes of building supplies looks like its driver is thinking he’ll block the fast lane for seven minutes to pass another heavy semi, Sport Mode is recommended. Blast past him first. You’ll also blast past the estimated fuel consumption of 8.3L/100km, but hang the extra few quarters the escape costs you.

Off-Road mode would promote greater confidence on gravel and dirt roads surrounding the less traveled areas around Lake Memphremagog but the chunkier steering of Sport would be like icing on a take on the thrilling hills and surprising corners. And you just might want to drift slightly on the s-bends.