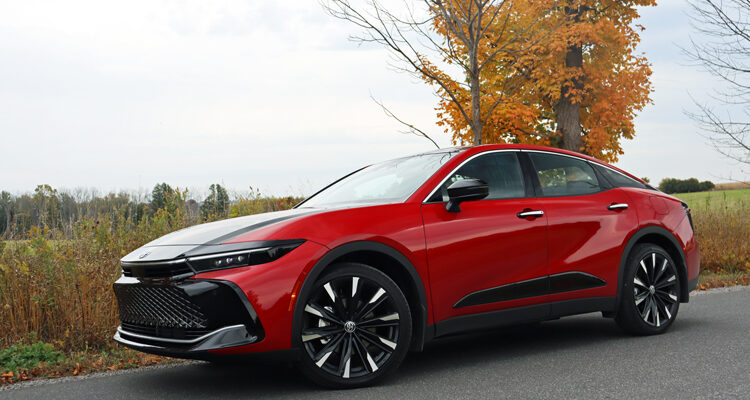 The Toyota Crown is set to make a triumphant return to the North American market after a four decade hiatus, but in a much different form than previous. Previously, this was a full-size rear-wheel-drive sedan used by taxi drivers, livery drivers and dignitary chauffeurs in and around Japan. They were often black and hand tinted windows – something like a Japanese version of the Lincoln Town Car.

Now, it returns with wild new styling, two hybrid powertrains and ready to take over top spot in Toyota’s sedan line up – if you can call it a sedan, more on that in a minute – from the defunct Avalon.

Exterior: So what is it, exactly? Well, it’s a hybrid that bears a close likeness to the four-door coupes that are starting to become fixtures in many German luxury manufacturer line-ups, that is to say vehicles with four doors and a hatch, but that have an aggressive roofline that have them looking more like two-door vehicles. Sometimes they go even further than toying with the roofline; think the way the Crown’s smaller sibling, the CH-R, has its rear door handles hidden high on what looks like the c-pillar, but is actually a door.

For its part, the Crown doesn’t get that. For starters it has a traditional trunk and its door handles are quite bold on my Platinum Hybrid MAX tester, all big and finished in bright chrome. It also gets a tall-ish ride height, though, so it’s quite tough to classify. Does it complete with the Honda Accord Hybrid? Well, the Camry kind of does that. What about a hybrid CUV like a Ford Escape or Santa Fe? Well, the Crown has a trunk and the RAV4 Hybrid exists. You could say it goes after the likes of the BMW X6 or Mercedes-Benz GLE Coupe but those are much more expensive vehicles from luxury brands so that doesn’t really work, either. And they’re bigger hatchbacks. Are we seeing the birth of a new segment here?

Anyway. From the front three-quarter angle the ultra-narrow LED headlights and large grille opening combine with the 21” dual-tone multi-spoke wheels – whose chrome accents, it should be said, have the spokes looking a little like sharpened knives – to form a styling package that looks like few other vehicles out there, and no other Toyotas. If it weren’t for the Toyota logo on the hood, you have a hard time identifying as such, so out-of-pocket is the whole shebang.

There’s more uniqueness on the rear fascia; we once again see a narrow slit instead of a light housing and a trunk detail that, while reminding a little of a baleen whale’s maw, at least provides an eye-catching detail that stands out against the all black trunk panel. The red and black colour combo, by the way, is right on the money.

Overall, though, it has to be said that when it comes to styling there is a lot going on here. I’m certain there will be people out there that find it to be a tad over-styled, likely pointing the black lower door inserts (remember when I said the colour combo was good? It is, but you can have too much of a good thing), black wheel arch extensions and perhaps even the way the black hood bleeds into the front fascia.

Interior: Inside, it’s quite a different story. Safe to say there’s actually very little in the way of flash; the dash is finished with an array of right angles and straight lines – the Camry actually has the more adventurous dash design – and the HVAC buttons are fairly traditionally styles and aligned in a tidy straight line at the base of the centre stack. There are a few details to catch the eyes you have a digital gauge cluster, as well as some bronze inserts on the dash and steering wheel that serve to break up what is a fairly monotone affair. The gear selector lever – well, it’s more of a switch, really – looks like something you might see in a Lexus but has an action that’s more akin to what you’d find in a Prius.

What you do get that I appreciate very much is the latest version of Toyota’s infotainment interface as standard (there are three trims: XLE, Limited and Platinum). Simply called “Toyota Multimedia System”—no mincing words here – is comes with a 12.3” widescreen display that also gets voice activation for a number of commands, from finding the nearest Arby’s to guiding you home. The touchscreen is responsive, the graphics are nice and after what seems like an eternity, Toyota has finally gotten up to speed when it comes to infotainment. You also get wireless Apple CarPlay and Android Auto (both pair nicely with wireless charging, which is done by inserting your device into a handy vertical cubby just ahead of the shifter), and the Platinum gets 11-speaker JBL audio, which is rather good.

The front seats are comfortable (and come heated and cooled to three levels on the Platinum) and thanks to all those straight edges, there are precious few corners on which to strike an errant knee or elbow. That’s all well and good but the real question considering that roofline and body style is how it all affects the back seat, especially in terms of rear headroom.

Which, I was surprised to discover, doesn’t impact it anywhere near as much as I thought it would even with the full-length moonroof that comes as standard on the Limited and Platinum trims. Even with the driver’s seat set for a tall drier like myself, there was room enough for my knees, and they’ve mounted the seat low enough that it’s actually usable for adults. The low mounted seat also makes entrance and egress easier, which is nice because the back doors to have to shrink to meet that roofline.

Powertrain: The Crown will be offered with two hybrid powertrains: one combines a naturally-aspirated 2.5-litre four-cylinder engine with three EV motors, while my Platinum tester gets the full-pull Hybrid MAX system which includes a 2.4L turbocharged 340 horsepower four banger with a front electric motor plus an “eAxle” rear axle for a combined output of 340 horsepower and 400 pound-feet of torque. The eAxle gets its own control unit and is able to quickly distribute power to the wheels. As a result of all this, AWD – called, specifically, E-Four AWD — is achieved not with a driveshaft, but with electric power. With the eAxle, there’s always some power been sent to the rear wheels, between a 70:30 and 20:80 split.

Drive: The AWD system plus all that power and the fact the Hybrid MAX system comes paired with a six-speed automatic (as opposed to the eCVT the other trims get) means acceleration from stop is strong and comes on quickly and smoothly so that you’re never stressed for power when it comes to passing on a two-lane road or entering a freeway and so on. Since this is a traditional auto, meanwhile, in-gear acceleration is nicely on-tap as well. There’s none of that straining we’re so used to hearing from hybrids equipped with CVTs, just a confident forward surge that is befitting of what is essentially a flagship sedan. 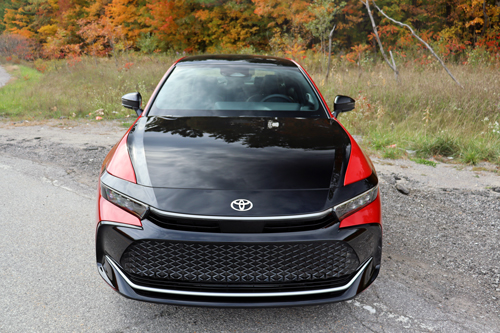 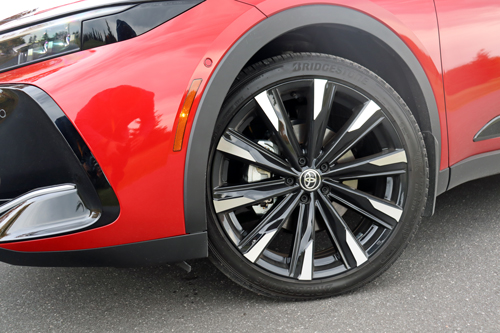 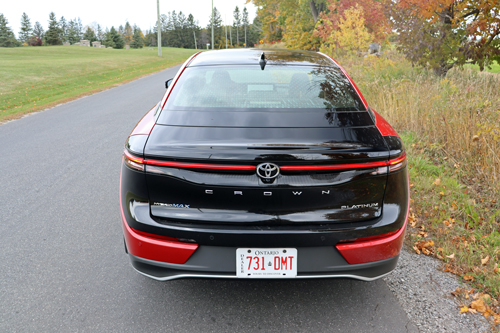 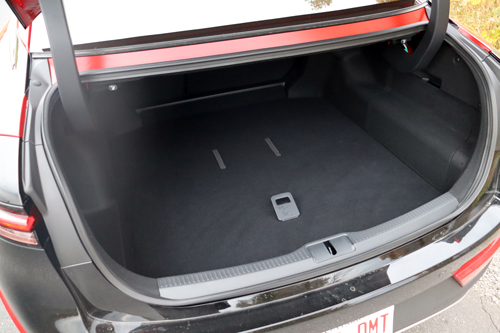 While the Crown does get ride height that skew more towards crossover-level then sedan-level, the Platinum’s adaptive damper system helps reduce the bobbing effects of a higher-riding vehicle and can meter out most everyday bumps to keep progress comfortable and predictable, even with that big 21” rolling stock. The best I could liken the ride to was that of the recently-released Venza crossover, which also impressed me when I sampled it two years ago.

For its part on this short drive, the Crown, too, impressed me. Comfort is the word of the day and that makes sense because it does essentially replace the Avalon at the top of the pile in the world of Toyota cars. That car was maybe a quality of leather away from being a Lexus product, and so it goes that the Crown has taken up that mantle. I’m looking forward to spending more time in it to get a feel for its fuel economy, but first impressions of this one when it comes to the drive are good. 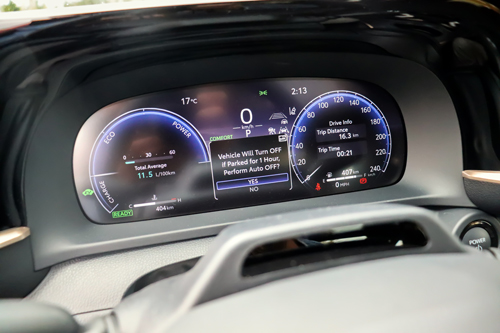 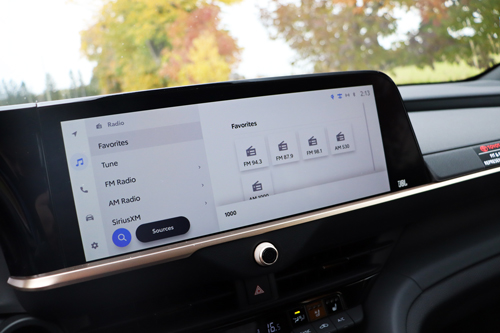 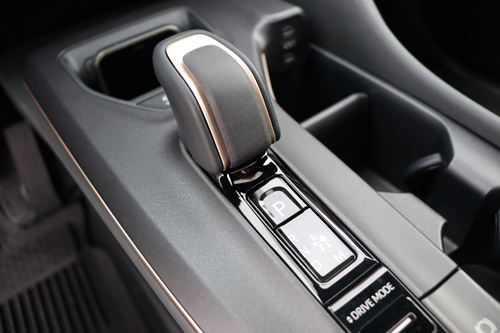 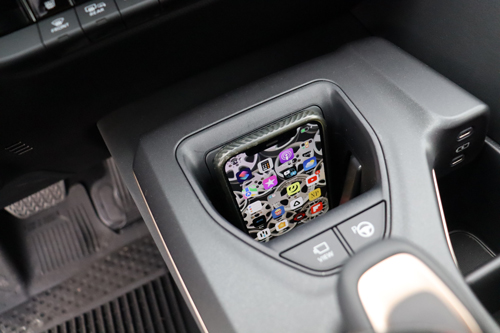 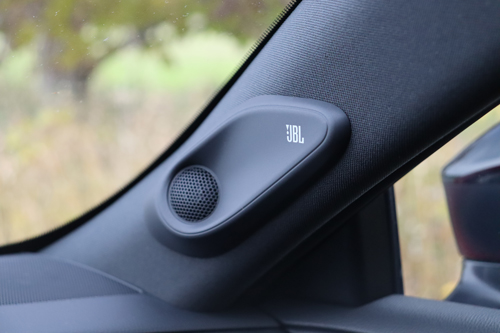 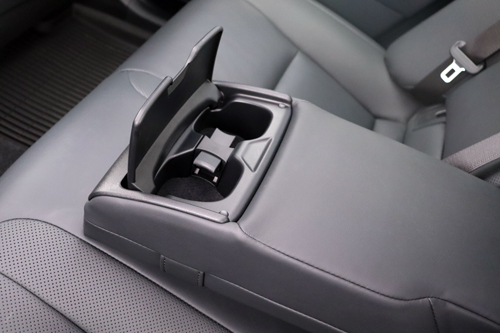 Conclusion: Like the aforementioned C-HR, the Crown is a tough vehicle to categorize. Its pricing puts it at big sedan level, but its body style is quite hard to pigeonhole, especially when one considers its interior digs and the fact that it has a traditional trunk. It’s a tough one to classify but all we know is that it presents a quite, confident drive, its looks will turn heads (one way or another) and it has the equipment required at this level, not to mention hybrid tech that everyone loves.