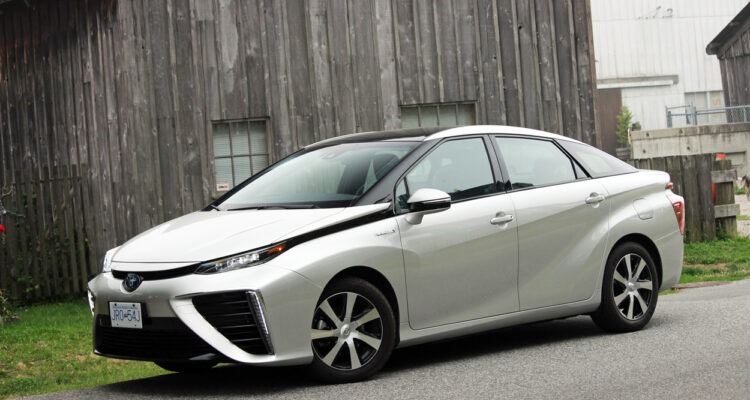 One of the cars I was most looking forward to sampling during Automobile Journalists Association of Canada (AJAC) EcoMonth event was undoubtedly the hydrogen-powered Toyota Mirai sedan.

Of course, hydrogen cars are limited in variety but since the Mirai debuted in 2015, Honda and Hyundai have made hydrogen-powered cars, or FCEVs (fuel-cell electric vehicles) available to the North American public. As you might expect, though, it’s seeing more widespread use in Japan – the Mirai’s proprietary platform is built there, after all – where even taxi drivers are making the leap to the hydrogen Toyota.

Cab drivers would surely benefit from the Mirai’s EPA-verified 500 km (312 miles) of range. And if you’re wondering why we’re talking about range anxiety in regards to a vehicle that’s not an EV or plug-in hybrid vehicle, that’s because while hydrogen is, technically, the Mirai’s fuel source, it only works as a propellant in combination with an electric motor.

Toyota claims the Mirai’s performance in those adverse conditions is just as good as what you’d get from conventional internal-combustion vehicle, which is always a concern with EVs and even with conventional hybrids. So far, so good.

Things get a little muddier, though, when it comes to discussing the process of refilling your Mirai. Right now in Canada, there is only a handful of hydrogen fuelling stations that can be used by you and me, one of which is a Shell station in Vancouver, B.C. where I live. There, they have a 700-bar (about 10,000-psi) fueling system that can refuel the Mirai’s hydrogen tanks in three to five minutes (total fuel required is 122 litres).

Yes, that’s a little longer than it would take to gas up a conventional car, but a whole heck of a lot faster than it takes to charge your EV, even if you’re driving a DC fast-charge compatible EV/PHEV or a Tesla and have access to one of that company’s Superchargers.

I’m not sure I’m expecting a large global shift to hydrogen power, but I do like the idea, especially considering the qualities the Mirai presents. 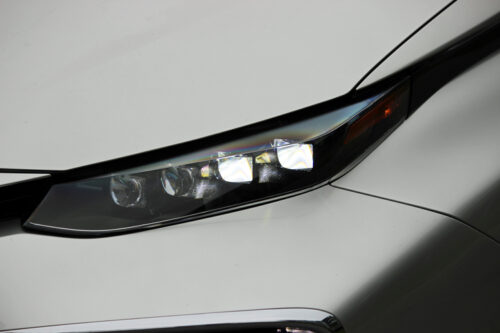 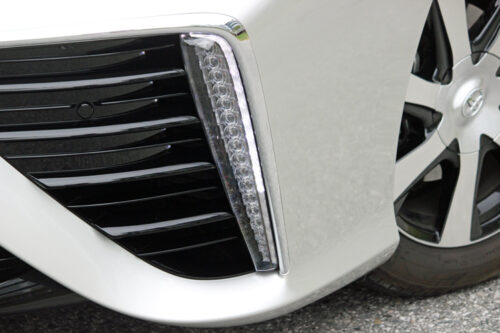 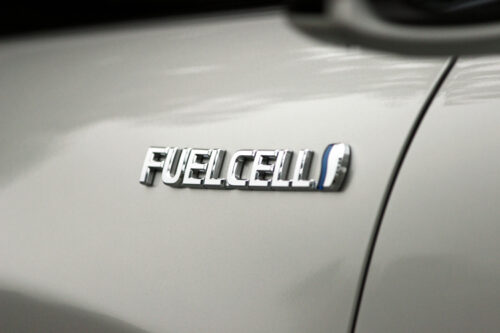 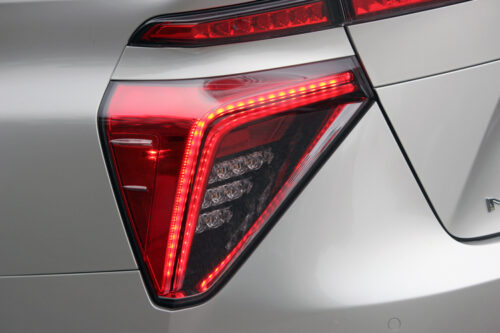 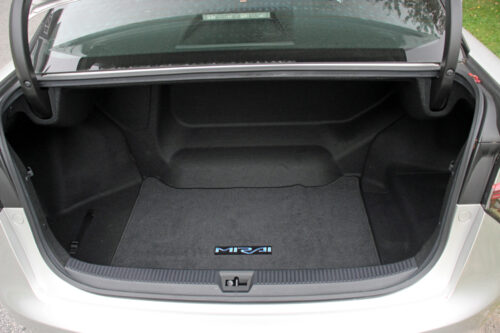 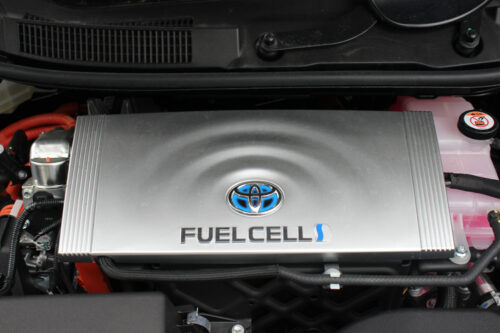 The first thing you notice – especially if you happen to sit in the back seat – is that the car is actually quite large. It’s much closer in size to the Camry than it is to the Prius, which surprised me when I first took it in. Better still, the rear seats are thickly padded and are actually a pair of bucket seats as opposed to a full-length bench. The rear passengers even get their own seat-warmers.

The large size also helps reduce the impact of the fuel tanks, which are carbon-fibre-reinforced numbers fitted below the rear passenger seat and in the floor of the trunk. The fuel cell stacks, meanwhile, sit underhood while the battery pack sits underfloor.

Having said that, though, you do definitely get the sense that all that running gear they’ve stuffed in does infringe on interior space; the trunk is small, there’s no pass-through door or folding rear seat and the rear seats only fit two.

Up front, the Mirai is as futuristic as its exterior styling would suggest. The centre console, for example, is one big, clean touch-surface bereft of any conventional buttons. It does get a sharp display screen, though, to complement two other screens – one for infotainment, and one for drive data – found inside the cockpit.

Like the Prius, there’s nothing in front of the driver except the steering wheel (your speedometer and so forth are part of the long display atop the centre dash, which features one of the most complex powertrain energy flow displays you’ve ever seen—I still haven’t figured it out) so the view forward is a clean, unobstructed one.

Power is rated at 151 horsepower and 247 lb-ft of torque, and since it is sent to the front wheels via a one-speed direct drive transmission, power delivery is instantaneous and very smooth. I won’t bore you with zero-to-100 km/h times; just know that entering the freeway and passing slower traffic on the highway was never a problem.

Underlining its good highway manners is just how quiet and solid it feels. It’s much more comfortable at higher speeds than a Prius is, and while I wouldn’t call it Lexus-like on the highway, the quiet powertrain is a step in the right direction. Because this is technically a hybrid, many of the lessons learned by Toyota in that department are applied here.

There’s regenerative braking and coasting, for example, that actually increased our range while we drove. We ended our trip with 80 km left on the range meter when we should have only had around 60 km, judging by our estimated range at the outset and distance travelled.

The infrastructure issue notwithstanding for the moment, the only other real issue I see with the Mirai in particular is the styling. Yes, it looks mighty futuristic (when it got redesigned, the more mass-market Prius actually borrowed some of the Mirai’s styling cues, especially when viewed from the rear, and especially in Prius Prime form) but that’s not always a good thing; let me point to Chevrolet’s toning down the styling for the second-generation Volt, for example.

Personally, I really don’t mind the Mirai’s exterior styling. It’s a hydro-powered hybrid that spews nothing but H2O particles out its tailpipe; far as I’m concerned, it looks like it should. Maybe tone down the pointy nose just a little, and reduce the wrap-around-ness of the tail lamp lenses, and Bob’s your uncle. 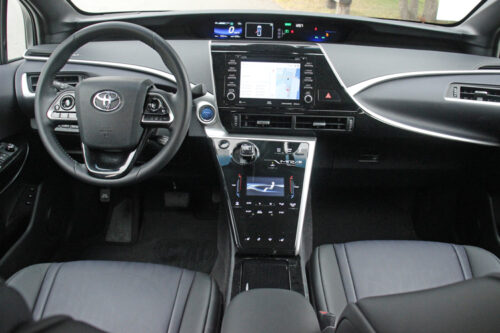 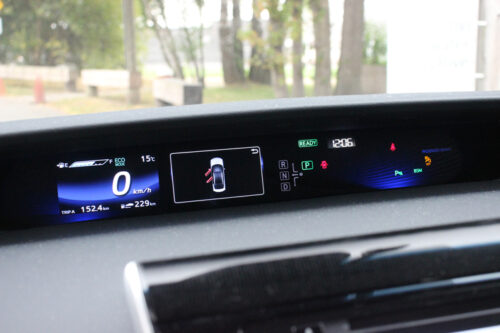 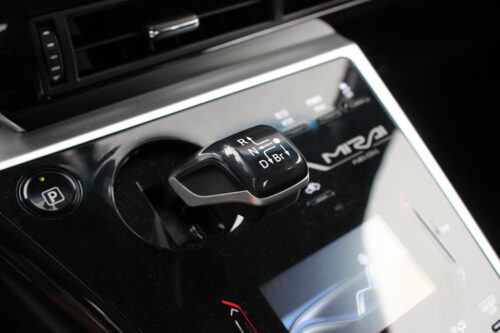 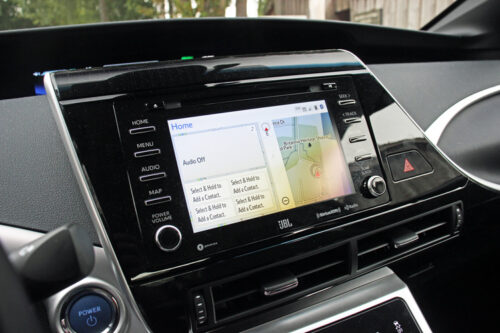 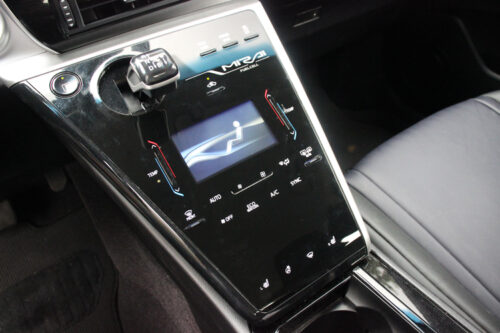 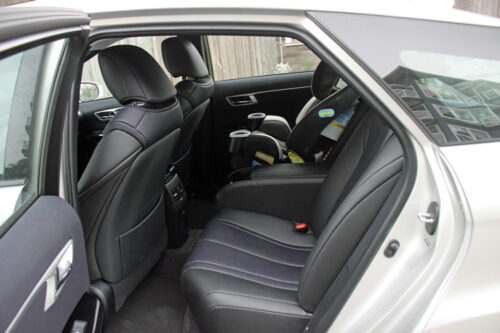 The real takeaway here, though, is that hydrogen power has arrived, to a degree. While BMW abandoned their efforts in that department, Honda has released a for-consumers version of their Clarity hatch (it’s available in the US, but not in Canada), and Hyundai released the Tucson FCEV a few years back and has since released the very futuristic NEXO.

Speaking of Canada: We remain one of the leaders in hydrogen production, and while there’ll always be arguments with how much of that we keep, and how much – if any – we export, it seems fitting that we should put those stores to use in our cars.

Of course, pressurizing the hydrogen we use for vehicle like this is an intensive electrical process, and that remains a challenge for hydrogen-powered cars. Not to mention that with increased range among traditional EVs and the existence of more and more traditional EVs, hydrogen still has a bit of a hill to climb.

Still, while there may be no free lunches, we can at least switch to water instead of soda pop.