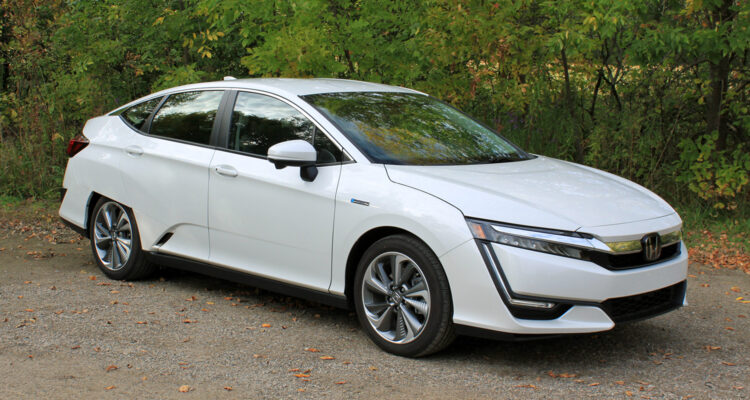 Plug-in hybrid electric vehicles are becoming more popular by the day and there’s a good reason for that. They offer a vehicle that’s Eco-friendly but without the range anxiety.

Today’s review focuses on another solid entry into the market, the 2019 Honda Clarity Plug-in Hybrid.

It’s a good choice, with up to 76 kilometres of range on electricity alone before switching over to a hybrid powertrain that delivers a total range of roughly 547 kilometres.

Sure, the styling may be a little different and won’t appeal to everyone, but the Clarity has more than enough appealing qualities to make it a worthy contender in the market.

And the Clarity is reasonably priced – once you factor in some government assistance.

Now, depending on where you live in Canada, you may be eligible for government rebates of between $2,500 to $13,000, with Quebec residents benefiting from the largest discount when federal and provincial programs are combined. 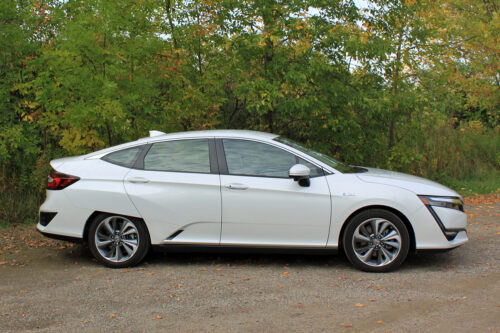 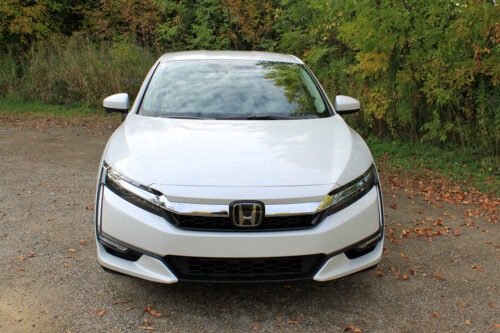 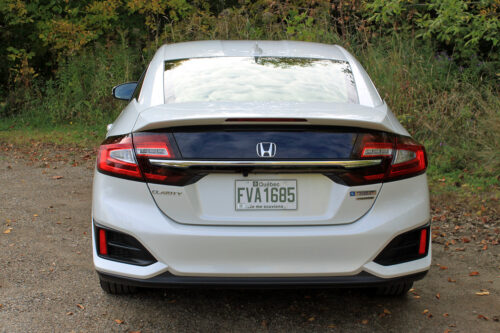 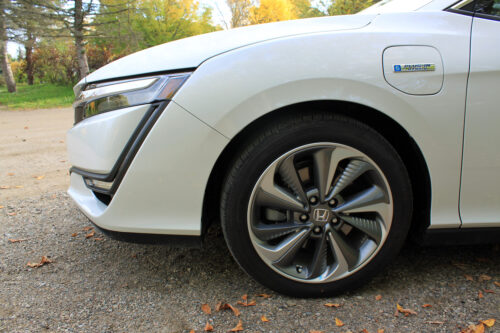 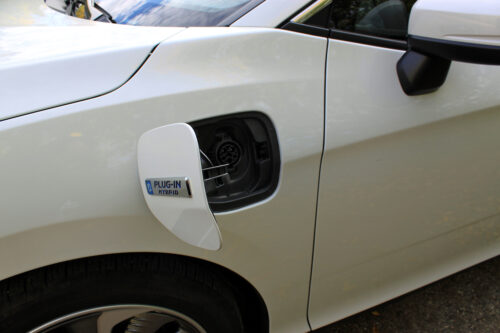 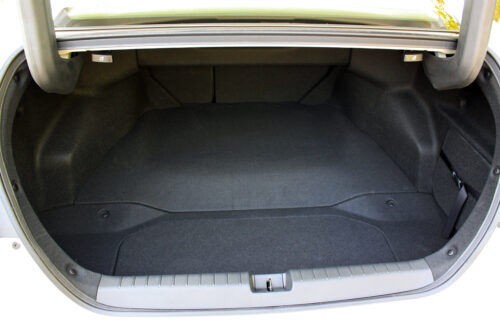 The Clarity is powered by a 1.5-litre Atkinson cycle DOHC, 4-cylinder engine and an electric motor, with power being moved to the wheel through an E-Continuously Variable Transmission.

The Clarity, especially in EV mode, pulls off the line in a hurry thanks to the 232 ft-lb of torque from the electric motor (there’s another 99 ft-lb from the engine).

The system puts out a combined 212 horsepower, which isn’t an overwhelming number, but it works for the Clarity.

Truth be told, the engine only roared to life a few time during my week with the Clarity, with most of my trips being electric only.

That might explain the 0.6 Le per 100 kilometres I achieved, well below the combined 2.1 Le/100 km that is estimated for the Clarity.

On top of the relatively small 26.5 litre fuel tank, the Clarity has a 17 kWh battery pack. It takes only 12 hours for a full charge when using a regular house outlet (120V) or just 2.5 hours with a 240V charger.

My experience with using a regular wall outlet was just fine, with a full charge every morning. Buyers would be wise, however, to invest in a 240V home charging station.

The Clarity’s styling isn’t going to win unanimous acclaim, but it makes a valid case for function over form. And the function is all about aerodynamics.

The four-door sedan has a more hatchback-like back end, and there’s a distinctive half cover over the rear wheels, which definitely makes the Clarity stand out.

The front end is pretty standard Honda fare, and it looks really good with the accent LED daytime lights.

The interior is actually quite nice, although the faux wood trim was not a hit with the family. However, the suede inserts in the dash more than made up for it and adds a touch of class.

Typical with Honda, the cabin is well designed and thought out, with the Clarity featuring a floating centre console which allows for the push-button shifter up top and a storage bin below.

There’s good space for occupants front and back, and I did notice a little pocket in the rear of the front seats that could allow rear passengers to place their cellphones perhaps. Neat idea Honda.

Speaking of the rear seat, it can get a little tight with three occupants, but is otherwise comfortable.

The driving position is excellent, as is the outward visibility and the cargo capacity of the trunk.

The infotainment system on the Clarity is acceptable, but not great. There’s an 8-inch touchscreen in the centre stack, which is good, but the actual functionality of it is not the best. There’s also a lack of a simple volume knob, forcing you to use a slider on the side of the screen or the steering-wheel mounted controls.

Thankfully, the system is compatible with Apple CarPlay and Android Auto.

Also on the positive side if how the Clarity drives. In EV mode, it’s as smooth as butter with excellent acceleration thanks to the instant torque of the electric motor. 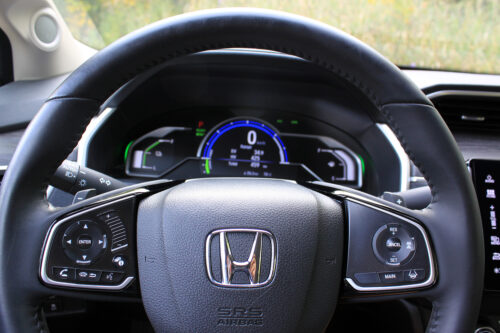 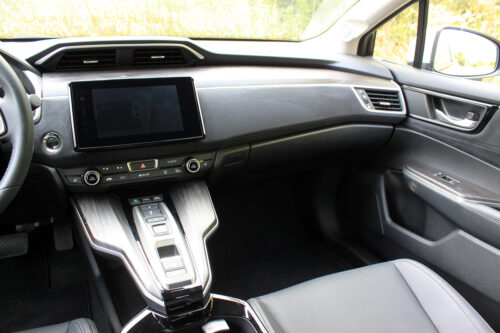 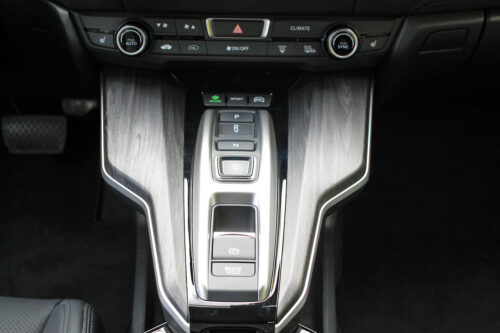 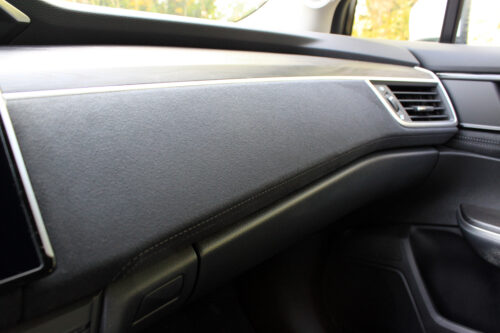 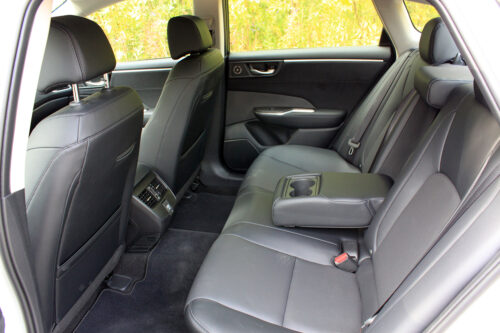 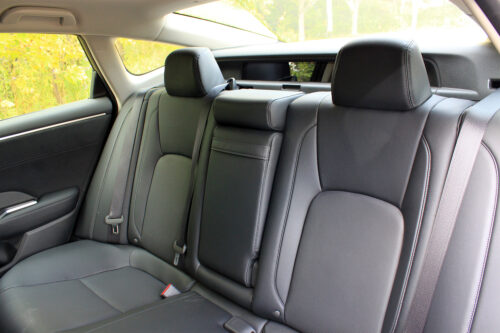 The cabin is quiet, and even when in hybrid mode, the engine noise is on the low side. I really only noticed the engine kick in because of the vibration I felt – which isn’t overly noticeable, but when you have been driving a silent EV for a while, you just sense it a little.

On the whole, the Clarity delivers a solid drive feel and comfort, with very little to complain about.

The fact I was able to avoid the gas station after a week with this plug-in hybrid was a nice bonus.

What is proved to me was that PHEVs like the Clarity are a very good choice because they provide enough range to make it to and from work on a single charge (unless you work more than 70 km from work) while being able to hit the road for a last-minute trip without any range anxiety.

So for those who still aren’t sold on a fully electric vehicle but do wish to reduce their fuel bill and environmental footprint, the Clarity should definitely be on your list.