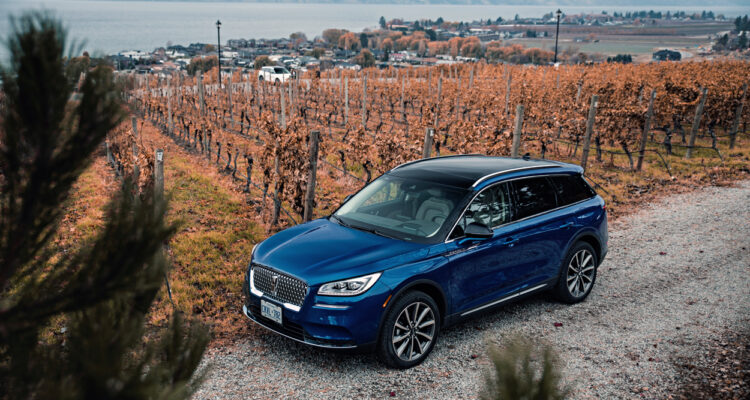 Osoyoos Is Napa Of The North

This southernmost town in the Okanagan Valley owes its name to its original inhabitants, the Syilx Indians, who called it sẁiẁs (pronounced ‘soo-yoos’) meaning “place where two lakes meet”.

Osoyoos boasts Canada’s lowest annual precipitation, and warmest climate – making it our only living desert. It’s also ideal wine growing country. And on a cold November day when folks back home are shoveling out their driveways – it’s a fine place to spend a couple of days driving a new luxury vehicle.

Lincoln’s new Corsair is the latest addition to their crossover portfolio , replacing the outgoing MKC. The compact crossover tucks in between the flagship Navigator and midsize Aviator, rounding off a lineup that has been very successful for Lincoln. Ditching their alphanumeric naming strategy has coincided with a renaissance of sorts for Lincoln, which is finally coming into its own as a luxury brand.

It makes a good first impression. The Corsair’s design is tasteful, eschewing the brash and bling that has earmarked most domestic luxury brands in the past. Instead of shouting “look at me!”, the Corsair has an elegant presence of understated luxury. Our test vehicles were all loaded, top-spec AWD Reserve models in a colour palette ranging from deep Burgundy to Ceramic off-white. Optional adaptive LED headlights frame a tasteful chain-mail-esque grille underscored on either side by a swath of LED running lights above a sliver of chrome. Subtle character lines in the sheetmetal add visual drama, and the chrome badge on its front shoulder is a nice touch. The arched roofline ends in a jaunty spoiler, beneath which the narrow taillights span the entire width of the rear deck – much like Porsche’s new rear end treatment, which emphasizes the width of the vehicle by dividing it into horizontal planes.

Lincoln refers to its cabins as “sanctuaries” and have taken great pains to relax and help alleviate passenger fatigue. Attractive without being overtly flashy, our tester’s “cashew black” cabin was upholstered in rich, creamy leather with contrasting black trim. The design is predominantly simple and clean without curves or flourishes. The dash is made up of stacked, horizontal planes, finished in contrasting leather and brushed metal trim. An eight-inch tablet-style touchscreen rises from the dash and beneath it a floating centre stack finished in piano black houses the simple knob-controls for climate and sound system. At the top of the console is a strip of gear selection buttons, which clears up space in the centre console for extra cubbies, cupholders, USB ports and wireless charging.

Replacing traditional gauges is a single digital screen. One notable feature is the head-up display, which is clearly legible through polarized sunglasses. Lincoln achieved this by coating the windshield with a film that helps block out diminishing glare. 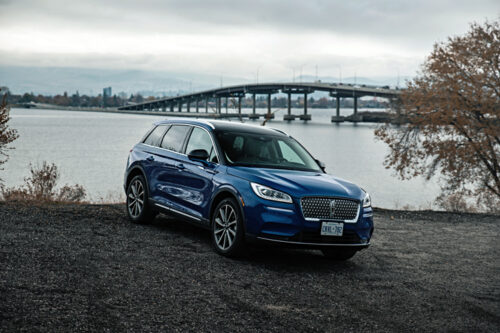 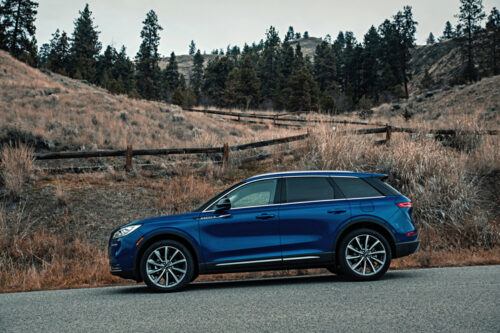 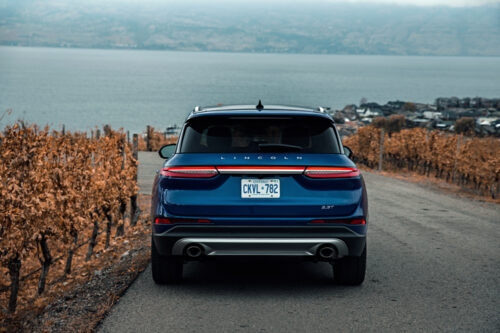 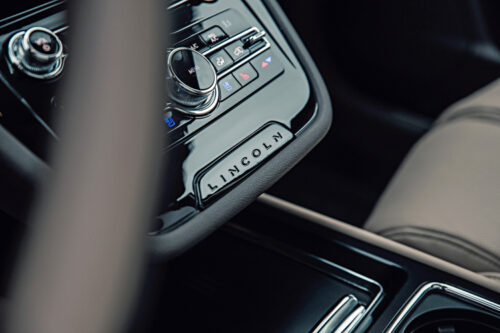 The 24-way seats are ridiculously comfortable, plump, cushiony and supportive, and blessed with a fully adjustable massage function. Controls are the same straightforward, door-located design used by Mercedes, with a separate button to bring up the massage and climate function on the touchscreen.

The back seats are comfortable with plenty of head and legroom, slide six inches fore and aft to increase passenger or trunk space, and fold down (though not completely flat) to accommodate larger cargo.

In this competitive segment, buyers expect an abundance of sophisticated technology. The Corsair’s tech list impresses with roster of standard or available features which includes automatic parking, and even smartphone remote parking for pulling out or backing into tight spaces, adaptive, speed-sensitive headlights, and CoPilot 360 Plus which includes evasive steering, intelligent adaptive cruise control with lane-centering and speed sign recognition. For those who are constantly misplacing their keys, there’s a new app that will let you use your smartphone as a key fob to unlock and start the car. This customizable function lets you program time and limits for valet parking.

The cabin is impressively quiet. Aside from laminated sandwich glass, the Corsair is equipped with noise cancelling technology, which uses opposing sound waves through the 14-speaker Revel audio system to cancel out any wind or road noise. The firewall has an extra composite sound barrier with an air pocket between to provide further insulation. The result is a quiet environment that boasts the sort of acoustic hush associated with premium luxury vehicles.

Through the valley and up into the arid Osoyoos desert, the Corsair proved to be a comfortable, capable cruiser. Although it shares architecture with the Ford Escape, the suspension is uniquely tuned and features an independent rear setup with upgraded bushings. The ride is supple, and compliant, and any body lean while cornering is well-controlled without wallowing rebound. The steering wheel is fat and grippy with well-defined thumb rests and ergonomically simple cruise and volume controls. Likewise, the infotainment system, which is straightforward and easy to operate. It’s a big departure from the previous Lincoln previous interfaces, which were infuriating in their complexity.

After a long day of driving, we arrive at our overnight destination, Spirit Ridge Resort and Spa, which sits on traditional land of the Syilx people of the Okanagan Nation. The first Canadian property to join Hyatt’s Unbound Collection, the resort is located in what’s known as the “Napa of the North”, perched above rolling vineyards and overlooking Osoyoos Lake. Claiming to “embrace the Osoyoos Indian Band’s culture through art, language, food, and stories, Spirit Ridge features an Indigenous owned winery and museum. Guests enjoy vast suites complete with kitchen, fireplace and laundry facilities and spectacular views of the Monashee Mountains.

With a noon departure time, there was a variety of activities to amuse ourselves with before clambering back in the cars. A few laps of the outdoor pool with breathtaking views of the mountains, shooting a few holes at the Sonora Dunes golf course, having a birds-eye view of Osoyoos via helicopter, or embracing your inner cowboy with a horseback ride through the foothills were just a few of the activities on offer.

Our return route took us through some curvy coastline roads, and “intelligent” cruise control proved an impressive driver’s aid as dusk fell and visibility reduced, keeping the car centered in its lane and a safe distance from other vehicles. Speed limit recognition can be adjusted to accommodate those who tend to drive 5, 10, 15 and so on above the limit. If the speed limit is 80, and suddenly drops to 60, the system will adjust the car’s speed and allow the added “tolerance” you’ve entered onto the display screen. 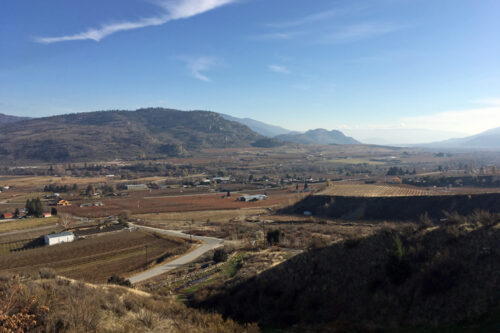 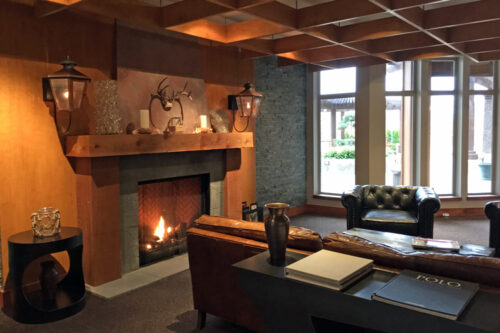 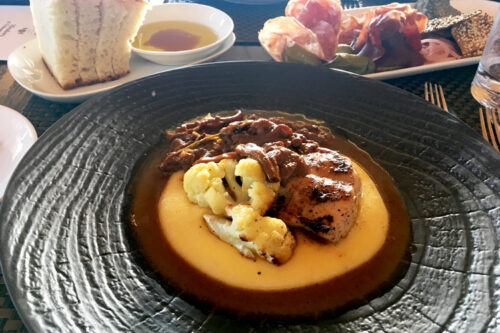 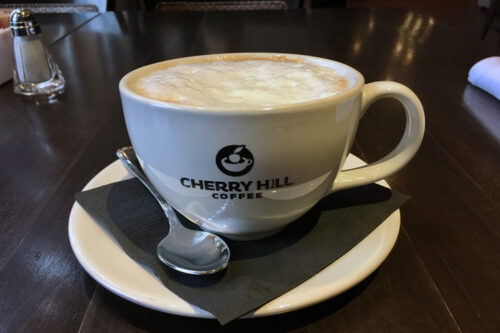 Although the Corsair is available in other markets in front-wheel-drive configuration, all Canadian Corsairs are AWD only. The base Corsair starts at $44,700, and the Reserve at $50,000. Prices climb dramatically with options; the Equipment Group (Elements Package, Lincoln CoPilot 360+) is $4,100, and the loaded Equipment Group (Elements Package, CoPilot 360+, Technology Package, Adaptive Suspension, 24-way Seats, 2.3 litre engine) is $11,350.

The Corsair, whose name is derived from a pirate’s ship, is based on the same modular platform as the new Ford Escape. But it was very clear to us after 2 days spent behind the wheel that that’s about the only similarity they share. It may be positioned as the entry-level conquest vehicle for Lincoln, but they’ve obviously wasted no effort to ensure that it’s as well-crafted and luxurious as their most premium offerings. This new entry into the compact premium crossover segment could very well become Lincoln’s bread and butter car – but it will have to go up against the likes of BMW X3, Audi Q3, Mercedes-Benz GLC and Volvo XC40. The With sleek styling, luxurious cabin, and a few tech options not offered by competitors, the Corsair is well poised to take on the most competitive segment in the market.