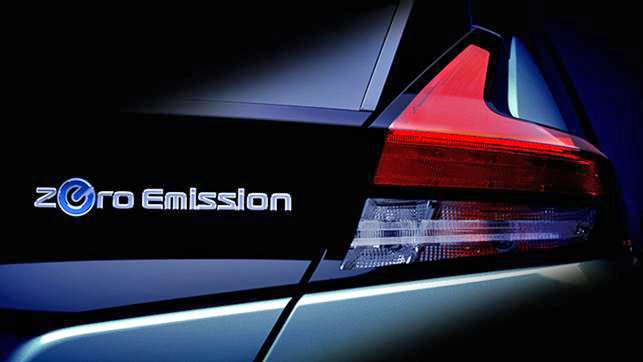 Turning over a new LEAF

I can’t claim to be the first to utter such a headline about the all-new Nissan LEAF, but come on, tell me you didn’t think it, too?!

Bad puns aside, Nissan has announced the world premiere of its all-new, revamped, restyled, and re-mastered all-electric vehicle, the LEAF set to take place on September 6th in Japan. The compact electric vehicle’s unveiling will be brought to you live online, and you can watch that by subscribing to Nissan’s Global YouTube account or by following @nissanmotor.

A teaser video was released by Nissan earlier this week, and while it really doesn’t give away anything “new” about the vehicle — we’re aware it will be fully electric, offer zero emissions — it does give away a bit of the design cues we hope actually make it onto the new Nissan LEAF thanks to the cartoon silhouette in the video.

There’s no denying, the LEAF was never considered the best-looking EV on the market, and with vehicles like the all-new Chevrolet Bolt, the e-Golf and the upcoming Tesla Model 3 all within the (hopefully) same price and electrical range, it could very well come down to the look.

As far as new technology included in the updated Nissan LEAF, the video alludes to enhanced safety and vision technology, and Nissan claims it will offer the latest and greatest from the Japanese automaker in terms of onboard gadgets and gizmos in order to the make the LEAF both safe and ultimately as efficient as possible as a fully electric vehicle.

So, mark your calendars and make sure you tune in for the launch of the all-new Nissan LEAF in a few weeks. Adding another fully electric vehicle to the market is a good thing, and Nissan pioneered the way with their LEAF initially when it was first launched in 2010. Can they reposition themselves at the forefront of electrification with vehicles with the latest LEAF model? We’ll have to wait and see. The anticipation is electric…