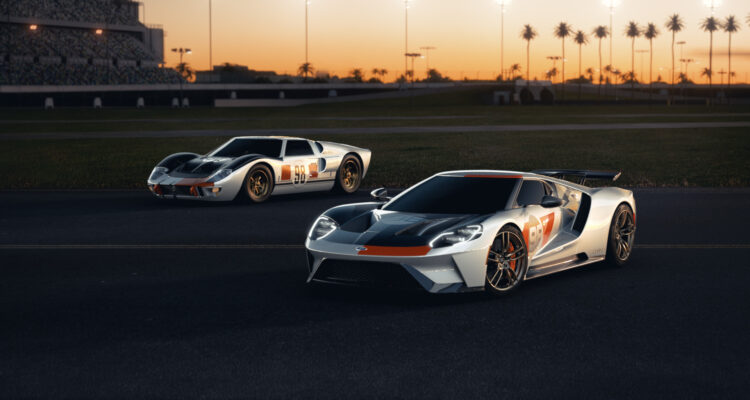 If you’re a car person – or just a movie person in general – and haven’t yet seen 2019;s Ford v Ferrari, you should. The quasi-non-fiction racing epic stars Christian Bale as race driver Ken Miles and Matt Damon as car salesman-cum-designer Carroll Shelby, two men that were integral to Ford’s defeat of Ferrari at the 1966 Le Mans endurance race.

So important was that win that not only has it spawned countless books, articles and now a full-length Hollywood feature film, but a special edition of the current Ford GT supercar, as well.

The recently-announced Ford GT Heritage Edition is the latest in a line of special GTs that have celebrated race victories throughout the Ford GT40’s storied past.

The 2021-2022 (just 40 will be available over those two model years) version, though, is even more special in that it’s the first Heritage Edition GT to not be celebrating a win at Le Mans.

“The Ford Performance team crafted a limited-edition model that honours the 55th anniversary of the Daytona 24 Hour endurance race that would eventually lead to our successes at Le Mans,” said Ford GT program manager Mike Severson.

In essence, that win at Daytona is what sparked years of endurance racing success for the Ford GT40.

If you believe what the movie tells you, meanwhile, it was that Daytona race that was so integral for Miles’ Le Mans chances later that year. I’ll leave the rest of that story for the movie to reveal.

Anyone who’s familiar with the ’66 car will immediately recognize the colours of the Heritage Edition. Finished in white carbon fibre with red accents and carbon fibre hood, this car is a modern take on the same one Miles and partner Lloyd Ruby drove that year. It even gets the asymmetrical red detailing on the hood’s leading edge, the roof and rear spoiler that the ’66 car had. A modernized take on the old car’s “98” racing number graphic adorns the doors. Gold 20-inch aluminum wheels and Brembo brake calipers finished in red lacquer complete the look.

Inside the changes aren’t quite so numbered; black Alcantara suede covers the steering wheel and pretty much the entire dash, while anodized red shift paddles and red-and-black Alcantara seats help brighten the interior.

If that’s not enough, the GT Heritage Edition can be made even more special by adding a package – yes, this special edition car actually has an option package – that swaps the gold wheels for carbon fibre items that also get a red inner barrel and the red calipers are swapped with black ones. Inside “ghosted” 98 graphics are seen on each door.

Personally, we like the gold wheels of the “normal” car. But that’s us.

If classic homages aren’t your thing, 40 GTs over 2021-20220 will also come as part of the “Studio Collection” that offers special colours and graphics that highlight certain aspects of the car such as the rear buttresses, the fuselage and cooling ducts.