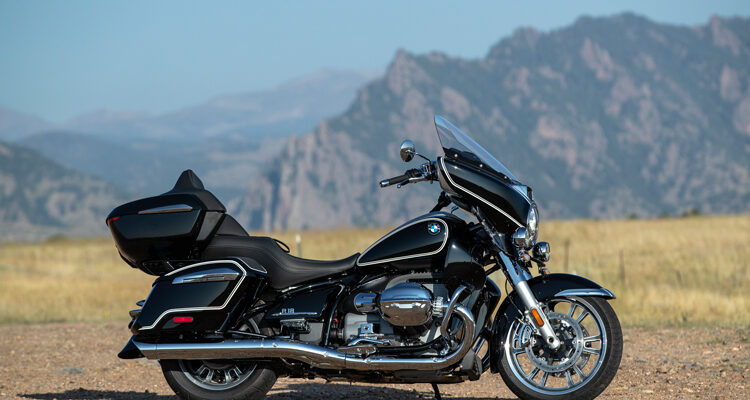 The road ahead unwinds in a series of successive bends through the BMW R18 Transcontinental’s windscreen, demanding my near undivided attention. Yet I can’t help but to look down at the instrument panel occasionally, to confirm that I’m actually riding a German-made motorcycle. Every BMW motorcycle I’ve ridden in the last decade or so has exhibited a level of refinement that only a centenary manufacturer can achieve. The R1250GS, for example, has an engine so smooth, and electronically adjustable suspension so plush that it feels like you’re gliding on air — and that’s an adventure bike. But not this bike.

I look down at the instruments and confirm that there are, indeed, three blue-and-white BMW roundels: one each in the speedometer and tachometer, and one embedded into the panel between them. And one final reminder affirming that this motorcycle left the same factory that has been building German boxers for a half century, is a statement at the bottom of the speedometer face boldly proclaiming in capital letters: BERLIN BUILT.

Then why am I so perplexed? For starters, blipping the throttle while at a stop causes this massive touring cruiser to lurch sideways to the left, almost in anger that you’re not yet in gear and rolling. This is a characteristic of boxer twins from at least a decade ago that has been counter-balanced out of modern boxers like the GS, to make them more palatable to a newer generation of riders. But not on the R18. This engine is devoid of a counter-balancer, causing the bike to not only lurch sideways when the throttle is blipped, but it also emits a deep, reverberating vibration at speed that asserts itself as a massive chunk of metal on two wheels. And visible atop each massive 902 cc jug are chromed tubes that contain valve-actuating devices that are mostly of a bygone era: Pushrods. I look down at the instruments again…

This imperfection is deliberate. It’s meant to stir emotions. And it works for me. The feedback is visceral, it’s engaging, and if you like being connected to a motorcycle that has character, the R18 oozes it in spades. But it doesn’t just boast this built-in character; the R18 Transcontinental, and its pared down sibling, the R18 Bagger, are downright competent long-distance machines.

These two new touring cruisers are offshoots of the 2020 R18 cruiser, a bike that borrowed styling cues — and spirit — from the 1936 BMW R5. The Transcontinental ($29,500) comes with auxiliary lights, a tall windscreen, engine guards, a 48-litre top case, a heated seat for rider and passenger, and silver engine cases. The Bagger ($26,945) is stripped of the extra lighting, engine guards, top case and seat heat, has a shorter screen and lower seat, and matte-black engine cases. Both bikes come with a Marshall sound system, 27-litre side cases, and keyless ignition.

At the heart of the twin-downtube steel frame is a horizontally opposed twin displacing 1,802 cc. It claims 91 horsepower, and 116 lb.-ft. of torque that peaks at just 3,000 rpm. Oh, and in keeping with those old-fashioned pushrods, the R18 has old-fashioned locknut-and-screw valve adjusters to make maintenance at home a snap.

Extra gusseting strengthens the frame around the steering neck area, and chassis geometry is less cruiser-ish, with a steeper fork angle and a shorter wheelbase. This is a long motorcycle, nonetheless, with the wheelbase stretching to 1,694 mm. Increased rear suspension travel (from 90 mm to 120) provides a much more compliant ride. The rear suspension is also self-levelling, compensating automatically for load. However, that’s the limit of the suspension’s adjustability.

The cockpit mixes classic and modern instrumentation, with four analogue gauges displayed above a 10.25-inch TFT colour screen. Among the gauges is one that’s called a power reserve meter. Borrowed from BMW subsidiary, Rolls Royce, it reads the percentage of power available based on engine load. An analogue clock would have been a welcome substitute for this rather pointless gadget.

Menus within the TFT screen are prompted via handlebar switches to control your Bluetooth-enabled media device; the screen can be used for navigation (through a phone, using the free BMW Motorrad Connected app), and, unfortunately, for selecting handgrip heat level — a single handlebar-mounted button would have been a simpler setup. You can also select ride modes, which are cleverly named Rain, Rock, and Roll. Each mode adjusts engine braking, traction control and throttle response, with Rock providing the most aggressive settings. There’s an enclosed phone pocket atop the gas tank that includes a USB-C port, and it has a fan to cool your phone if you use it for navigation while plugged in.

Despite its reasonable 739 mm seat height (718 mm for the Bagger), lifting the Transcontinental off the side stand for the morning ride takes a herculean effort. At first, I thought I’d gotten soft after not having ridden a big touring bike in more than a year, but a look at the spec sheet confirmed that I was still somewhat fit. The TC weighs an astounding 426 kg wet. There is only one motorcycle that weighs more than this BMW: The Yamaha Star Venture TC, at 437 kg. The big boxer engine alone weighs 111 kg, which is as much as a ready-to-ride Honda CRF450R motocrosser. To help counter the mass when parking, an electric reverse gear is optional.

Launching the bike takes a fair amount of clutch slippage, as first gear is quite tall, and the bike is hefty. My test bike is equipped with a hill-hold feature, which is activated after applying either brake with force and releasing it. I disabled it since it required even more clutch slippage to overcome. The six-speed gearbox requires only a light touch at the heel-toe shifter.

The bike’s mass doesn’t melt away with speed, and despite exhibiting neutral steering, it takes a fair amount of manhandling to manoeuvre the TC along winding roads. Adding a passenger and luggage will only exacerbate this. Cornering clearance is as expected on a touring cruiser — sparks fly relatively early in the lean.

On the open road, however, the TC is impeccably stable, it has a very comfortable riding position, stellar suspension compliance, and it offers excellent head-to-toe wind protection that’s free of buffeting. The handlebar-mounted fairing has adjustable wind deflectors that effectively direct a cooling blast of air to provide relief from heat. The TC also has partial fairing lowers that cut windblast to the legs, while the jutting cylinders take care of the wind below the lowers. The only caveat is that the top edge of the non-adjustable windscreen was right in my line of sight, forcing me to either squat down to look through it, or sit bolt upright to look above it. This wasn’t a problem with the Bagger’s lower screen, though it did produce a fair amount of buffeting at highway speeds. A 24-litre fuel tank should be good for about 400 kilometres, as the bike claims 5.8L/100 km.

Active cruise control makes long, mundane stretches of highway easier since it maintains a pre-set distance from vehicles ahead. It works fine if you’re following a car or truck, however the system’s radar won’t detect a motorcycle if it’s off to one side of the lane; it has to be directly in front of you. 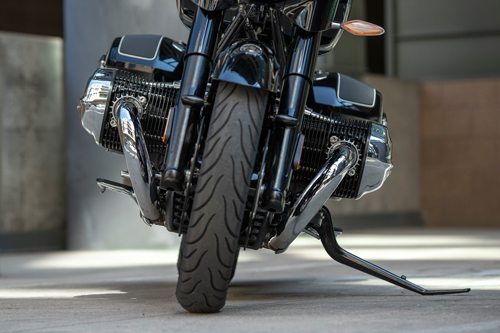 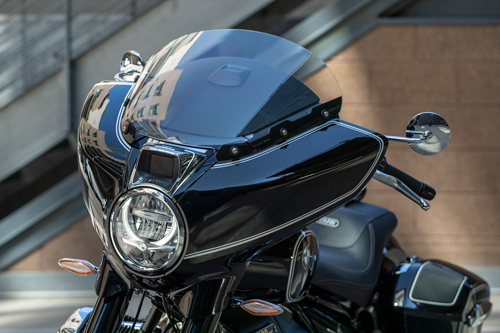 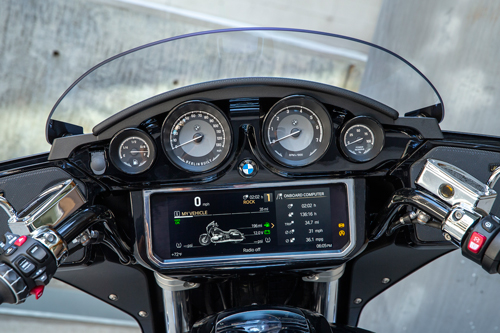 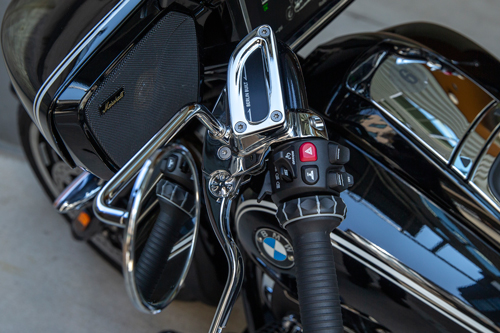 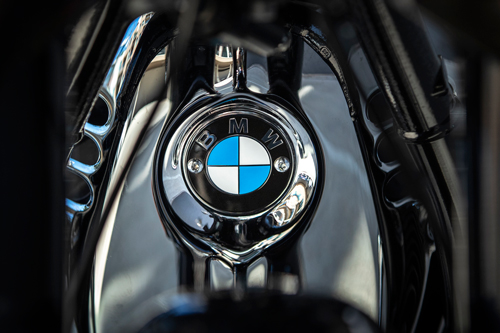 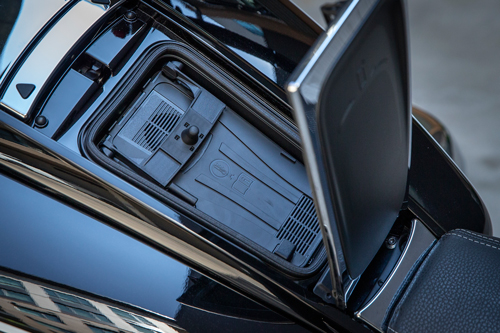 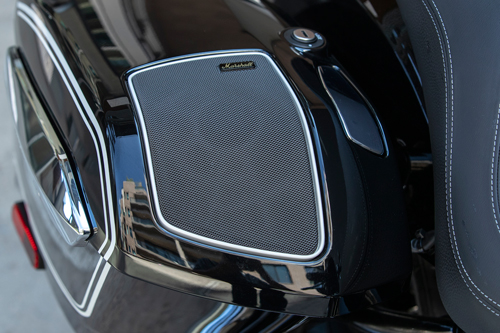 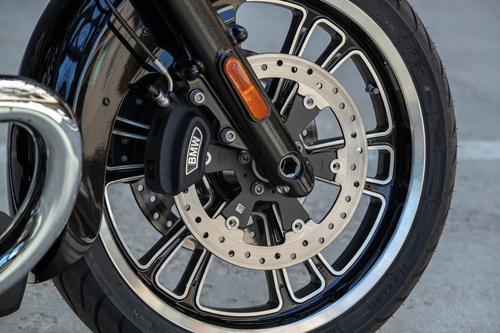 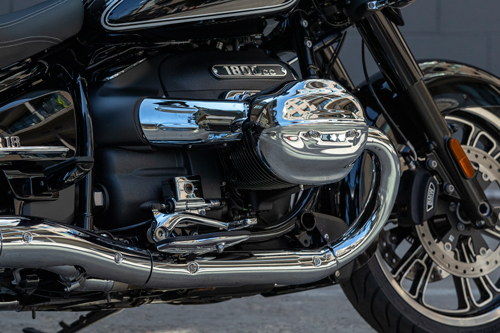 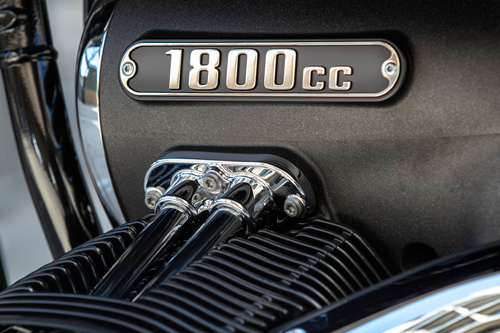 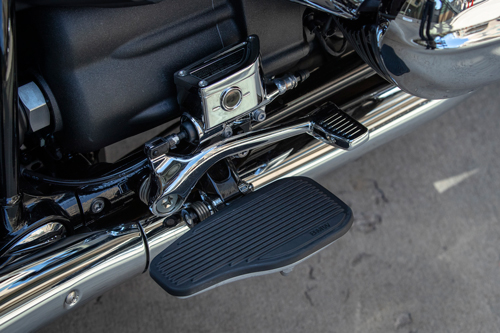 Switching to the Bagger reveals that despite being nearly identical in spec, it feels like a completely different motorcycle. The Bagger is almost 30 kilos lighter, and most of that weight loss is due to the absence of the top case, which on the TC incorporates lighting, speakers, and mounting brackets, all placed high and rearward. The Bagger feels nimbler and much more responsive than the TC, but its lower seat isn’t as comfortable, and it doesn’t offer the superb wind protection, since it lacks the lowers and wind deflectors.

My one big gripe with either bike was with the brake pedal; using it wedged my boot under the right cylinder, so much so that I often resorted to using only the front brake lever. The good news is that the bike has fully integrated ABS, so using either the brake lever or brake pedal individually will apply both brakes. And it brakes quite hard, despite its heft. 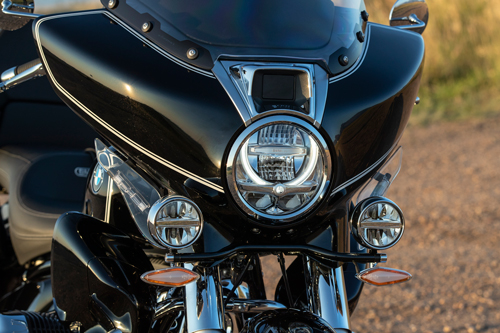 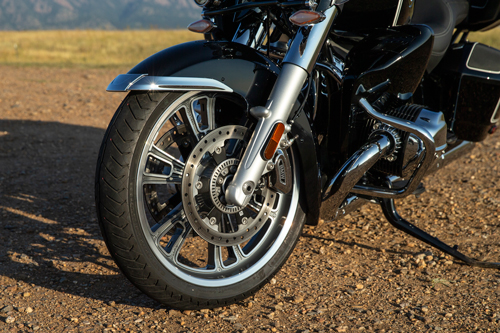 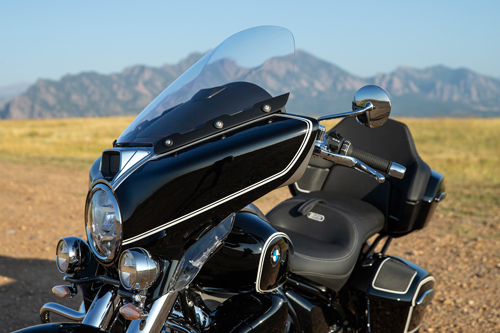 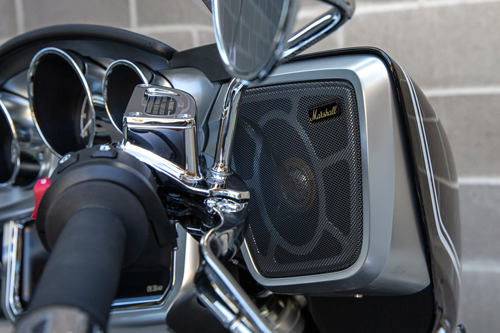 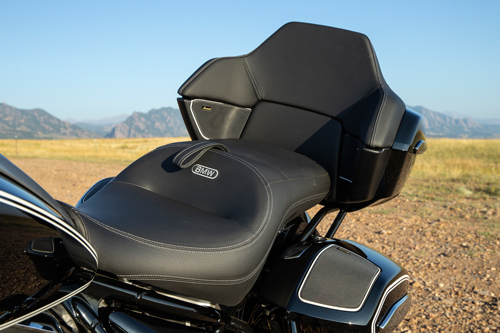 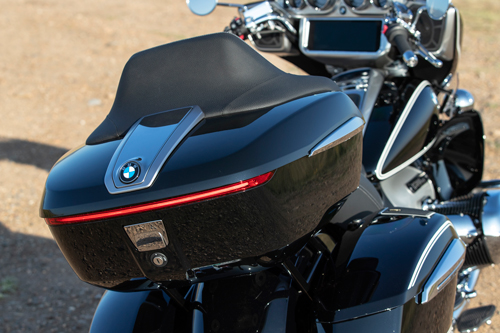 The first batch of BMW R18 touring cruisers will be dubbed “First Edition” models, and will come with special badging, chrome trim, and a “welcome box” which includes copper coloured tank emblems and screws, work gloves, screwdriver, “First Edition” cap and belt buckle, and a book about BMW’s 100-year history. The ideal setup for me would be the R18 Bagger with the taller windscreen and seat (both options), and the fairing lowers and deflectors. It would be a nimbler, lighter version of the TC, while offering the TC’s level of long-distance comfort.

So far, BMW has done exceptionally well in every category in which it offers a motorcycle. It now has its sights on the North American touring cruiser market, a category dominated by Harley-Davidson and Indian. I don’t think either American bike maker should be worried that their sales will take a hit from touring cruiser made in Germany, since buyers of those bikes are passionately loyal to bikes made on home turf. But the 2022 R18 Bagger and Transcontinental offer a unique blend of touring capability, individuality, and character that deserve a look.