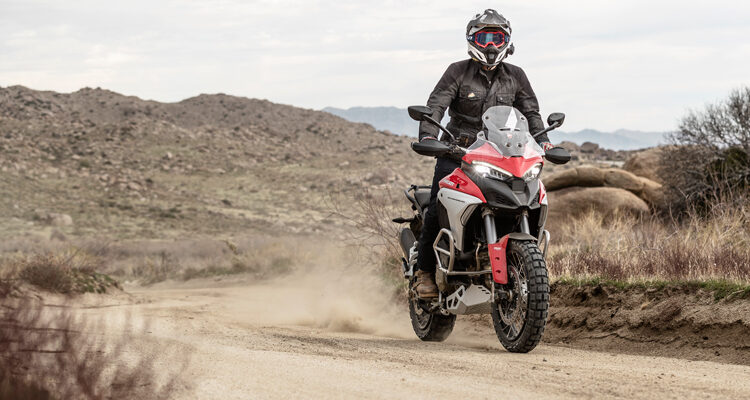 In many ways, the Ducati Multistrada set the bar for sport touring motorcycles when the first model rolled out of the Bologna factory back in 2003. And while the initial iteration divided many motorcyclists down the middle – you either loved the 80s sci-fi aesthetic, or you hated it – it was a game changer; whichever way you shake it. Designed as a hybrid blend of Supermoto and Sport Touring, the Multistrada was ready to tackle “many roads.” But for those that purchased the first offering, riding the Multistrada off road wasn’t always the best idea. With 17” cast wheels and superbike tires, the Multi didn’t bode well in the rough stuff.

Fast forward thirteen years to 2016, and the Multistrada is now available as a 1200 Enduro model, filling a space in the Italian motorcycle manufacturers lineup that had long been vacant. And while the Enduro provided riders with increased suspension travel, additional fuel capacity, a double-sided swingarm, as well as a 19” front wheel and spokes, it felt like an afterthought. Throw extra fuel and bigger wheels onto a platform known for its sport touring capabilities, and what you get is a motorcycle that feels exaggerated and overweight. But with their new V4 powerplant on the horizon, it seemed like Ducati had an opportunity to change the game once again in 2021.

Ducati has sold roughly 120,000 Multistrada motorcycles since 2003, a figure that equates to 20% of the company’s unit sales per year. So, a refresh of the model is an important part of keeping their machine moving. And when the Italian OEM surveyed its past, present, and future Multistrada owners, one thing was made clear, they needed to re-establish themselves as the pinnacle of performance and technology in the ADV segment.

At the heart of Ducati’s new Multistrada beats an 1158cc, 168-horsepower V4 Granturismo engine pulled from their Panigale V4 superbike. It utilizes a counter-rotating crankshaft which helps with wheelie control and rear wheel raise under breaking via mechanical aid versus an electronic one. The V4 powerplant is 1.2 kg lighter than the outgoing 1260 motor and is physically smaller (85mm shorter and 95mm shallower), which allowed Ducati engineers to place the motor 20mm higher in the chassis, allowing for additional ground clearance. Speaking of the chassis, Ducati opted for an aluminum monocoque unit in place of a trellis frame, which some may consider a major shift from tradition. A double-sided swingarm, 22 l fuel tank and the 19”/17” wheel setup all help the new Multistrada V4 to tip the scale at 215 kg dry.

So, while Ducati did manage to increase horsepower and torque, reduce physical engine size, and opt for a more adventure friendly wheel and tire combo, they didn’t manage to shed any weight. The Multistrada 1260 S weighed in at 235 kg wet, and if my math is correct, the V4 model should be roughly 243 kg with fluids and a full tank of fuel, albeit 1.8 l more than the 1260 S. But scale weight and how a bike feels beneath you are two different things, just ask anyone that rides a BMW GS with its horizontally opposed twin-cylinder motor. And besides, comparing the 1260 S and the new V4 models is like comparing apples to octane boost.

Three variations of the V4 will be available for 2021. A base model which features a smaller 5” TFT display, cast wheels and no BOSCH radar, the V4 S which is available with either cast or tubeless spoked wheels, a quick-shifter and radar, as well as a V4 Sport which comes standard with cast wheels and the carbon-fibre Akrapovic exhaust system. All three iterations are equipped with the 19” front wheel. The base model will see Brembo M4.32 calipers with 320mm discs up front, while the V4 S and V4 Sport will have Brembo Stylema calipers mated to 330mm discs. All three models will feature Marzocchi’s Skyhook semi-active electronic suspension, which is carried over from the 1260, offering 170 mm of travel in the front and 180 mm of travel in the rear.

Ducati reimagined the Multistrada in 2015, with the variable valve timing (VVT) variant of their Testastretta L-twin engine finding its way into the new 1260, 1260 S and 1260 Enduro models. Also found on that iteration was Ducati’s new suite of electronic rider aids, including IMU-assisted wheelie control, traction control and cornering ABS, among others. And with that, a new standard for technology in the ADV segment had been set.

Six years on, and Ducati hopes to raise the bar yet again with their 2021 Multistrada V4. Gone is the trellis frame, desmodromic valves, single-sided swingarm and thundering L-twin engine. What remains is the bird-of-prey aesthetic that Ducati isn’t afraid to embrace, along with two additional cylinders, a cast aluminum swingarm on both sides of the rear wheel, and the integration of technological improvements that, like the introduction of the first Multistrada, will likely split people into two camps – those for, and those against. Outfitted with front and rear facing radar developed in partnership with BOSCH, the Multi now offers adaptive cruise control, blind spot monitoring and lane change assistance. The radar system, which looks like small black matchbox adorned to the beak and tail of the motorbike, pings objects and then measures that distance in terms of time. This allows riders to set their cruise control at a certain speed and then adjust the distance they’d like to be from vehicles ahead of them when the radar detects an obstacle. So, in essence… Set your speed, adjust your following distance, and then let the adaptive cruise control do the rest. Additionally, lane departure and overtake are operated with help from the BOSCH radar system. Hit your turn signal, lean into the adjacent lane and the cruise control will increase your speed by a ramp rate of roughly 40%, allowing you to overtake without having to touch the throttle.

Additional tech adorned on the new Ducati is a 5.6in TFT display which integrates multiple apps including Ducati Connect, allowing riders to send a receive phone calls and listen to music on their Cardo or SENA headset, the DucatiLink app which allows riders to track and share their rides, as well as turn-by-turn GPS navigation and mapping powered by Sygic.

With the goal of leading the ADV segment in terms of technology and performance, Ducati started at the center and worked their way out. The new 90-degree V4 with its counterrotating crankshaft produces nearly 170-horsepower at 10,500 RPM and 92 ft-lbs of torque at 8,750 RPM. Ample power for an adventure bike. There are four riding modes, Sport, Touring, Urban and Enduro, the latter of which cuts the power to a manageable 100-horsepower and allows you to disable the ABS on the rear wheel (front wheel still retains ABS due to European regulations). From there, Ducati looked at what their customers were using the Multistrada for and found that many wanted a bike that was more of an all-around adventure machine. Enter the 19-in front wheel.

Offering a narrower footprint, the 19-in wheel proved a perfect pairing with the Skyhook suspension, providing ample feel on the pavement and allowing the Multi to overcome obstacles that would have been rather difficult with the former 17-in wheel setup. In the dirt, the V4 motor chugged along happily in second and third gear, with limited wheel spin and plenty of power on tap. The counterrotating crankshaft was incorporated to help keep the front wheel planted on the pavement, however when riding off road that extra inertia made the front end feel a bit heavy when it shouldn’t have, especially in sand. The wide bars and narrow tank provided a comfortable riding position when standing on the pegs, producing little to no pitch forward for someone my size (5’9”) or even taller.

The gearbox is a typical Ducati delight, with lightning fast up and down shifts thanks to the quick shifter that comes standard. With a 24.5° rake angle, the V4 is arguably more sport bike than ADV (for reference, KTM’s Super Adventure S measures in at 26°), but you wouldn’t notice when venturing off the beaten path thanks to a sharp turn in feel provided by the larger front wheel and overall geometry of the bike. Outfitted with the optional Pirelli Scorpion Rally tires, the V4 felt confident conquering hard packed dirt and gravel. But when the sand showed up again, the front end felt heavy and rear traction declined noticeably. Even after adjusting the suspension to increase pre-load up front in an effort to lighten the front-end feel and increase traction, the V4 just wasn’t at home in the sandy washes that we encountered.

The Ducati Traction Control (DTC) has two settings in Enduro Mode, neither of which are favourable for anyone familiar with off road or adventure riding. Even in its lowest setting, “Enduro 1” the system overreacts to a loss of traction, and when descending a steep hill, does not provide the stopping power you come to expect from a bike without an electronic aid. Luckily, the DTC can be disabled, allowing you to lock up the rear wheel in both sweeping turns and steep descents. For riders new to ADV, I suspect the “Enduro 1” setting would help aid in oversteer and total loss of traction, though. Is the Multistrada V4 the best off-road motorcycle in the ADV segment? No. But can it conquer nearly all the things its riders will likely throw at it? Most definitely.

If I am being honest, the twisty mountain roads are where the Multistrada V4 truly shines. Where it feels most at home. The dash and riding position make you feel like you’re seated in fighter jet. The adjustable windscreen, which now requires only one finger to operate, reduces wind noise and vibration so that all you hear is the scream of the V4 Grantourismo motor beneath you. The V4 feels planted, daring you to push it a little deeper into a corner. With the wheelie and traction control enabled, throttle response feels more like you’re being pulled by a giant cable than thrust through space by the back wheel. Power comes on immediately and runs through all the gears, seeming endless in its endeavour to tip the needle all the way to the right. Low end torque allows for third-gear power wheelies and yet the bike feels almost muted when riding about town at a leisurely pace. Some might groan at the loss of desmodromic valves, the trellis frame of the L-twin motor, but underneath all this new technology is the same beating red heart of a Ducati, ready to give you the feels whenever you ask for them.

I’ve had the pleasure of riding every example of Multistrada, from the early 2000s Sci-Fi iteration to the game changing 1200 model, the nimble 950 to the last of the L-twins, the 1260. All along the way I’ve said the same thing, ‘what more could you want from a motorcycle?’ And with the changes made to the new Multistrada V4, Ducati has created, once again, a bike that might not be the best at any individual thing, but damn good at just about everything. So, where does Ducati go from here? We were told that an V4 Enduro might be in the works if the demand called for it, but does this bike really need a 21-in front wheel? Does it need more fuel or taller suspension? Does it need to make more power? I suppose that’s a question you’ll have to answer for yourself.