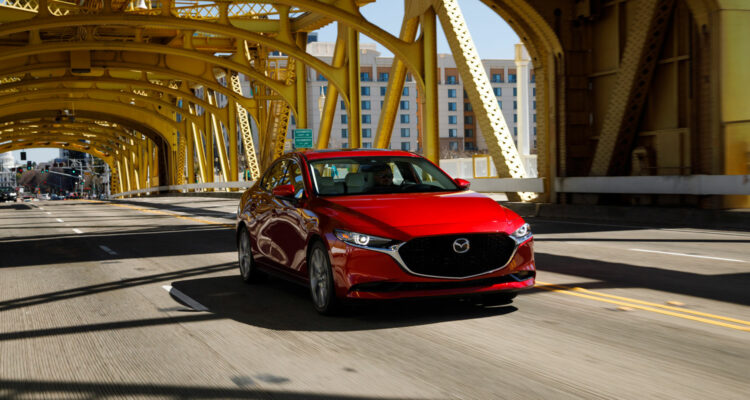 LAKE TAHOE, Calif. — There is, somewhere beneath our feet, the first hole of the Resort at Squaw Creek golf course. We’re not here for golf, however: Today, the first hole is actually an all-wheel-drive demonstration track, with a few inches of ice atop several metres of snow.

It was the answer to my original question: “How do they plan to demonstrate all-wheel drive when they’re flying us to Sacramento in spring?”

We drove the 2019 Mazda3 through the fields of Sacramento Valley, past trees starting to bud and flowers in bloom until we arrived in the mountains and ended our drive at Tahoe, where the snow was so deep, the cabins of snow plows poked above the snow like turtles in a lake coming up for air.

So we’re in a car, on a bed of snow four metres deep, trying to make sense of Mazda’s i-Active all-wheel drive, and how it will apply to compact-car customers seeking a bit more winter-driving control.

The biggest surprise is how much fun the system allows. We hit a left-hand curve and I punch the throttle, expecting a slight kick outward of the rear and then the flashing light of the stability control system kicking in to shut down the fun. It doesn’t. The rear kicks out and the car reads my counter-steer as the correct fix and says to itself “He’s got this. Relax.” As well, the car shifted torque to the rear, giving it an almost rear-drive feel.

The next test was in a sedan with winter tires and an engineer riding shotgun with a laptop at the ready to shut down the G-Vectoring Control. GVC kills engine power an imperceptible amount when you turn the steering wheel, enough to shift weight to the front tires just a bit to improve steering response, and brakes the outside wheel just a bit when you start to unwind the steering wheel to improve the car’s reaction to exiting the turn.

Turning off the GVC — something only the engineer could do with his particular blend of computer voodoo — actually made quite a difference in how the car responded. With it off, the back end of the car kicked out noticeably. When it was on, the back end kicked out barely at all.

We’re here to experience the all-wheel drive, but for many of us, it’s our first drive of the new Mazda3, and it’s a car packed with surprises. 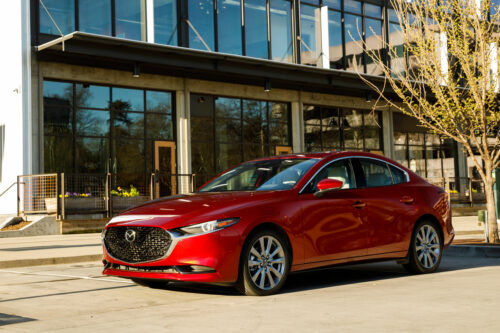 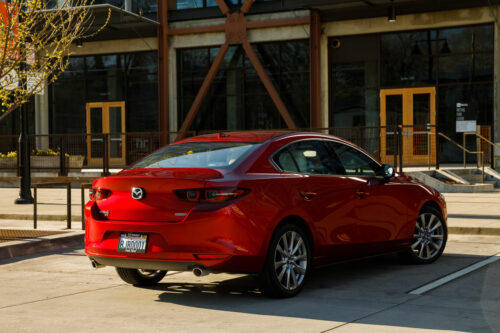 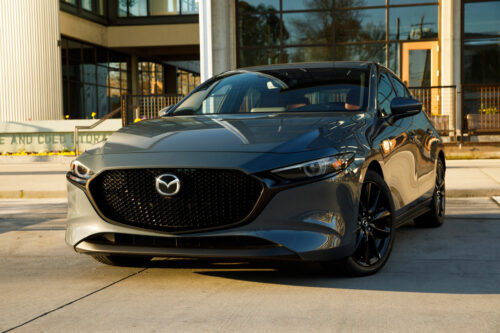 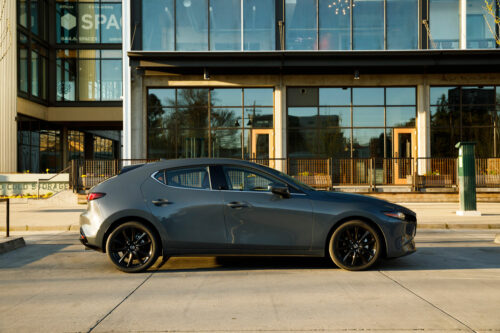 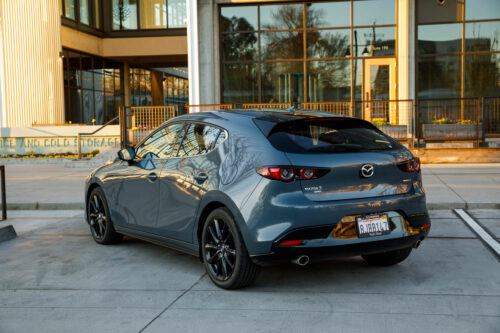 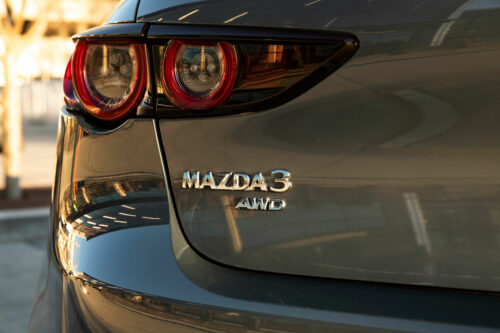 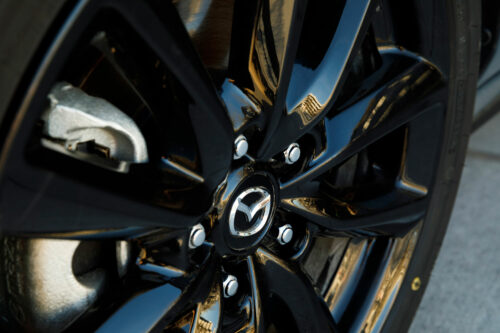 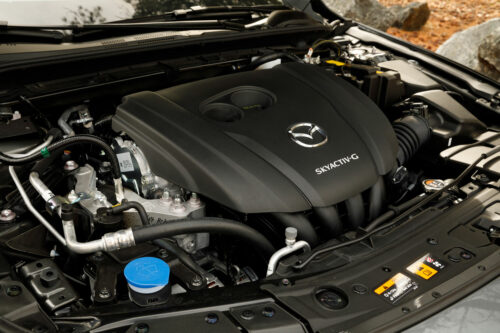 Yes, you read that right. Here’s the best part: we didn’t miss the multi-link design in the slightest.

“We didn’t do it to make the car worse,” vehicle dynamics engineering manager Dave Coleman said over dinner.

Here’s the thinking behind Mazda’s decision on the rear suspension: by moving to a torsion-beam design, engineers reduced the number of rubber bushings from 14 to two. That, Coleman said, gives them much more control over how the suspension reacts.

Coleman said the typical weakness with torsion-beam suspensions is that as side loads increase — such as when in a corner — the beam deflects and introduces what he termed “compliance steering” in the rear wheels, where the wheels change direction in reaction to how the torsion beam is bending. By moving to a dogbone-shaped design, and with added creases for structural rigidity, the Mazda3 torsion beam is 73 per cent stiffer than the beam in the CX3 crossover.

“There’s no deflection of the rear wheel,” he said. “As the body rolls, the tire keeps pointing where you want it to.”

The whole suspension also benefits from Mazda’s work studying how vehicle occupants are disturbed by bumps and dips: typically, when a car hits a bump, an occupant’s head moves forward slightly, as the resistance of the bump serves as a form of braking, and then moves upward in reaction to the bump. “What we’re doing is trying to clean this up, and make it just one motion.”

Coleman said they traced this complex movement to the upper bushing in the front suspension’s control arms, which previously was constructed like two rubber sleeves that, in addition to allowing for rotation also allowed for vertical sliding of the bushing pieces. The new upper bushing is now built more like a ball joint, where the inner sleeve has a bulge that mates with matching concave surface on the inner part of the outer bushing. This locks the bushing into allowing only rotational movement. Such also allows for a much stiffer bushing at the lower part of the control arm. 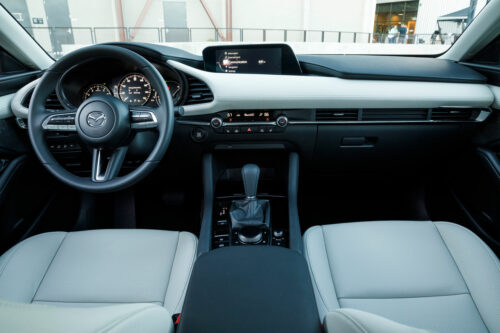 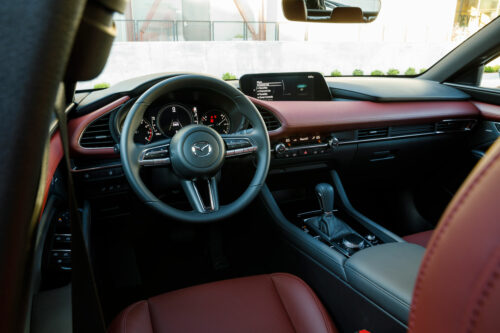 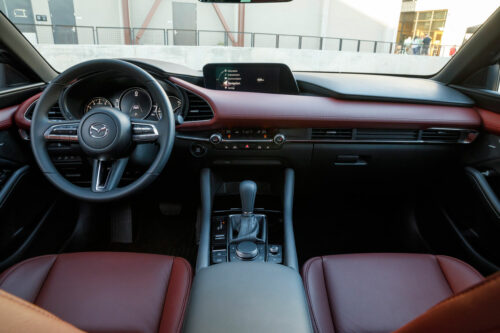 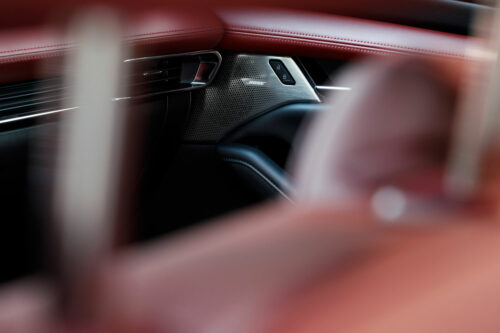 It all translates into an economical car that handles with the aplomb of a sports car. We tossed it effortlessly through the seemingly endless collection of curves and switchbacks along California’s Golden Chain Highway. Not for a second did the thought occur it needed a different rear suspension.

The other surprise was the Bose audio system available on the top-end GT model. It is, arguably, the finest-sounding system ever installed in an economy car. The soundstage develops across the windshield, with instruments and voices located where the audio engineer intended when the music was first produced. On Queen’s Bicycle Race, where Freddie’s voice appears in multiple locations on the soundstage, you can actually make out where it is.

Moving the bass speakers from the door to the front cowl, located between the door hinge and wheel well, allows Bose to provide a full range of bass. In the previous Mazda3, the lower end of the bass spectrum had to be rolled back to prevent vibrations in the door panel.