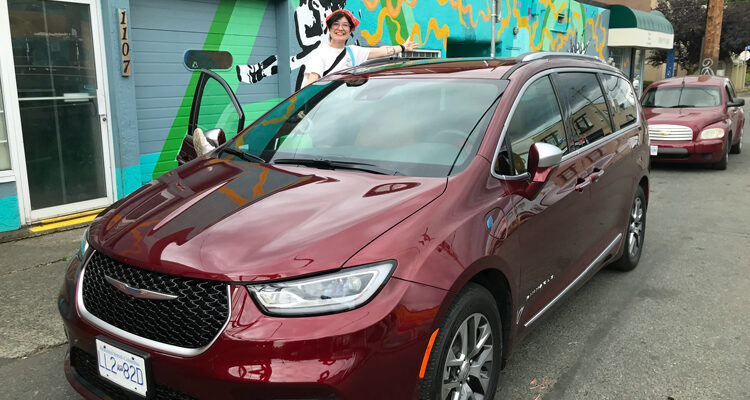 It’s really more like noon, Day 1: We’re on the return ferry from Vancouver, the Chrysler Pacific Pinnacle Hybrid safely stowed below on Deck 3. Technically so far, our cross-country journey has been 33km. But that doesn’t mean we haven’t been busy or that the Pacifica hasn’t been well used.

Six hours on Saturday were spent moving furniture to other homes across Victoria: a double bed with box spring, and three mattresses; a seven-foot credenza which felt like it was made of lead beneath the wooden coating; futon; couch; table and chairs; and miscellaneous stuff.

There were eight trips, two of which were to the Value Village which accepts donations out the back. Each trip entailed some disassembly, carting furniture awkwardly down narrow stairways and around corners, loading into the van, driving, then unloading and praying that heavy furniture would fit up narrow stairways, into elevators, bedrooms and cupboards. It was enervating.

Doesn’t it have three rows of seats? Yes, but only if you want.

Stow n’ Go seating magically tucks itself into the floor of the van, creating space. Wow, you must be thinking, we finally live in a perfect world — but for that whole continent-long wildfire situation. Good point.

We do need to move faster towards electrification — most of the big manufacturers have made commitments to complete change within a five to ten years — and a hybrid vehicle is a start.

But the Pacifica hybrid’s second-row seats don’t fold in and disappear into the floor because the battery’s there. Instead, the seats can be removed with a good tug on a rope that releases their anchoring mechanism. Then you pop them out and, if you’re very strong, carry them out of the van to be stored, say, in your daughter’s building’s bike lockup.

If you’re not strong, you get your daughter’s boyfriend to help. I’m not strong.

The boyfriend was a great help on Saturday and yesterday, Sunday. That was when, having unloaded all the furniture on Saturday, we reinstalled the second-row seats and began loading the Pacifica with the back row still cached.

Kudos to Justine for rationalizing five years’ worth of objects. The apartment was emptied and given a deep cleaning; the van was fully packed but not but dangerously so. I could still see out the rear-view mirror.

Last evening, I returned to my other daughter’s home across town, where I’ve been staying the past two nights. (Yes, we’ve had both our kids living 5000km from home for years. Is there a message?) Olivia stays in a beautiful neighbourhood, nestled on the ocean. Indeed, her street is appropriately called Beach Drive.

This morning, Day 1 or 3 — you decide — I rose and jumped into the Pacific, not 150m from my bedroom, as a sort of baptism of this journey.

Who knew baptisms were so frigid? The heatwave is over on the mainland.

I hugged Olivia goodbye, ignored the lump in my throat that goodbyes, and drove back to Justine’s for a couple of last-minute loads: bicycle, speakers, a coffeemaker and day-bags.

And now here we are, on the boat again!