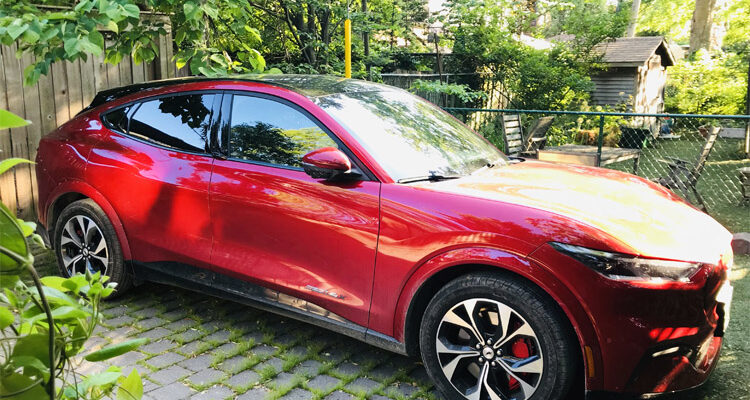 AJAC EcoMonth and the Mach-E — The Conclusion

Have you ever competed against professional athletes? I used to run marathons, many of which were functionally two half-marathons on one route. Running is the only support where any schlubb with a credit card can compete with the best. Sluggishly slow, I was always gobsmacked by the sheer, unadorned beauty of the elite runners already lapping me before the 16km (32km) marker. More like winged pads, their feet were almost silent — they appeared to float effortlessly — and their breathing was close-lipped calm. Sheer awe: It was like being in the presence of an advanced species.

Want a thrilling shortcut to a similar feeling of awe? Picture the crack hit that comes with piloting an electric vehicle (EV) like the Ford Mustang Mach-E and, with a tap of a toe, quietly ‘appearing’ ahead a line of cars, trucks and buses at the next traffic light. Eschewing the deafening bellow of a combustion engine charging ahead, the EV invites other drivers to admire you as an elite, not some belligerent sonofagun lacking adequate muffling.

Of course, the feeling is amplified by the elegant appearance of the Mach-E. It looks fast just standing still. In profile, it purports the dimensions of an SUV but maintains the visual fluidity of a sporty power sedan. Few accoutrements interrupt the visual motion. Handles are replaced by minute buttons that sense your presence. With the wing mirrors folded in, the Mach-E presents the smooth aerodynamic surface of a dolphin. Like sexy undergarments, red calipers peek through the spokes of the fattened 19-inch wheels (18-inch in the base trim).

The Mach-E is competing in the luxury performance EV category. Ford needs to entice you away from Tesla, Volvo, Audi, BMW and many tinkering specialists beyond the big names. (When the electric-curious public causes the imminent tipping point, the industry is well prepared.) So inside, the Mach-E is exquisite. That said, please forgive the purple gushing in the next paragraph.

The stitching in the soft but just-firm-enough seat caresses the fingertips. The panoramic fixed-glass roof pretends to bring the outside in, maintaining the speedy silence which you’re invited to disrupt with a magnificent Bang & Olufsen sound system. (If you wondered in your youth whether to pursue in acoustic engineering, is there a better sign from the heavens than the surname BANG!?) The speakers blend into the inner walls’ surfaces, mimicking but reinterpreting the smoothness of exterior. Close your eyes and listen to your favourite track (if you’re not driving); the music is almost three-dimensional.

Sorry, did we just cause a mess? Back to the athlete analogy. Please be patient — it’s not flawless.

EVs are like the elite runners of the automotive world. (Indeed, EVs are more like an advanced species than elite runners.) But without the wider running community’s infrastructure and support, elite runners are all but impotent. You need races in locations throughout the world, staffed by devotees; the cooperation of civil servants to block roads, redirect traffic, etc. When we work together, everyone benefits and elites sparkle. It’s a symbiosis.

Likewise, without roads and fueling stations, a car’s not much use. Such infrastructure is just as vital for EVs. This June is EcoMonth in the Canadian automotive community and members of the driving community are considering the wider ecosystems around eco-conscious vehicles. Some governments are slow to build but the major automobile manufacturers understand that.

Back in January, GM announced its grand plans to go electric, delivering 30 new EVs by 2025 and spending $25 billion on EV technologies. Later the same month, Volkswagen announced it will have launched 70 EVs by 2030.

Just last month, at the public announcement of the all-electric Ford F-150 Lightning, Kumar Galhotra (Ford President Americas & International Markets Group) announced that Ford’s investing US $22 billion in electrification globally through 2025 “providing an ecosystem of customer services to assure the transition of customers from gas to electric.”

When the Mach-E was launched in 2019, Ford touted “built-in charging solutions that route customers to nearby charging stations.” And that’s where infrastructure and community extends beyond the physical world, into the digital. We may think of our phones and other communications devices as our own private toys, or cyber extensions of ourselves. But really connectivity is also part of a wider community. This applies in most modern cars including the Mach-E. You can do a heap of operations from your phone via the FordPass app. It connects your phone to the in-vehicle screen and a good deal of the digital world through the Google and Apple stores. (Yes, only iPhones and Androids need apply.) Presto, you’re a mobile home office!

You can even make your phone the ‘key’ and not keep the fob on your person. And perish the thought but if you need roadside assistance that too is reachable through the app. For those chronic millennials whose phones run out of power, no need to dive into the foetal position! There’s a backup code on the centre screen that still lets you start and drive.

It’s been an interesting second week of EcoMonth. Today is the first day of the gradual reopening of Ontario and I plan to celebrate it by going for a long slow run before returning the Mustang Mach-E tester.