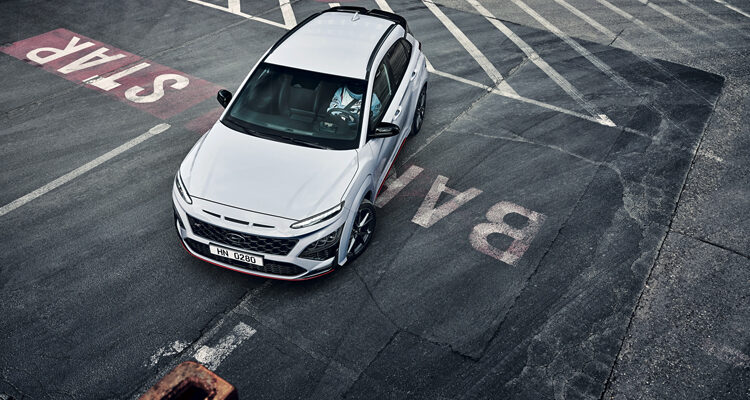 The above sentence sums up the brand’s first take on the so-called “hot SUV” segment nicely, the vehicle joining the Veloster as a member of the adrenaline-inducing, track-ready N team — not to be confused with the N Line portfolio that is enhanced largely from an aesthetic rather than a performance standpoint.

Though Schemera’s statement taken out of context may lead you to believe this hopped-up crossover might not be a quick one, the specs indicate otherwise. A 2.0-litre turbocharged GDI four-cylinder engine under the hood cranks out a healthy 276 horsepower and 289 lb-ft of torque, and is mated to an eight-speed wet-type dual clutch transmission. No, it’s not covered in water but the setup utilizes oil for improved heat dissipation and lubrication.

The gearbox works together with the motor to offer N Grin Shift, similar to the feature found on the Veloster N. Once activated, the powertrain is temporarily over-boosted — think overclocking a PC — maximizing output for a short duration, to the tune of an additional temporary 10 horsepower. A cool-down period follows before it may be used again.

Throw on launch control, and the vehicle rockets from 0 to 100 km/h in just 5.5 seconds, and can reach a top speed of 240 km/h. As the road turns windy, N Corner Carving Differential comes in handy: an electronic limited slip differential is capable of directing precise amounts of torque to either of the front drive wheels to maintain grip, which along with the rears are shod in sticky rubber.

Questioned as to why alternative drivetrain layouts weren’t being made an option, the executive panel indicated the Kona N is meant as an affordable true daily driver. Snow ready when a set of winter tires are thrown on, minus the expense and weight of lugging around an all-wheel drive system year-round.

As all N models are, customization is king here, whether we’re talking about the five drive modes (Eco, Normal, Sport, N and Custom), steering feel or even the tone and volume of the variable exhaust system.

The analogy of the N Grin Shift setting to boosting a CPU would not be the only computer reference made during the media presentation. Perhaps speaking the language of the younger target demographic, a large emphasis has been placed on some of the cool in-cabin tech.

Firing up the ignition reveals a fully digital instrument cluster, complemented by an exclusive racing head-up display that Hyundai says adds a “game-like dimension to every driving experience under N or Sport drive modes.” The 10-inch infotainment touchscreen shows all the vital stats including lap times and even a track map to pinpoint the SUV’s location, similar to what’s seen on the monitor while playing an arcade racer.

If, somehow, none of what’s been mentioned so far has gotten your blood pumping, the exterior should do the trick. Kicking the already sleek Kona up several notches, Simon Loasby, head of Hyundai Style Group, pointed out the design isn’t simply about beauty, but also functionality. The styling supports three key pillars: cooling, weight reduction and aerodynamics.

The proof is in the pudding — the front bumper features huge military aircraft-inspired intakes; the big 19-inch wheels are made from lightweight forged aluminum; and the double-wing roof spoiler, housing a racy triangular brake light, helps direct airflow efficiently. Body-colour wheel arches and aero pieces give a ground-hugging appearance and finally, a special coat of pale Sonic Blue paint is available providing a new signature look.

More details to come closer to the TBD launch date.