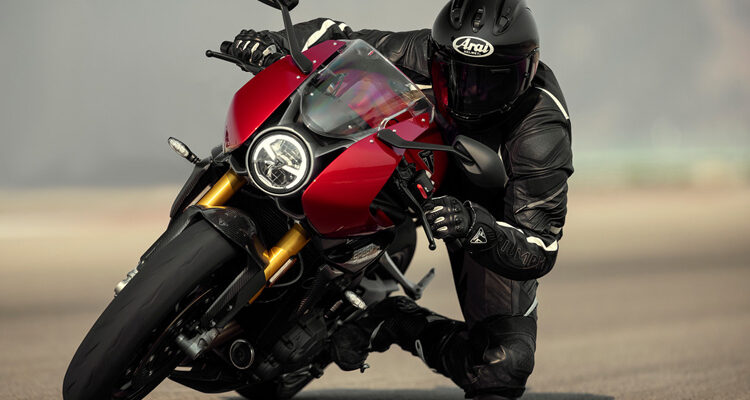 If you’ve ever wondered what the love-child of a Triumph Thruxton R and Speed Triple 1200RS would look like, you can now let your imagination rest: the Triumph Speed Triple RR has debuted.

Built on the recently updated 2021 Speed Triple 1200 RS’ streetfighter platform, the 1200 RR version is a more aggressive, retro-inspired take that, in my eyes, contends with the MV Agusta Superveloce for sexiest street bike honours.

The packaging includes a well-executed move to a single round headlight design that protrudes ever-so-elegantly from the bisected front fairing. A belly-pan is also fitted to complete the “bikini fairing” look. Carbon fibre and billet accents can be found throughout to deliver some high-end finishing to an extremely attractive overall design.

More than just a pretty face, the RR also packs a bevy of upgrades over its RS stablemate. First and foremost, the suspension is a semi-active, electronically adjustable set-up from Öhlins, dubbed Smart EC 2.0. Essentially, Öhlins most sophisticated kit, these suspenders can be tinkered with on-the-fly and will read and adapt to road (and track) conditions.

Braking is tackled by Brembo’s Stylema calipers, which are a carryover from the RS. They are governed by a six-axis IMU to enable lean-angle sensitivity for the ABS and feature an adjustable lever for the front 320mm discs. That IMU also oversees traction control, wheelie control and Rider Mode intervention as well, of which there are five (Rain, Road, Sport, Track and Rider Custom).

Rider ergonomics have shifted to a more aggressive triangle. The bars have been swapped for clip-ons and those sit 135mm lower and 50mm further forward, to promote a full racer’s tuck. The rear-set footpegs also shift a bit aft, as well.

Since it was developed alongside the Speed Triple 1200RS, the RR is also underpinned by the same twin-spar, aluminum frame. The 1,160cc, liquid-cooled inline triple is also unchanged, continuing to develop 177 horsepower and 92 foot-pounds of torque in a package that tips scales at 199kgs, fuelled and ready.

All of the tech and sexiness of the Triumph Speed Triple 1200 RR does come at price, though. Regardless of colour choice (Crystal White or Hopper Red), it will cost $23,250 to put one between your legs. For those keeping score, that’s $2,750 more than the RS version and $1,755 more expensive than the beastly (and similarly equipped) Aprilia Tuono V4 Factory. If you need some justification though, it is nearly $10k cheaper than the MV Agusta Superveloce.