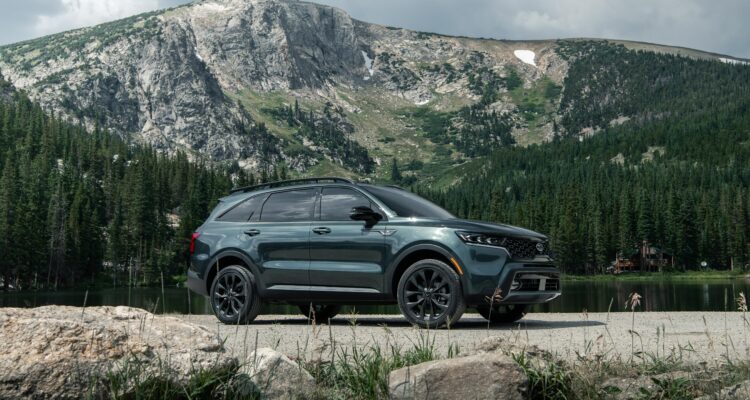 2021 Kia Sorento To Get All Four-Cylinder Power

The Kia Sorento is a pioneer in many ways for the South Korean manufacturer. It was the first Kia to enter the ultra-competitive mid-size SUV segment back in 2002, the second-generation vehicle was the first Kia to be built in an all-new plant in West Point, GA and it remains one of the highest-selling Kias of all-time, with over 1.5 million sold worldwide. It’s a very important vehicle for Kia, and now there’s a new one and it has to be said that it looks poised to bring the Sorento to new heights.

The big news with the 2021 Sorento is that there will be two distinct versions of it once it reaches dealers in the fourth quarter of 2020: the more traditional SX, EX, EX+, LX+ and LX Premium trims as well as an all-new X-Line trim. Later in 2021, meanwhile, a Hybrid and PHEV version will also be available. The Hybrid will be available in the US at launch later this year, but it’s a FWD model and Kia wanted all Canadian-market Sorentos to be AWD at launch. So, we have to wait until the Hybrid AWD/PHEV AWD models are ready for market, both in Canada and the US.

The X-Line features add pretty much what you’d expect with a name like “X-Line”: higher ride height and some more aggressive styling touches in the form of blacked-out grille, more aggressive bumpers, beefier roof rack and 20” wheels – that’s a first for the Sorento.

It looks properly imposing, does the X-Line and you can see that it has the likes of the Jeep Grand Cherokee Trailhawk and Toyota RAV4 Trail in its sights; they haven’t yet announced pricing, but they did say that the Grand Cherokee would come it at a higher price point than the X-Line.

Which is interesting because the X-Line comes well-equipped with leather seating, real wood inserts, turbo motor good for 281 horsepower and 311 pound-feet of torque and all the heavy-duty adds we mentioned earlier. It’s the least-expensive way to get the turbo motor, which joins a naturally-aspirated 2.5-litre four-cylinder good for 191 hp and 182 lb-ft of torque — there is no longer a V6 option for the Sorento. The US version of the Hybrid, meanwhile, is good for 227 hp so it will be interesting to see if the Hybrid AWD model gets similar spec.

Both gas engines come paired with 8-speed automatics, with the turbo motor getting a dual-clutch example. All Sorentos also get four drive modes to choose from: snow, comfort, sport, smart.

Other exterior figures that are shared across the board include a shark-fin theme shared with the Telluride that’s most obviously seen on the bottom leading corner of the rear side windows. It’s repeated more subtly on the rear spoiler, at the corner of the taillamps, on the side skirts astride the rear wheels and on the rear bumpers. According to Kia, the goal was a more chiseled look overall. Indeed, that has been achieved as this iteration of the Sorento looks much crisper and less slab-sided than the previous version.

Inside, as is the case with so many SUVs and CUVs these days – well, as is the case with many cars, actually – the theme is one of “digitize all the things”. The gauge cluster is available as a 12.3” customizable display with Kia’s Blind View Monitor tech, which turns the left- or right-hand side of the gauge cluster into a blind spot camera depending on which turn signal the driver has activated. The main infotainment display, meanwhile, measures 10.25” and Apple CarPlay and Android Auto come as standard. There are also up to eight USB ports – two up front, four in the second row, two in the third row – depending on trim. According to Kia, that’s a class-leading figure.

Speaking of measurements: the new Sorento is a little larger than the old model, meaning a bit more room inside to the tune of and additional 92 mm of second-row legroom (for 2021, all Sorentos get three-row seating as the two-row option is no longer available), a tiny bit more third-row headroom and about 60 more mm of rear cargo floor space.

Safety features run the gamut from more traditional stuff like rear cross-traffic alert, blind spot monitor and lane-keep assist, to more advanced aids such as rear-seat reminder, the ability for the Sorento to watch for oncoming traffic as you pull out of a parallel spot and the ability for it to warn you of any impending dangers before you open your door.

No pricing has been announced; we’ll be seeing more information in that vein as the 2021 Sorento nears production later this year.