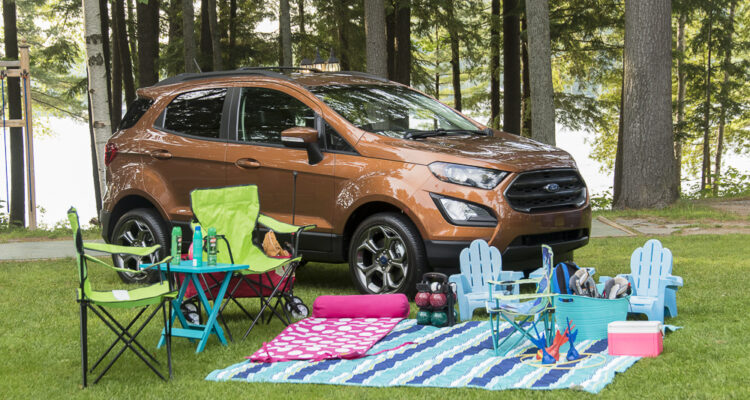 Utility vehicles are taking the market by storm and this is something most manufacturers have come to understand and embraced. Ford has had no problem following the trend considering its extended lineup of utility vehicles. But for 2018, the manufacturer will add a little something new at both ends of the SUV size spectrum. We got to discover the all-new 2018 Ford Expedition and EcoSport in Muskoka, at Ford’s Back to Basics event.

When Ford combines space, utility and luxury, we get the Expedition. The blue-badged behemoth has been updated for 2018 with what Ford qualifies as the most capable generation yet. This time, the model receives a bit of an F-150 treatment including a high-strength aluminium body, a ten-speed automatic transmission as well as the trailer backup assist system.

The SUV shed 300 lb in the redesign process and has been injected with numerous entertainment and safety technologies. New to this year, it will offer wireless charging as well as the GM-inspired WiFi hotspot, teamed with SYNC Connect and the FordPass mobile application that allows the owner to unlock the doors, start the engine, and even locate the vehicle.

Need a boost? There are six – yes, six – USB ports and a 110-volt outlet, which should be enough to keep everyone busy and connected on long road trips. It can sit up to eight people on three row of seats and despite having only four doors, the second row can be moved to allow access at the back.  The advanced cargo manager with a shelving system turns the cargo area into an organized cargo area.

The 2018 Expedition will be offered with only one engine, the 3.5L EcoBoost with intelligent 4WD and Ford’s pretty efficient ten-speed transmission, as we have discovered back in March. The maker even promises actual off-roading capabilities as well as segment-rivaling towing capacity.

It was first introduced in South America, Brazil to be specific and it has since been around the world. Canada had yet to be scratched off its list and it finally will. The Ford EcoSport will land on this side of the pond early next year.

It is undeniably adorable. If you ever wondered what a compact version of the Escape would look like, wonder no more, the EcoSport is it. Ford has (thankfully) upgraded the design before bringing their smallest SUV model here, but it isn’t a complete rehaul – the company wanted the model out here asap and decided to stick with the current, four-year-old second generation.

It will receive a few new features, including a completely different console with a tablet-looking, floating touchscreen, using Sync3. It will be offered in four different trim levels and will be powered either by the same 1.0L, three-cylinder EcoBoost engine offered in the Focus, or a 2.0L direct injection option.

For optimum versatility, the EcoSport’s rear seats can fold flat to make good use of the cargo space. The hatch opens on hinges like a barn door, rather than the usual flip up system, an interesting – not to say weird – choice of design. We have been assured that this type of door barely requires more space than the usual hatch and that considering the size of the vehicle, it was to avoid people having to access the cargo area having to bend down.

The 2018 Expedition will be coming towards the end of the year and the EcoSport can be expected in the showrooms early in 2018.