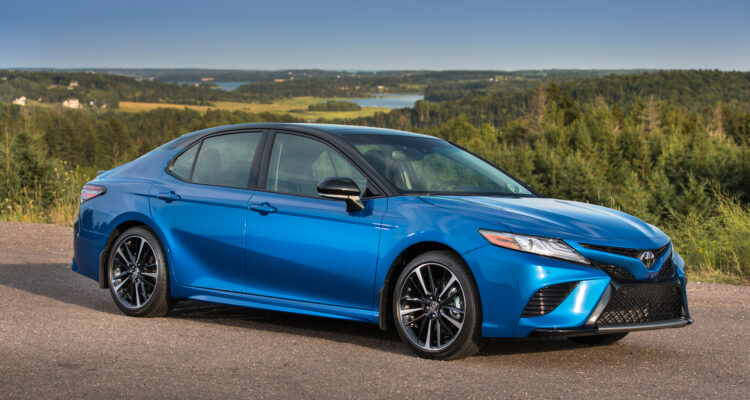 The man’s face as I pulled into the parking spot next to him at the grocery store had me wondering what I had done wrong.

It was a look of incredulity.

But when I got out and looked at my parking job, I knew that wasn’t the issue.

Well, I was driving the redesigned 2018 Toyota Camry, that’s what.

He went on to do a walk-around of the entire vehicle, nodding approvingly along the way.

It’s hard to disagree with his positive assessment. 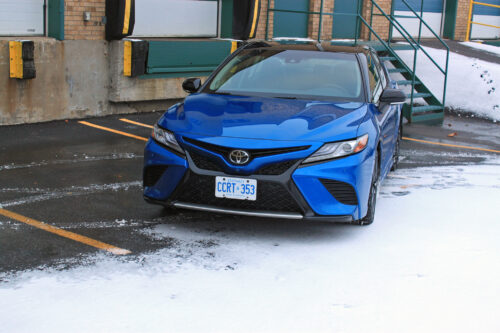 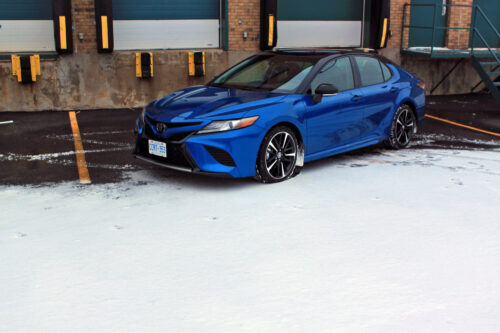 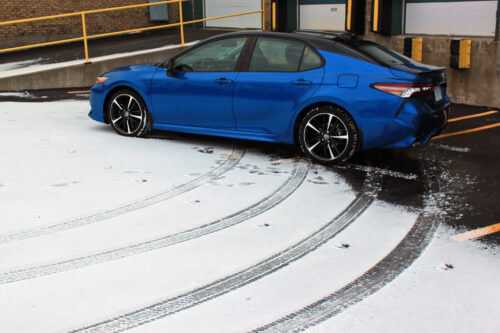 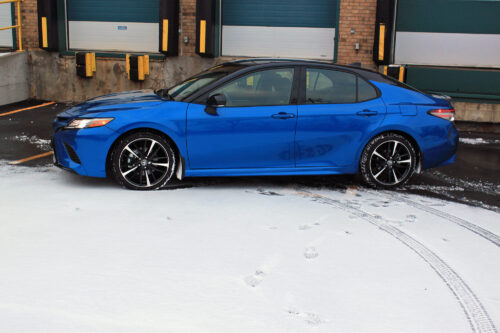 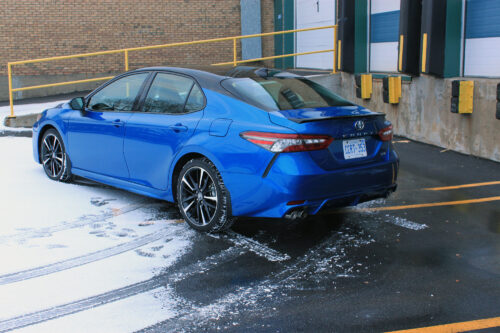 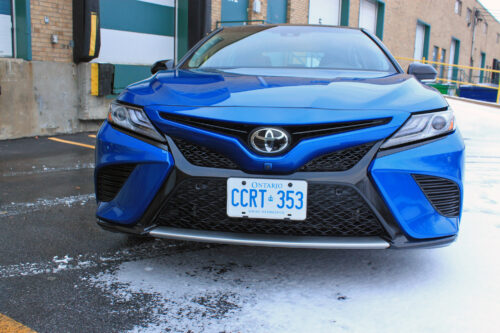 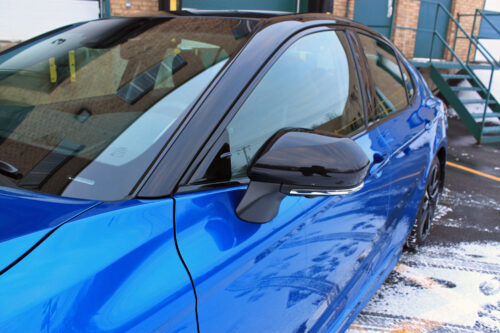 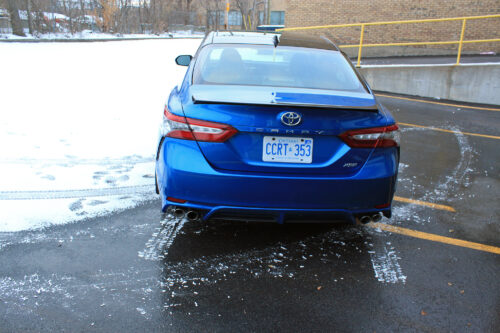 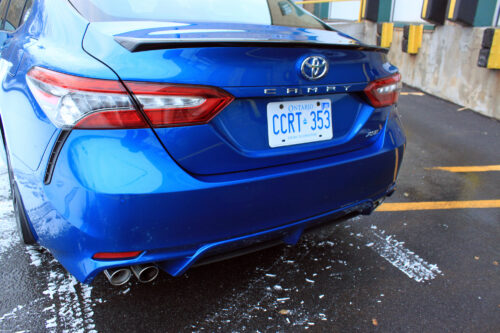 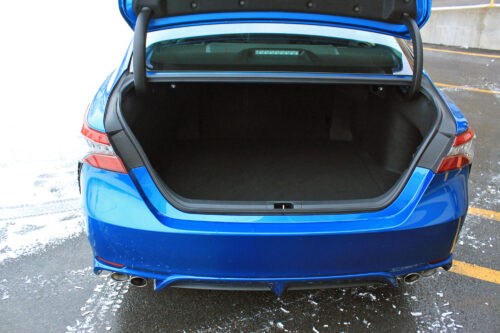 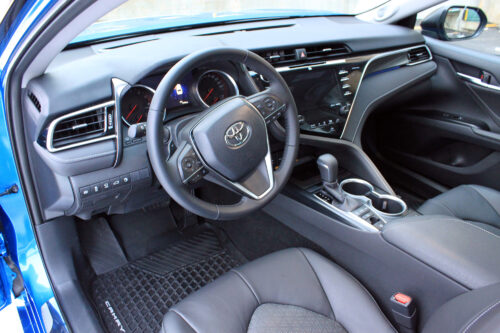 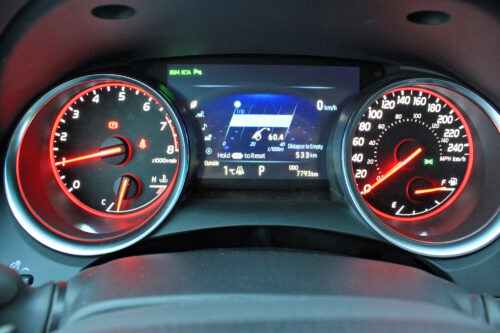 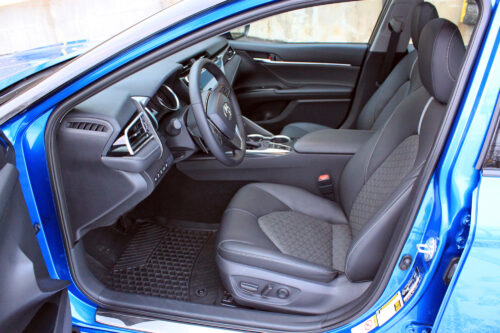 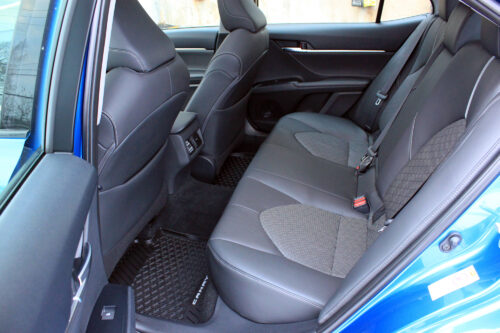 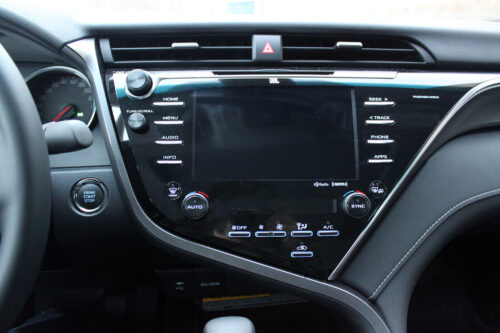 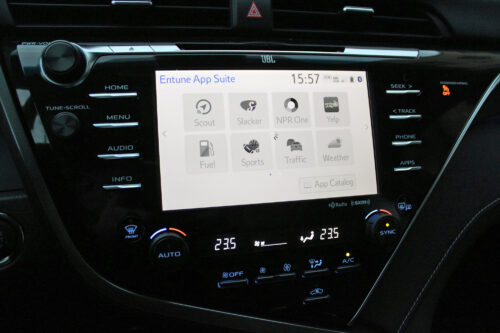 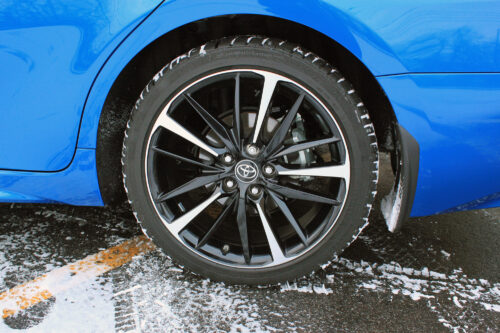 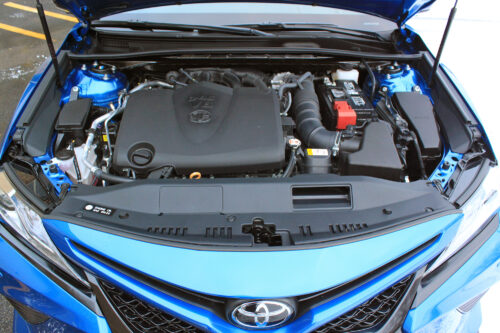 The new Camry is a good-looking car, and the two-tone blue/black paint job (a $540 extra) on the XSE V6 tester gives it a decidedly upscale look.

If you were only giving it a quick glance, you would think this was a luxury vehicle, not a Camry.

That speaks volumes to the work Toyota designers did on the eighth generation of the popular midsize sedan.

Buyers have a choice of two engines, with a 2.5-litre four-cylinder engine offered in most trims.

As you might have guessed, our tester was fitted with a 3.5L V6, paired to an 8-speed automatic transmission with paddle shifters.

It is rated at 301 horsepower and 267 lb-ft of torque, giving this midsize sedan plenty of jump.

It comes with a bit of a price at the pumps, with a combined fuel economy of 9.0 litres per 100 kilometres. The four-cylinder version of the XSE has a consumption figure of 7.4 L/100 km.
My average with the Camry came in at a disappointing 13.4 L/100 km.

Matching the Camry’s V6 power is a sporty styling on the XSE. In this guise, Toyota adds a sportier front grille, a rear spoiler, quad exhaust pipes and some really nice 19-inch alloy wheels.
The panoramic sunroof is also standard on the XSE, and it blends in seamlessly with the black roof.

And while the Camry looks good from the front, I think its best angle is the profile shot, which exposes all of its curves and lines – revealing a shapely body that is decidedly un-Camry-esque.
The XSE V6 also comes with premium LED headlamps and LED daytime running lights, as well as LED bulbs in the rear.

As surprising as the exterior design is, the interior is just as impressive to me.

That started with the black leather-trimmed UltraSuede sport seats for the driver and passenger, another feature that made the tester feel upscale.

The cabin design is fresh and modern, with the sinuous lines of the exterior continuing in the centre stack design. While dominated by black, the metallic accent trim that surrounds the stack breaks things up and it flows nicely into the rest of the dash for a nice visual effect.

The curvature of the stack allows for the USB ports and power outlet to be tucked away, and in the XSE, the storage tray under there doubles as a wireless charging station for your smartphone.
Rear passengers have a good amount of legroom, and there’s an armrest/cupholder that can be folded down when the middle seat is not in use.

Dominating the aforementioned centre stack on the XSE trim is a 8-inch display screen (up from the base 7-inch), which is powered by the Entune 3.0 Audio Plus system.

The XSE’s audio is also upgraded to a JBL Synthesis System with nine speakers and satellite radio.

I found the system to be fairly easy to use and it was well organized. Response times were good and there was a good mix of touch screen commands and physical buttons for various features.
The system includes Entune Safety Connect, which provides automatic collision notification, stolen vehicle locator, an emergency assistance button and enhanced roadside assistance.

It also comes with Scout GPS link, which uses your smartphone to power the navigation system.

While Scout helps you find your way, you will have 301 reasons to take the long way home – especially when the little falls asleep in the back seat in the middle of the afternoon and you want to let him dream on.

The V6 under the hood gives the Camry some jump, with good acceleration and a nice sound out of the exhaust. The transmission does a good job of keeping things nice and smooth and, while it came with paddle shifters, I pretty much let it do what it wanted.

The driving characteristics of the engine are controlled through the Drive Mode Select function, allowing you to toggle between Eco, Sport and Normal. For the most part, I left the Camry in Normal mode – especially given the icy winter conditions – and I found it to be pleasant. Eco mode tones things down a notch, while sport mode does the exact opposite.

The Camry’s ride is pretty smooth, no doubt in part to the sport tuned suspension.

But the drive quality is mainly the result of the new architecture that the Camry is built on, which pushes the wheels out closer to the corners and increases structural rigidity, among other things.

The XSE comes with additional safety features such as dynamic radar cruise control – a feature I really find useful – as well as auto high beams, pre-collision with pedestrian detection and lane departure with steering assist.

If Toyota was aiming to reshape the image people had of the Camry, the 2018 model will probably succeed in smashing many of the past stereotypes it fostered.

From the exterior styling, interior changes and the prowess of the V6, I thoroughly enjoyed my week with the Camry.

Most will probably opt for the smaller four-cylinder engine, which does change the driving dynamics a bit, but you will at least still look as good motoring around town.