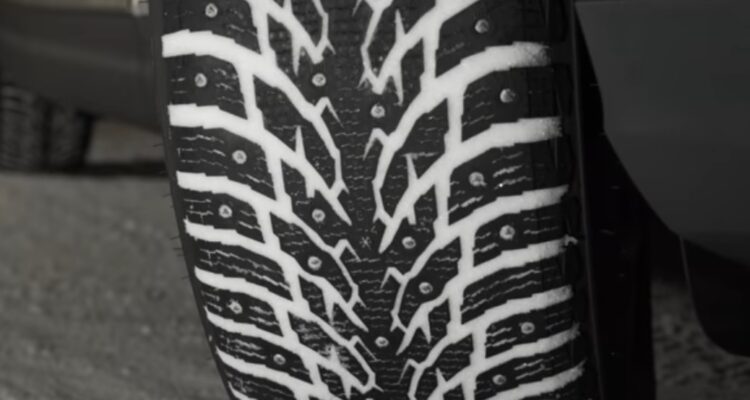 How much engineering can go into a little piece of hardened steel?

If your tire company makes studded winter tires and has a target of 10 per cent improvement in tire performance each year, a lot, apparently.

Among the many enhancements to the Nokian Hakkepeliitta 9 winter tire, due out this fall as a replacement for the respected Hakkepeliitta 8, is the latest generation of studs.

For the H9, as it’s called internally, the stud gets two new shapes, a new mounting scheme and two different sizes. For the first time, you get different studs on the outside of the tread than on the inside.

Matti Morri, the Nokian Tyres engineer known to staff as Mr. Tire, said his team targeted improvements in road noise, handling, braking and acceleration. One of the first areas they focused on were the studs.

What his team found were two deficiencies in the previous design, which included a hardened metal stud sticking out from a round mounting flange. Looking at the photo, you can see the square corner on the outside of the flange prevented full penetration into the ice. On the right is the new stud, with bevelled edges to ensure it’s the stud digging into the ice rather than the flange skipping across it. 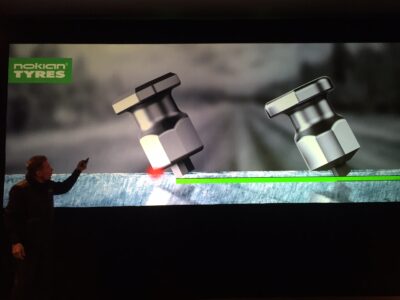 The bevels are on all sides of the stud flange, to allow the same penetration whether the tire is stopping, starting or steering.

Next, his team looked at the stud itself, and decided the shape of the previous stud was excellent for acceleration and braking, but less than ideal for the side forces generated when steering. A star-like shape was born, but only for the outside of the tread. Studs on the inside of the tread would get the previous trapezoidal shape.

Studs on the outside, in addition to a different shape, are also a shade longer for improved grip.

All studs are equipped with a soft layer behind the mounting flange that allows them to be compressed into the tread when contacting hard pavement, reducing both road noise and wear and tear to the road surface.

The rubber itself gained some improvements, both in tread design and in the compound used for the tread surface. The compound is called Green Elastomeric Plasticizer, and employs a significant percentage of canola oil, giving the H9 a distinct Canadian connection.

The oil doesn’t come from Canadian canola, but canola wouldn’t exist without the efforts of two University of Manitoba researchers, Baldur Stefansson and Keith Downey, who bred canola from the rapeseed plant to produce a crop that would provide an edible cooking oil.

The sipes on the H9 are also different. Typically, sipes — those narrow slits in tread blocks that give winter tires their grip — are cut to the edges of the tread block. Morri said that kind of siping creates movement, called tread squirm, that impairs a tire’s handling.

The sipes still open to create additional sharp corners for grip, but don’t move as much laterally. There are also V-shaped slits moulded into certain tread blocks that Nokian calls snow boosters, helping grip loose snow. As well, the SUV-rated tires are slightly different than the passenger-car tires, with small bridges between tread blocks that Morri said act to further reduce tread-block movement.

Cut into a certain part of the inner tread are the numbers eight, six and four, as well as a snowflake. Each number will disappear as the tire reaches 80, 60 and 40 per cent tread life. Finally, when the snowflake disappears, the tread is finished and it’s time for new tires.

Our visit to Nokia, a suburb of Tampere, included a tour of the factory where workers were still cranking out Hakkepeliita 8 tires. It was a fascinating education in the complex system that is a tire.

It’s called a system because it not only includes various parts — steel wire formed into belts and beads, polyester fabric — but also different rubber compounds that come together to create what looks like one seamless piece of rubber. 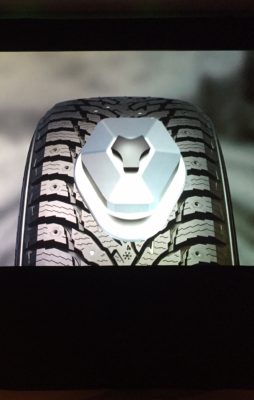 First, anything that’s not rubber must first be coated in rubber before it can be integrated into the tire. The bead — that collection of wires running around the inside circumference where the tire meets the rim — is moulded into what’s called the arch, which forms the base for the tire’s sidewalls.

In the H9, that piece is in turn embedded into a clinch compound, which Morri said improves contact with the rim and reduces the likelihood of the bead separating from the rim and losing air pressure.

The rubber compounds in various parts of the tire are chosen for durability depending on what that part of the tire does. Sidewalls must be flexible to absorb shock and steering forces, base layers must be durable to resist puncture, treads must be softer to maintain grip and the inner surfaces have to be strong to retain shape.

How does all this translate into on-ice performance? Our visit to Finland included a trip to Ivalo, a town 300 kilometres north of the arctic circle, and nearby Lake Pasasjarvi, where we put the tires to the test on a series of tracks plowed onto the frozen lake surface.

The cars were Audis, either Q5 SUVs or RS4 sports cars. While it was unfortunate the cars were programmed to lock out defeating the stability control — this was primarily an event for Nokian dealers, not automotive media — the combination of the new H9 tires and stability control meant despite some slick corners, you could take them at speed and stay on track.