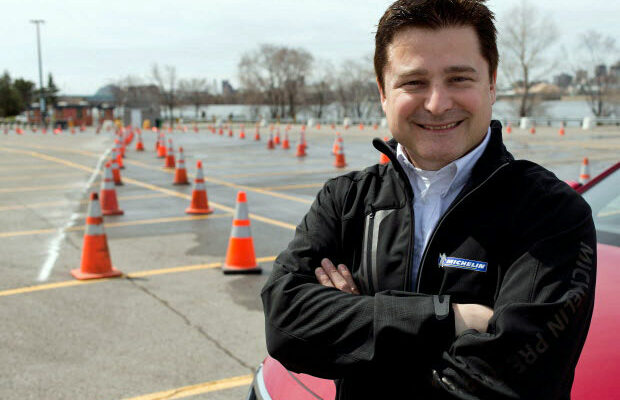 With the majority of Canada either in a deep freeze or about to get buried under a metre of snow, vicariousmag.com thought it would be an appropriate time to dig into the science of winter driving. Rather than pontificate amongst ourselves at the pub, we elected to go straight to the top and spoke with Carl Nadeau, Michelin driving expert and professional race car driver.

Carl’s worked with Michelin for many years [http://www.michelin.ca/CA/en/winter-driving/take-the-wheel-with-carl-nadeau.html], joining with them to teach drivers the best way to approach winter driving and how to get handle the situation if they find themselves in a tricky spot.

“Above all, the first thing I recommend to drivers trying to acclimate to winter conditions is to get comfortable in the correct driving position. That’s where good habits start,” explained Nadeau. “Putting one’s hands at the nine-and-three position on the wheel is important.” This is good advice, as your author remembers his father exhorting similar phrases at him during driving lessons, especially since I had a nasty habit of putting my hands at twelve-and-nothing.

One of the biggest ‘aha’ moments for a lot of people, our expert explained, is getting the driver seat in the correct fore-and-aft position. While this seems obvious, Carl makes the excellent point that drivers should be seated close enough to the pedals, so their leg isn’t fully extended if the unthinkable happens and they have a crash during an emergency braking scenario. A straight leg is more easily broken in an accident, after all. This is why selecting a car with a telescopic steering column is important when shopping for a new car.

If a driver does find themselves in a slide or skid, it is important for them to look in the direction they want to go. Looking at the solution, rather than the danger, will lessen the chance of bending any metal at the end of an unintended spin cycle. Carl says this is probably the most common mistake he sees new students making when they attend one of his winter driving clinics.

Regardless of one’s driving prowess, winter tires are an important safety element of any vehicle plying Canadian snow-covered roads. Rubber compounds found in all-season and summer tires stiffen up once temperatures dip below 7 degrees Celsius. The physical construction of a winter tire is different, too. Winter tires set themselves apart from their fair-weather brethren both mechanically (tread design) and molecularly (rubber compound).

This is why, Carl explains while chuckling, that winter tires should actually be called ‘cold-weather’ tires, as their molecular advantage becomes evident when the mercury drops, whether there is snow and ice on the road or not.

For example, Michelin’s X-Ice Xi3 winter tire uses a lot of silica in its construction, allowing it to remain pliable when temperatures plumb the depths of the thermometer. This allows the Michelin rubber to remain in contact with the road, allowing for more traction and providing a more sure-footed driving experience. The Michelin X-Ice Xi3 is warranted for 60,000km and as such, with the average Canadian driving about 10,000km a year during the winter months, should quell the common complaint levelled at winter tires given their softer rubber compound which lends itself to wearing out more quickly when compared to a traditional all-season tire.

Cross-Z sipes, so named for their zig-zag pattern, do dual duty on the X-Ice. As with other tires, the sipes help clear out liquid from between the rubber and the road, increasing traction. Their unique shape is designed to control shear stress, which reinforces each tread block, reducing wear and extending the life of the tire compared to tires with straight sipes. By strengthening the tread block, Cross-Z sipes also reduce that greasy feeling some drivers complain of when driving on winter rubber.

To demonstrate the value of sipes, try the following experiment. Take a block of normal styrofoam and push it along the surface of your kitchen table. It slid pretty smoothly, right? Now, cut four or five shallow grooves in the styrofoam’s surface and try to push it along the table again.

Different, eh? The extra surfaces you made when cutting grooves in the styrofoam create more area for grip. In the tire industry, those grooves are called sipes.

The X-Ice also has a uniquely-shaped contact patch to evenly distribute the forces of acceleration, braking, and cornering. Its directional tread design vacates water and slush, improving hydroplaning resistance by keeping the contact patch kissing terra firma. These are all filed under Very Good Things when designing a winter tire.

Carl had one final piece of advice before we wrapped up our interview. “Be smooth,” he said, echoing the advice given to teenagers across the country about to embark on their first date. “Too much of any input from the driver – whether it is acceleration, braking, or steering – will upset the car’s balance. Smooth inputs will remove one more variable from the winter driving equation.”

Install winter tires, stay alert, be smooth, and drive a reasonable speed for given conditions? Sounds like logical advice to us, no matter what part of the county – snow-covered or frozen – in which one lives.