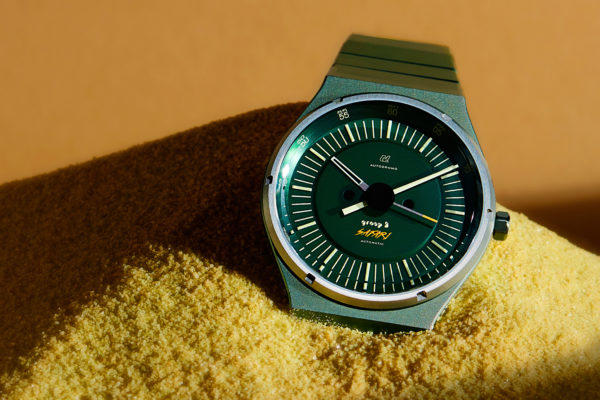 Autodromo Introduces The Group B Collection

The worlds of automobiles and watches are intricately intertwined, sharing history and evolution on and around the track. Some timekeeping brands embrace this link with singular models and special editions that draw inspiration from iconic tracks, cars and racers. Autodromo, on the other hand, a U.S. based motoring atelier has built an entire brand around this relationship.

Since their inception in 2012, Bradley Price’s designs have exuded the aesthetics of classic motoring and each of his releases under the Autodromo banner have excelled at getting the pulses of pistonheads racing. This latest release, a re-issue of their Group B Series 2 collection, is no different.

Inspired by rally racing’s short-lived, boosted, high-horsepower heyday of the mid-eighties, the Group B collection embraces a nostalgic look while also packing high-grade specs. Each timepiece features a bi-metallic case construction, using a two-piece titanium capsule to house its automatic movement. The stainless steel bracelet acts as an integrated piece but can be easily swapped for a different style of strap, thanks to the drilled lugs. Measuring at 39mm in diameter, the Group B is also sized according to the era that inspired it and it sits slim on the wrist, with only a 9mm height. The minimalist, high-contrast dial, regardless of colourway, is easily legible and keen eyes of Group B rally aficionados may spot its resemblance to that of the legendary Lancia 037 rally car.

Unlike that iconic Lancia, there is no supercharger under the hood here. The Group B Series 2 is powered by the same Japanese Miyota 9015 automatic movement that was found in earlier releases (and countless other boutique brand watches). It is a robust and reliable calibre that whirs away at 28,800 vph (vibrations per hour) and features a 42-hour power reserve.

Highlighting this latest release is the Night Stage III variant. Limited to only 200 pieces, this version of the Night Stage features a black and red grid pattern on the dial and a matte finish everywhere else. It’s definitely a looker and, depending on what time of day you read this, may already be sold out. Worry not, though as the other Series 2 versions are getting a full product run. I personally dig the deep-toned green finish and the yellow scripted “Safari” font (that coincidentally can also be seen on Leh Keen’s Porsche Safari conversions) but at $975 it’s honestly hard to go wrong with any of the choices here and I debated long and hard on the Corsica Blue model — it was just a little too Miami Vice after all was said and done. This re-release of the Group B Series 2 is timed right for summer and watches are expected to ship at the end of May.