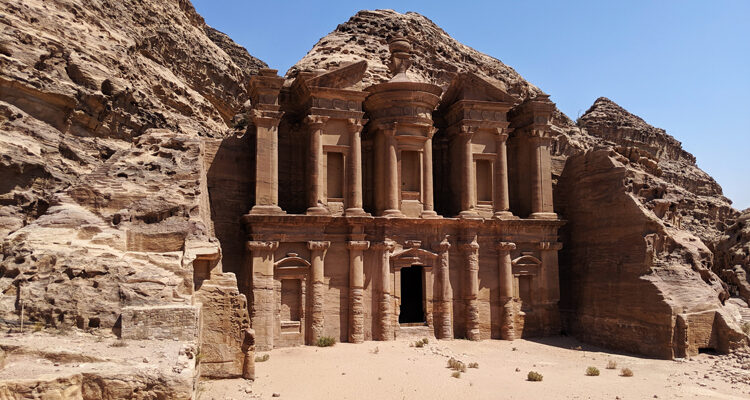 Amman And Petra Come To Life

I have never really considered the Middle East as a travel destination. It’s easy to get swept up in media reports or politics and dismiss that entire region as a potential vacation option without digging deeper into what it may offer. Luckily, my wife is not that type of person and convinced me that we should visit Jordan.

In mid-September 2019, we left behind the few remaining summer days in Toronto and flew to Amman, the capital of Jordan. Amman is a city that is immediately striking as it sprawls across a collection of hills adorned with buildings and ancient ruins demonstrating a mix of Arab, Byzantine and Roman influences. Our hotel, the W Amman, was within the ninth circle of the city and was one of a handful of newly built towers that dotted the skyline. It also features a gorgeous rooftop bar and its design draws influence from the local street art scene that has been bourgeoning within Amman over the past few years.

To explore the city, we used Uber or taxi. Public transit is largely inconvenient and buses run infrequently. Driving in Amman is an option but traffic is heavy at most hours and parking is hard to come by. Add to that the fact most drivers in Amman view lane markers and turn signals as optional as they honk and speed around the city’s notoriously tight and winding streets. It can be intimidating.

We hired a ride to the top of Amman to see its ancient ruins, most notably the Citadel, and to gain a spectacular 360° view of the city. The 6,000 seat, Roman Theater built during the 2nd century was also a highlight as it stood at the center of the Hashemite Plaza.

To experience Amman’s nightlife, we ventured to Al Rainbow Street where many great restaurants and cafes are open late. We arrived at Sufra restaurant at 7:00 p.m. only to find there was no space, so we made a reservation to return for 9:30. A few streets over we discovered Books@Cafe, an establishment frequented by both locals and tourists (LGBTQ+ friendly). The main floor bookshop sold books in Arabic and English, with a large section devoted to cookbooks and cuisines of the Levant region.

At the far side of the shop was a staircase leading to the space’s rooftop bar. While overlooking the hills of Amman we drank blond ales from Carakale Brewing Company, Jordan’s first microbrewery, and smoked Shisha (flavoured tobacco) with our server stopping every-so-often to rotate and replenish the hot coals feeding the hookah. To whet our appetites for Sufra, we ordered a plate of hummus complete with whole chickpeas and fresh olive oil pooled at the centre of the dish. If not to fulfill all of our senses, the Muslim call to prayer sounded out in unison from mosques across the city blanketing the night sky – a calming and surreal experience.

Returning to Sufra restaurant, we sat at a table in the restaurant’s courtyard. The lush greenery within the courtyard paired with its elegant fountain stood in stark contrast to Amman’s dry, harsh backdrop. The meal was elegant, yet comforting as we ordered traditional Jordanian homemade dishes filled with lamb, dates, and enticing Middle Eastern spices.

After our short stint in Amman we made our way towards Petra, one of the Seven Wonders of the World. We rented a car and drove through the Jordanian desert, taking a couple of detours from the King’s Highway, which connects Amman to Petra, to explore a few of Jordan’s other tourist attractions.

First was Mount Nebo, a view that is sure to amaze and is documented as the place where Moses and the Israelites were first able to see the Promised Land of Israel. Even if you’re not interested in this type of history, being able to take in nearly the entire region from the Sea of Galilee to the Dead Sea at once is breathtaking. We also stopped at Bethany Upon the Jordan, the site of Jesus’ baptism and a hotspot for religious pilgrims who filled the narrow river in all-white gowns from both the Jordanian and Palestinian side to perform their own baptisms.

Continuing on the road towards Petra we were stopped multiple times at random roadside checkpoints managed by the Jordanian Army. Like in Amman, the soldiers spoke English and after reviewing our travel documents offered us a friendly, “Welcome to Jordan!”, a phrase we would hear nearly everywhere we went during our time in the country.

We arrived in Petra that evening and checked into our room at the Hotel Mövenpick Petra Resort. Book early as hotels in the area are in high demand and were undoubtedly the priciest we encountered on our trip. In addition to its phenomenal rooftop bistro that specializes in Jordanian barbeque, the Mövenpick is an excellent choice because of its location, just a few minutes walk from the entrance to Petra.

Petra is a UNESCO World Heritage Site and its archaeological city features two major landmarks along its main path, the Treasury, a key location shown in Indiana Jones and the Last Crusade, and the Monastery. The Treasury is just 1.5 hours hike return from the main entrance, while the Monastery is about five hours return. As you progress into the hike, the local Bedouins who are riding back and forth will continually offer you a camel, donkey or horseback ride and while it’s tempting given the 30 degrees+ heat, we opted to hike. We made our way through the walled chasms known as the Siq to reach the Treasury, a mausoleum dedicated to a Nabatean King dating back to the 1st Century AD and carved into the rose-coloured sandstone that dominates the area.

Moving past the throngs of people, you can see the ornate detail carved into the rock face. If you have the time, consider booking the Petra at Night tour as the valley is filled with candles, offering an entirely different experience. As you continue from the Treasury to the Monastery we passed many other sights including tombs, an amphitheatre, long-abandoned villages, and a temple along the relatively flat, sandy pathway. The hike to the Monastery takes an additional few hours as we climbed approximately 800 steps that twist alongside the mountain.

The hike up to the Monastery is by no means lonely as we shared it with other tourists, feral cats, goats, and Bedouin peoples as they sell refreshments (you’ll pay the $6 for a cold Gatorade, trust me), trinkets, and guide people up by donkey ride. As we ascended the last set of stairs and attempted to catch our breath, the beauty of the Monastery staggered us. Although similar to the Treasury, it’s much larger in stature and because not nearly as many people brave the trek to the top it feels almost as if you’re sharing the accomplishment with some close friends rather than strangers. The hike back down is speedier but because we left in the morning, at this point we were battling the hot afternoon sun and exhausted. It became clear to us why many people allocate two days for Petra so that they can hike at a more leisurely pace and even visit some of the offshoot trails from the main path.

Last on our list for Jordan was Aqaba. Aqaba is a city on the Red Sea known for its beaches, snorkeling and tourist resorts. Palm trees line the streets and the vibe is much different from the rest of Jordan, moving at a much slower pace especially when compared to Amman. Aqaba is home to the Royal family of Jordan and as we drove to the border crossing, our taxi driver pointed out the gates to the palace of King Hussein II. Aqaba is also one of three land border crossings into Israel, as it shares the Red Sea with its neighbour Eilat. Although Israel and Jordan have a peace agreement, the border is not open to vehicles and after being dropped off at the border entrance, we loaded our luggage onto a cart and hiked the couple hundred meters to cross into Israeli territory by foot, ending our time in Jordan.

Jordan is an excellent starting point for those wanting to visit the Middle East for the first time. The people are friendly with a laidback attitude towards tourists, and many speak English. With a rich mix of history, culture, adventure, and nightlife, Jordan has something for every type of traveller.