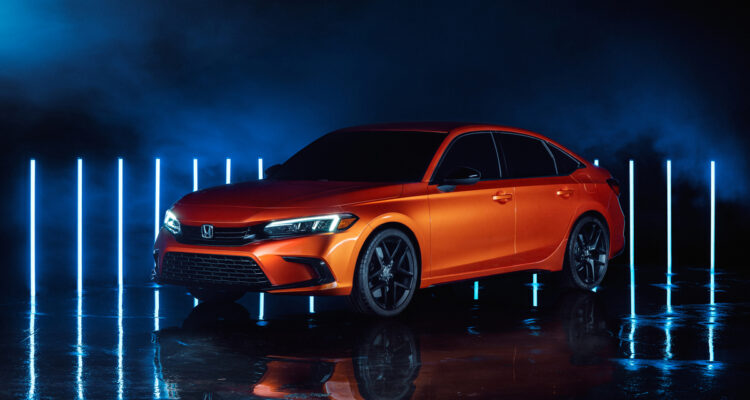 We haven’t seen all that much, but what we have seen from the 11th generation Honda Civic – revealed today via the Twitch streaming platform – is intriguing. Almost as intriguing as the choice to reveal the car on Twitch in the first place; this is a new day and with COVID putting pause to in-person reveals for now and with Honda trying to reach a younger buyer with the new Civic, Twitch was the way to go.

Shown only in an appealing burnt orange colour that recalls the colour that people will always remember splashed over the muscular curves of the BMW 1 Series M Coupé circa 2012, the new car keeps some of the edginess of the current 10th generation car but smooths it out and grows it up a little. From the rear three-quarter angle especially, not only does the paint recall that great compact BMW but so does the stance, all low and wide and looking ready to pounce.

While we haven’t been given the specifics on which eventual production model this concept sits closes to, we have a feeling that with that great colour and black wheels, it could very well be a harbinger of the new Si. Which, by the way, is not the most hardcore Civic that will arrive come late 2021; to the delight of many fans, the Type R will be making a return as well and the Civic will be available in both hatchback and sedan body styles. The coupe body style wasn’t named alongside the hatch and sedan models during the reveal as that body style won’t be making the cut this time ‘round due to slow sales.

From the front, the fact that Honda has moved the a-pillars back towards the driver means they will get a better view out, but also that the hood appears a little longer that it has previously. The way the new front fascia and headlight treatment juts out a little from the nose further contributes to the cab rearward profile. That’s a new bit for the Civic, which lately has gone to a short nosed, much more cab-forward look, although that was more the case for the eight and ninth generations as opposed to the tenth, which now that we’ve seen the new car, appears to have been a harbinger for a new direction for the popular Honda compact’s styling.

They haven’t spilled the beans with regard to powertrain tech and choices, but Honda does say that the new car will be more rigid than previous and safer for both drivers and pedestrians in collisions due to an advanced version of what they’re calling an “Advanced Compatibility Engineering (ACE)” body structure. The big question when it comes to the new Civic’s powertrain, of course, is whether or not some form of hybrid technology will be included, or if they’ll be again running with the 1.5-litre turbocharged four-cylinder that debuted on the 10th-generation car – or perhaps both.

Only time will tell so keep it locked to Vicariousmag.com as we continue to bring you the latest news and insight on the 11th-generation Honda Civic.