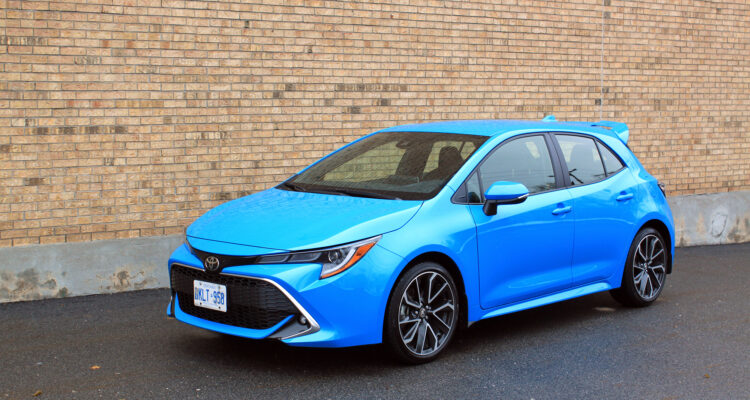 Hatchbacks are not a new thing for Toyota, with the Matrix and Scion’s iM sold in the Canadian market previously. But neither really had a long life.

The Japanese carmaker is certainly hoping that trend changes with its latest attempt to stick in a very competitive segment, the 2019 Toyota Corolla Hatchback.

It goes up against some well-established models, some of which have very loyal followings. 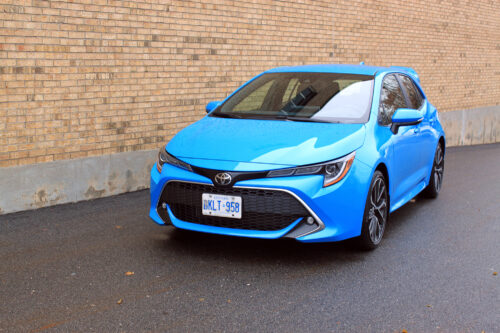 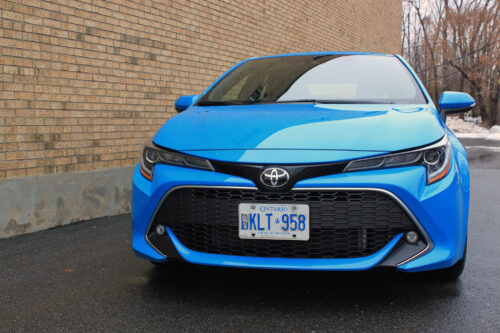 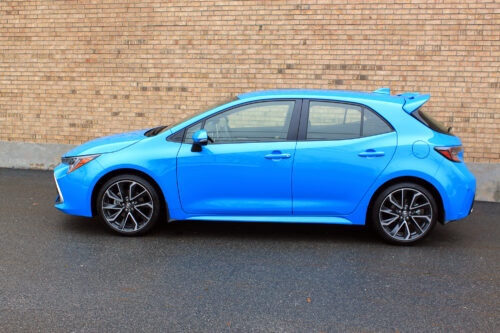 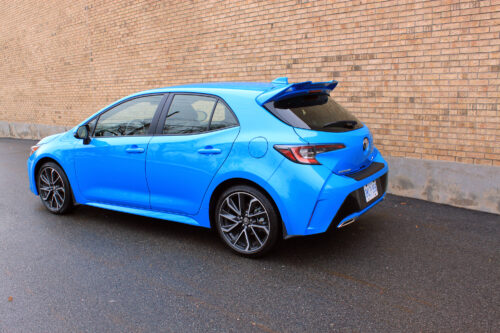 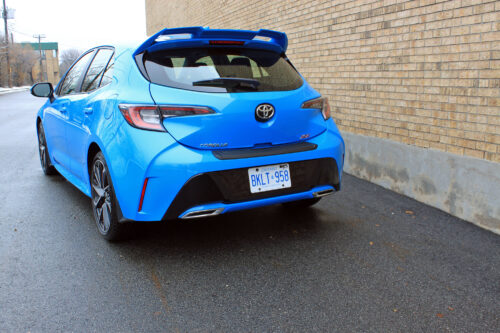 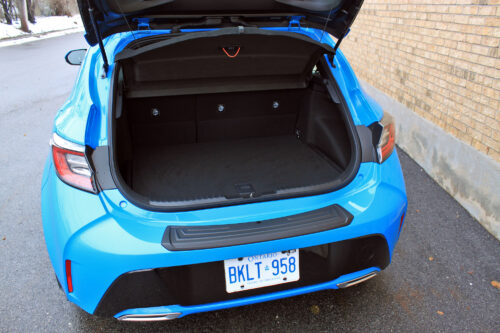 However, the Corolla Hatchback has some quality attributes that include attractive styling, lots of equipment (standard and otherwise) and delivers a good driving experience.

The starting price for the S trim with a six-speed manual transmission is a very reasonable $20,980 (add $1,000 if you want the CVT). Other trims are the SE, SE Upgrade and our tester, the XSE.

The top of the line trim comes stacked with equipment, but that comes with a price that jumps to $29,752.50 when all the fees are added in.

So, you are well taken care of.

Under the hood is an all-new 2.0-litre four-cylinder engine that delivers a good amount of horsepower (168) and 151 ft-lb of torque. However, the maximum torque output is available at 4,800 RPM, which leaves lots to be desired at the lower RPM range.

In our XSE tester, the engine was paired with a Direct Shift CVT that has 10 sequential shiftmatic speed steps, a sport mode and available paddle shifters.

Combined fuel economy for the XSE with the CVT is estimated at 6.7 litres per 100 kilometres, while our week with it returned an average of 9.5 L/100 km.

The Corolla Hatchback is definitely a looker, especially in the Blue Flame paint colour of our tester.

It is built on the automaker’s new Toyota New Global Architecture (TNGA). Thanks to that, it has a low, wide stance that gives it a low centre of gravity.

The Corolla Hatchback is nicely sculpted, starting from the oversized front grille, the sleek headlight assembly, the body’s accent lines and a rear spoiler to cap things off.

At the back, you have sleek wraparound taillights and some interesting design lines, while the 18-inch alloy wheels on the tester also help it stand out.

Inside, the Corolla Hatchback offers a clean interior design that, while far from flashy, is quite good. 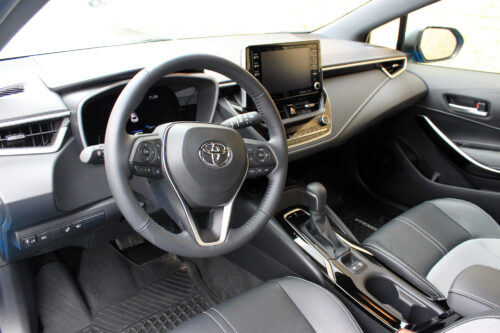 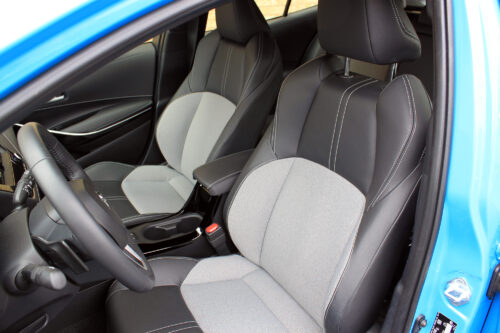 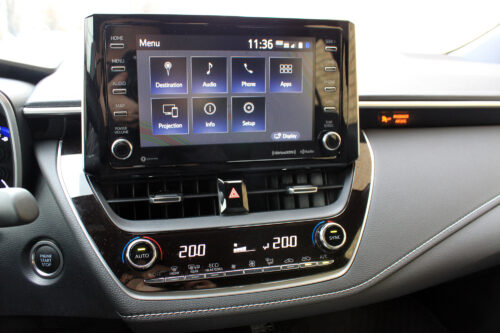 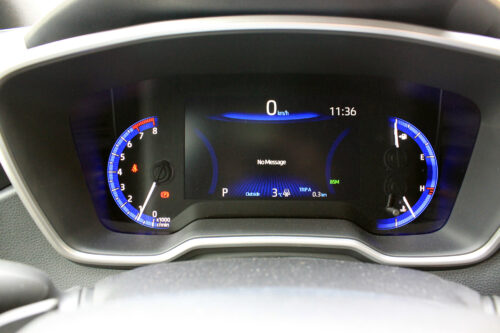 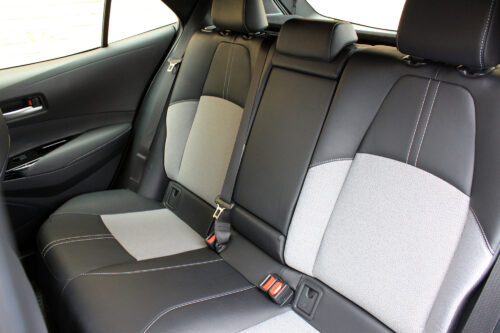 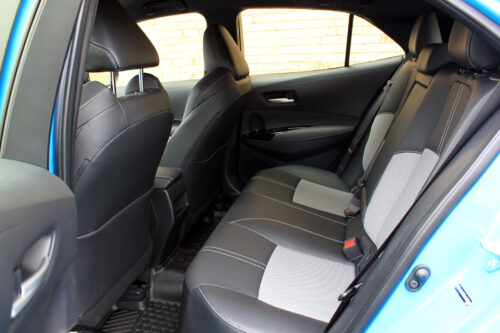 You have the ubiquitous screen that protrudes from the centre stack, which elicited some negative comments from passengers. At 8.0-inches, it is quite large and we will look more into what it does later.

The front seats, which in the XSE are a mix of leather and fabric, are actually quite comfortable. And they are heated, with the driver’s seat offering eight-way power adjustment.

The driving position is good, giving decent lines of sight from all angles. The XSE offers the driver a 7.0-inch digital information screen in the gauge cluster, which is flanked by a tachometer, fuel and temperature gauges.

Front passengers benefit from a good amount of space, but rear quarters are a bit tighter, with even a 5-year-old requesting the passenger seat be moved forward for extra room to stretch his legs.

The rear bench does offer a 60/40 split so it can be lowered to expand the cargo area, which is good but not great.

The aforementioned central display screen is the heart of the Corolla Hatchback’s Entune infotainment system. Apple users will rejoice in the fact that the system is compatible with CarPlay, but Android Auto is inexplicably left out of the mix.

The system operates just fine with little lag, although the graphics are a little behind the times for a 2019 model offering.

All things considered, though, it’s a good package, especially with the fact the XSE trim comes with embedded navigation.

With the system telling you where to go, the Corolla Hatchback does sometimes struggle to keep up with your demands to get going. With the max torque available at the high RPM rate mentioned before, you will be forced to mat the accelerator to get going in a hurry. And at highway speeds, it’s especially noticeable.

That’s a shame really because overall, the Corolla Hatchback is a good little city driver. It handles well and is a smooth operator over some rougher roads.

Road noise intrusion in the cabin on city streets is very minimal, while wind noise is noticeable but not overbearing at highway speeds.

The Corolla Hatchback has a veritable hill to climb against some established competition, but with the Toyota reliability factor and the long-standing Corolla nameplate, it’s got a fighting chance.