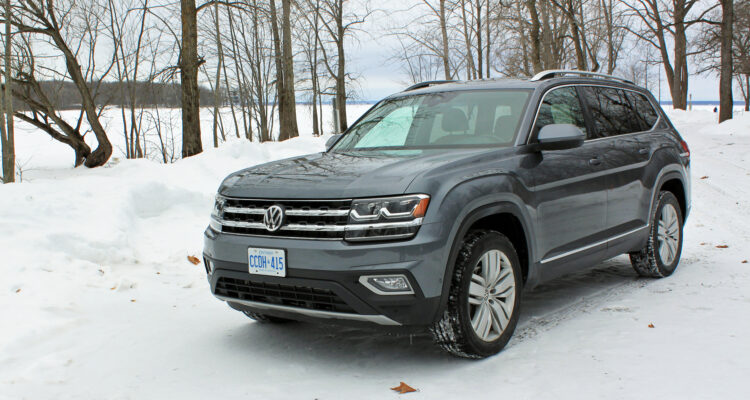 Volkswagen has set its sights on the three-row SUV segment in North America with the first vehicle it has designed specifically for this market.

The 2018 Atlas is a sleek-looking seven-seat people mover that enters a market that continues to grow in popularity and available models.

As a new entry, the Atlas has to distinguish itself from the pack, and it does this on several levels, especially on the Execline we tested. Not the least reason it stands out is the available Kurkuma Yellow Metallic paint colour, which definitely grabs ones attention. Our tester was a mood subdued Platinum Grey Metallic. 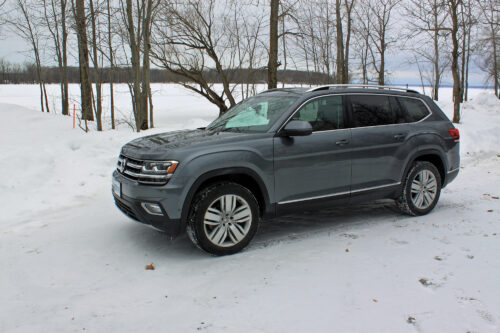 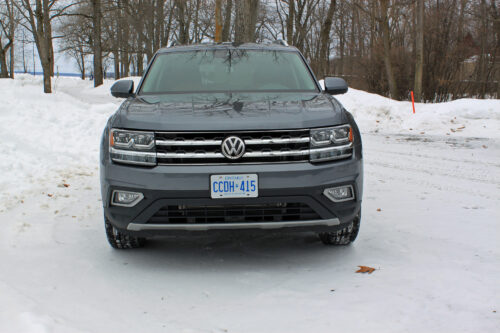 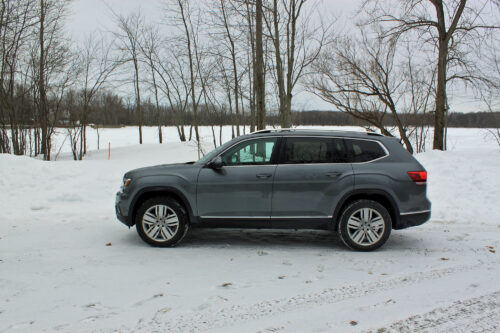 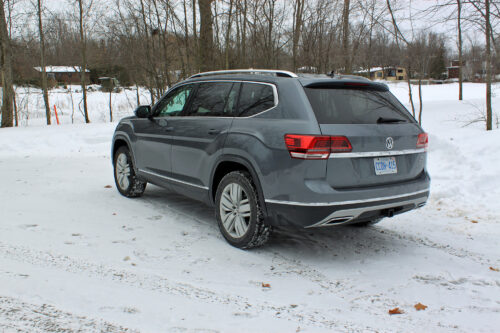 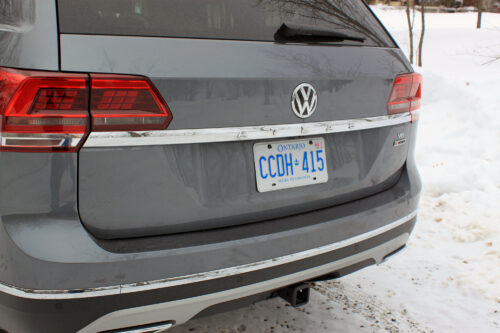 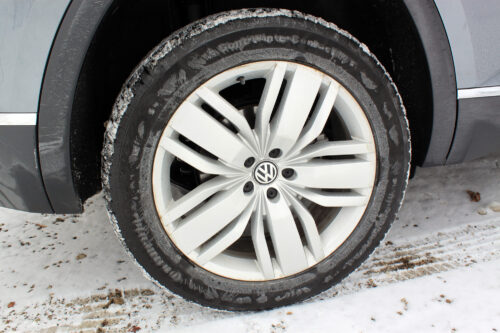 The Atlas comes in four trims, with pricing starting at $35,690.00 for the base Trendline.

The Execline tested comes in at $52,540.00 before fees and taxes, but also includes some nice bells and whistles.

The Atlas has two engine choices, the smaller of which is a 2.0-litre four-cylinder powerplant on the Trendline and Comfortline trims (235 horsepower, 258 ft-lb of torque).

The Highline and Execline come with the larger and more powerful 3.6-litre V6 and its 276 horsepower and 266 ft-lb of torque.

Both engines are paired with an 8-speed automatic with Tiptronic and the tester also had Volkswagen’s 4MOTION all-wheel drive.

Power from the V6 engine is good but not great considering it is less than some competitively sized vehicles on the market.

Despite the lower power figures, the Atlas’s styling is definitely more muscular that the competition.

Up front, there is a large chrome grille, which blends in seamlessly with the large headlight assemblies (which are LED headlights).

The arches over the wheels are heavily flared and an accent line that runs the length of the vehicle breaks up the large expanses of sheet metal.

At the rear, the LED taillights cap off a design that includes some angular lines and two chrome exhausts.

Large rear doors make access to the second and third row of seats a little bit easier than in some other models.

On our tester, the exterior look features a set of 20-inch Melorada alloy wheels.

Inside the Atlas, occupants are treated well.

In the Execline, a panoramic power sunroom bathes the interior in natural light.

The tester’s interior had an elegant look to it thanks to the two-tone black/golden oak vienna colour scheme, including leather seats. 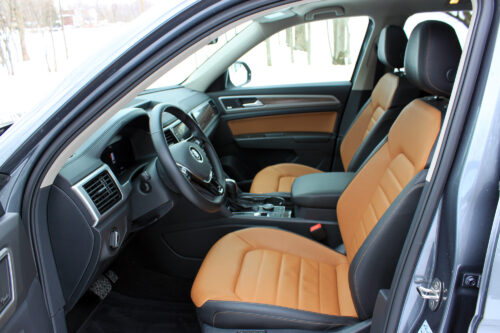 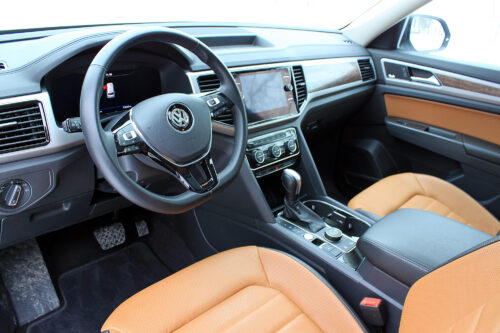 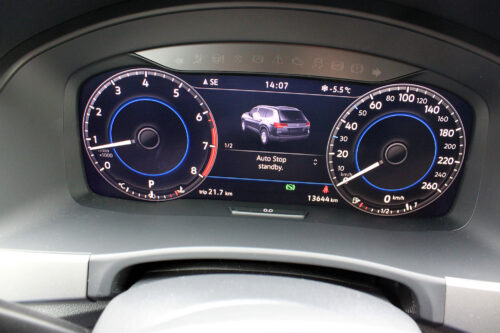 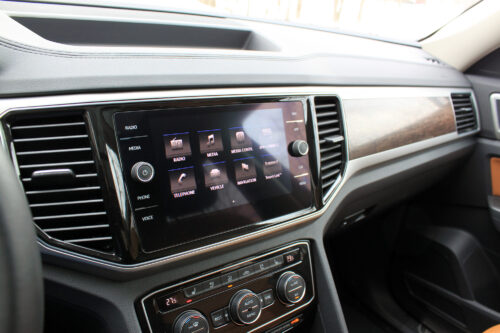 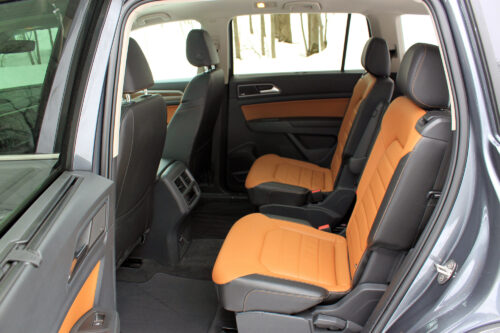 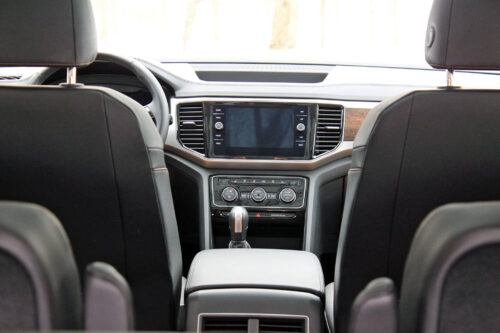 Both the front and middle row seats are heated, while the front seats are also cooled for those warmer days.

The tester also features birch brown wood trim around the dashboard and in the doors.

A three-zone climate control system makes sure that no mater what row you are in, you will be comfortable.

The driver in the Execline also benefits from the Volkswagen Digital Cockpit, a 12.3-inch screen that replaces the traditional dials and gauges of the instrument cluster.

Instead, you get a customizable screen that can display a variety of information based on how you set it up.

The cabin is also a pretty quiet environment when on the road, all the better to enjoy the sound from the Fender premium audio system and its 12 speakers and subwoofer.

The hub of the infotainment system is an 8-inch screen that gives you access to the radio, other media and a navigation system.

Out on the road, the 4MOTION system’s setup can be adjusted through the driving profile selector for optimal settings based on road conditions, be it snow, dry pavement of off-roading.

If you do hit the mountains, the Atlas also comes with Hill Descent Control, and the tester was fitted with the towing package that allows for a maximum capacity of up to 2,268 kg.

Accessing the large cargo space is made easier thanks to the available power lift gate with easy open function, which allows you to open the lift gate with a kick of your foot (as long as you have the key fob on you).

In all, the Atlas – especially in the Execline trim – has all the bells and whistles you could possibly ask for.

It has room for up to seven people in comfort, looks good and offers plenty of creature comforts (let’s not forget the 10 cup holders) to keep everyone happy. About the only thing missing for those long road trips are some headrest mounted TV screens for the kiddies.