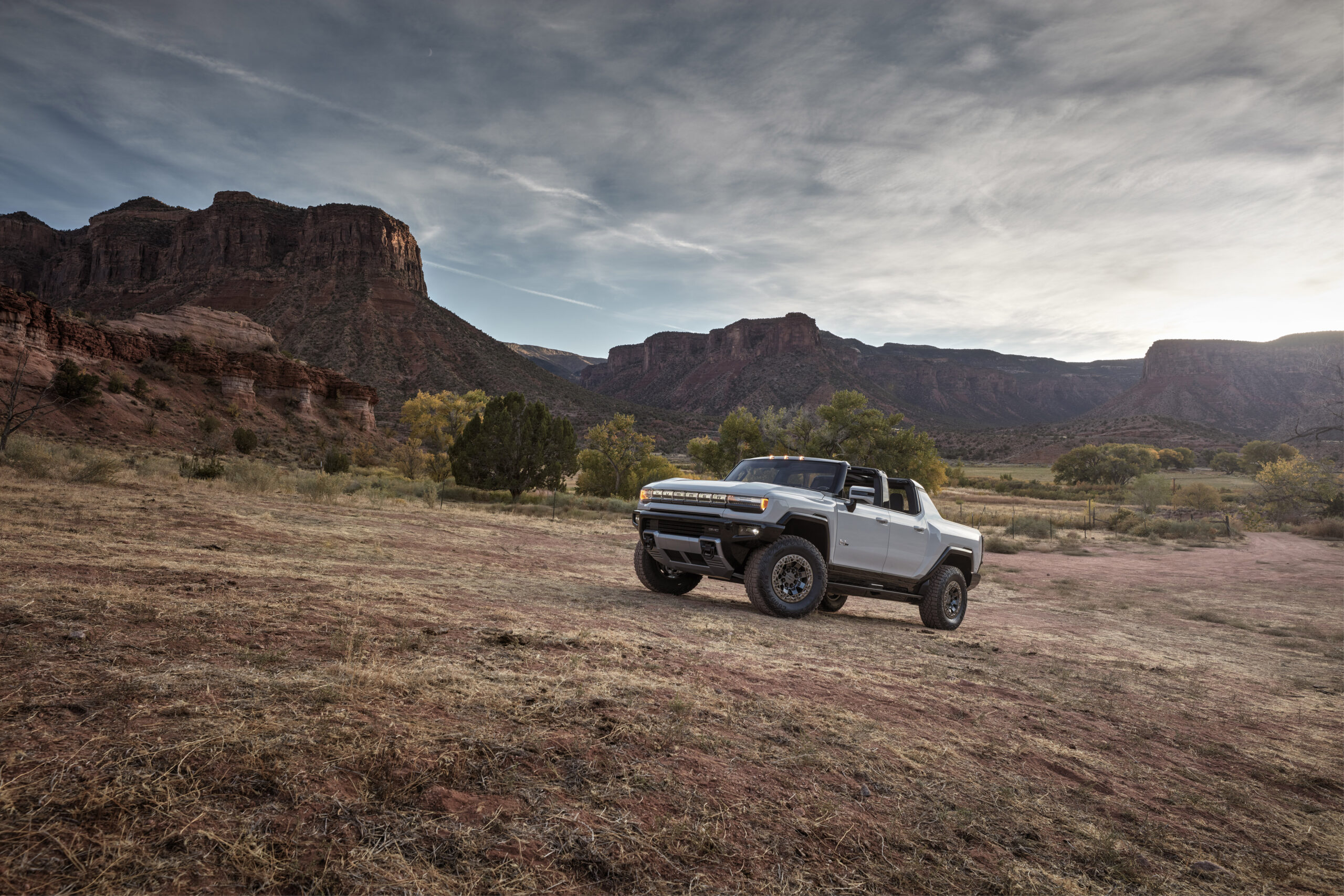 If you had told be when we bid adieu to the last (non-military, of course) Hummer in 2010 that the brand would be reborn as an electric pickup, I probably would have said you’re off your rocker.

However. Times have changed, and now that we’ve officially been introduced to the GMC Hummer EV, it seems like a perfectly logical move because what would have sounded like an unequivocally outlandish notion back then has become not quite the norm, but a very real future today. Rivian, Bollinger, Tesla and somewhat less-officially-but-still-officially Ford have already all brought their ideas for an EV pickup to the table and so General Motors had to pull up a chair themselves.

And they’ve done so in a big way with the reveal of the 2022 GMC Hummer EV. It’s not a heavy-duty truck, not a light-duty truck (indeed, in the absence of any official towing or hauling figures, GM wouldn’t even really tell us under which traditional truck category the Hummer would fall closest to), but rather a “Supertruck” which is a title that GM pretty much came up with all on its own volition.

And indeed, why shouldn’t they have? Just look at the figures: 1,000 horsepower. 11,500 – no, there isn’t an extra “1” in there – pound-feet of torque depending on how you’ve equipped your truck. And there are different equipment levels as GM is championing the GMC Hummer not as a single model, but as an entire line-up: the Hummer EV2 (US $79,995 – Canadian pricing is yet to be released), the Hummer EV2X (US $89,995), the Hummer EV3X (US $99,995) and the big daddy Hummer EV Edition 1 (US $112,595) whose reservations are full and is currently the only way to get that full slug of torque. Not that the other models’ torque figures are modest; they range from 7,400 lb-ft to 9,500 lb-ft, while horsepower ranges from 625 hp to 800 hp. The most powerful of these can complete the 0-100 km/h sprint in under three seconds, something that GMC calls “Watts to Freedom” and no, that’s not a collection of poetry out of South Central Los Angeles. Rather, it’s the name of the Hummer EV’s launch control system. As you do.

Of course, as we all know, torque figures are relatively nebulous as we have to make sure we’re talking abut engine torque vs wheel torque and while GM wouldn’t elaborate, it looks like those are more wheel torque figures, and they actually aren’t that far beyond what traditional super and heavy duty pickups make in terms o wheel torque. Now, the Hummer EV has no engine per se (rather two or three EV motors mounted to the axles, depending on trim) so we can’t really talk in terms of engine torque, it appears that if we were to compare apples to apples, the Hummer EV Edition 1 would make something like 1,300 lb-ft of engine torque. Or, more specifically, the torque figure we usually use when preparing a vehicle’s stats package. 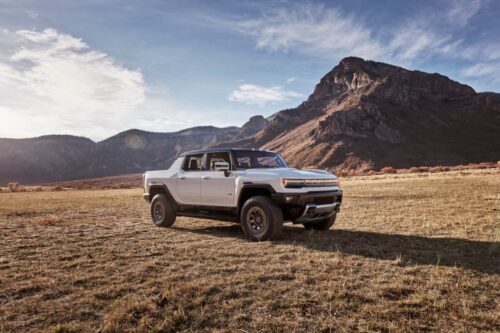 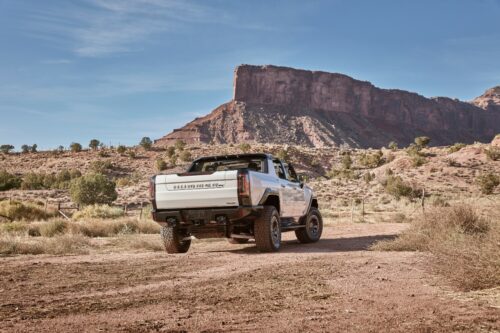 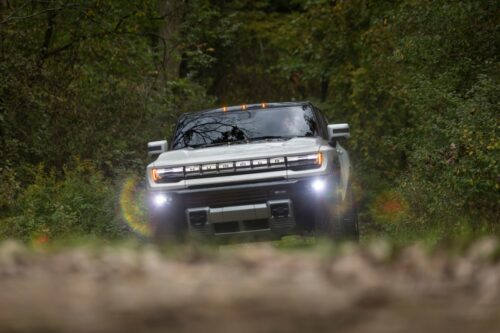 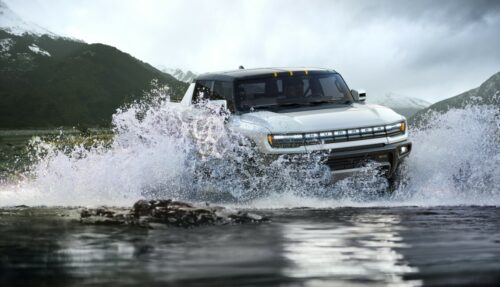 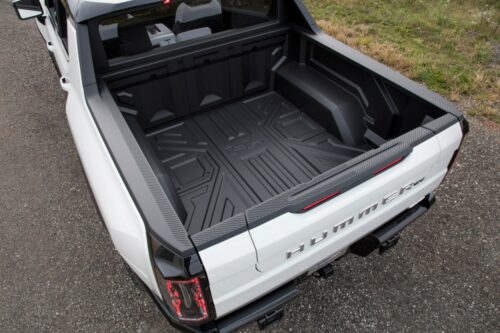 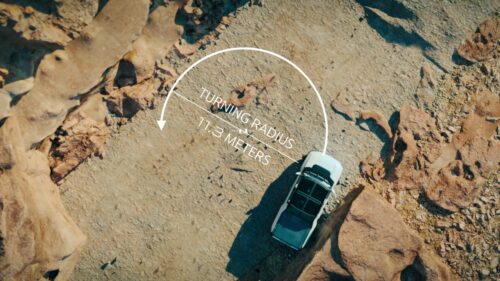 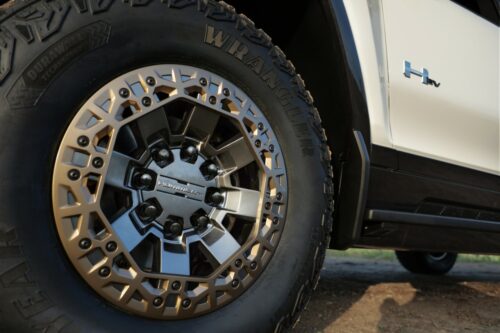 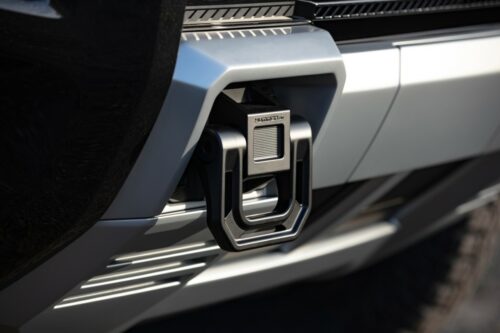 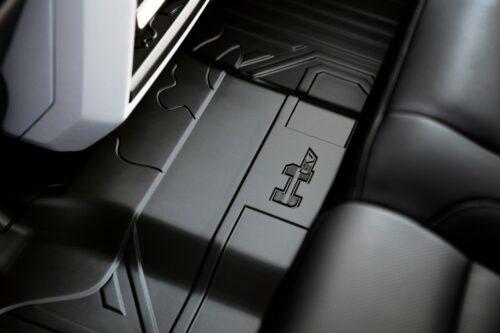 Regardless of all that though, this is one capable vehicle in that since it was built from the ground-up around GM’s new modular Ultium battery system, it’s actually the stiffest truck they’ve ever made and has all sorts of nifty features to help it along; a quick-lifting suspension system that can be activated to clear large bumps off-road (or perhaps small cars) and to get the Hummer un-stuck, air suspension, electronic locking differentials, Multi-Pro Tailgate first seen on the GMC Sierra pickup, and how could we forget the  “CrabWalk” feature? Basically, CrabWalk is like a rear-axle steering system taken to the nth degree (well, the 10th degree, actually, as that’s how much each rear wheel can rotate) that allows the vehicle to move diagonally to get around obstacles and gives the Hummer EV the same turning circle as a Chevrolet Sonic compact.

And then, there’s the charging.

Its is of course DC fast-charge capable but it is able to withstand a 350 kW charge rate, which is currently the fastest you’ll find from public chargers and the Porsche Taycan is the only other EV out there that can make use of that current. That will give you 160 km of charge after just 10 minutes of charging; a full charge, meanwhile, returns an estimated 560 km of range.

Of course, it should come as no surprise that it comes with all manner of interior tech to make you feel like you’re not driving a hulking truck, but a bonafide, futuristic EV. There are a total of two display screens inside – a 13.4” infotainment display, and a 12.3” gauge cluster display – that can all be changed by the driver or will do so automatically depending on which of the five drive modes (Normal, Off-Road, Terrain, Tow/Haul and MyMode, which is driver customizable) you’re in. There’s even one-pedal driving, that, if it works similar to how it does on the Bolt, forces the EV motor to operate in reverse to not only charge the battery, but to allow drivers to come to a complete stop without ever touching the brakes. There are even removable roof panels, so you can essentially turn your Hummer EV into a T-top style convertible; anybody who knows Hummers, knows they come in a variety of body styles and they’re trying to tick all those boxes right here.

They’re doing this because if you’re going to release a whole new range of vehicles, there has to be a reason for that to exist. It has to appeal to a broad spectrum of customers and while at the end of the day, the Hummer EV is a big, honkin’ truck with a big footprint and ride height to match, there really looks to be something for everyone here. Indeed, the discontinued Hummer line-up moved pretty far away from the HMMWV military truck and while in all likelihood the costs of re-starting a whole brand weren’t feasible, the variety presented here really is the next best thing.

You will have to be patient, however, if you want one of these beasts; they won’t be coming to any markets outside of the US until 2022. Which is interesting because you just know that by then, the competition mentioned earlier will have also brought their their trucks to market and what was once a unique segment will all of a sudden be quite the busy place.