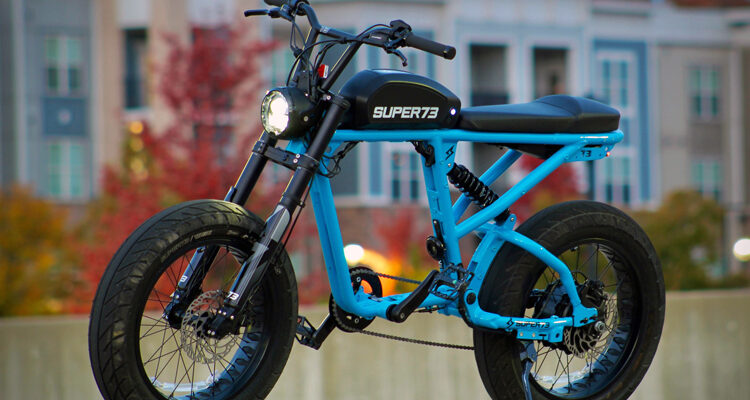 As the leaves traded their summer green for October orange, a sizable box was delivered to my driveway. Chuckling at the cheeky “Heavy A.F.” markings, I unlocked the plastic fasteners, pleased to find an almost fully assembled SUPER73 electric bicycle under the lid. Hex key and spanner from the tool kit in hand, I installed the handlebars and pedals, then put the bike on the charger (taking note that the bike must be turned on to charge). The display indicated 32% left until fully charged, so I went back inside to study my local e-bike regulations before playtime. In the two weeks that followed, SUPER73’s R-Brooklyn dethroned my stable of deft motorcycles. In the evolving urban landscape with growing regulations, SUPER73 opened my eyes to alternative commuter ways, recreation, and a new horizon of two-wheel opportunities.

Since 2016, SUPER73 has been making electric bicycles in Orange County, California. In 2020, they released the new R series of class-2 e-bikes, featuring inverted telescoping front forks and adjustable rear shock. Here in the U.S., the class-2 rating means that with pedal, or throttle assist the bike can travel up to 20 MPH with equivalent access rights as “analog” bicycles.

Grabbing my old mountain bike helmet from the shed, I rolled the SUPER73 back into the driveway. Like its stablemates, the Brooklyn came with a removable battery, smart display, full hydraulic disc brakes, horn, and wearing 20-inch wheels. New in 2022, the R Brooklyn sports an 1100-lumen LED headlight, brake light, and shod with a set of bespoke “LZRD” fat tires.

Out on the road, I thumbed through the different riding modes on the smart display. Level 1 offers pedal assist up to 20 mph, while level 2 lets you cruise with just the thumb throttle. In addition to the smart display, SUPER73’s smartphone app can adjust mode settings and even offers bicycle-friendly navigation. Accompanying range and speed, when running navigation, the smart display will show direction and distance to the next turn. Through the SUPER73 app riders on private property can also unlock access to Class-3 and “unlimited” off-road modes (note: after agreeing to a disclosure statement). Above level 2, the Brooklyn will accelerate up to 28 miles an hour.

Riding downtown from my place in the burbs, I put in several hours of mixed-use riding; sipping the electrons by pedaling on level 1, cheating up hills on level 2 with the occasional shot of throttle, along with a few miles of full-tilt hooliganism. After 46 miles I returned home with the display indicating 9 miles left in the “tank”. SUPER73 says their 960-watt-hour battery offers 40 miles of range on level 2, and 75 miles or more on level 1. My ham-fists enjoy the throttle too much to stretch the Brooklyn to 75 miles, albeit I firmly believe it’s achievable if you’re disciplined enough. However, I have on good authority it’ll absolutely cover 20 miles full wide open, just in case you were wondering.

Standing up on the bike, huffing uphill on level 1, it befalls me that the ergonomics of the SUPER73 feel more intended for sitting; fortunately, the long seat is comfortable. Assaulting Dayton’s seasoned roadways, the suspension makes for a plush ride; perhaps not the luxuriousness of my KTM enduro, but leaps and bounds from my old Huffy.

For me, peak fun factor on the Brooklyn is carving up the bends at full throttle, throwing a leg, and resisting the urge to tap the brakes. Navigating city traffic I found myself thankful for electric assist, even more on the final ascent out of the river valley on the rides home. As a motorcyclist, legal residential speeds feel considerably swift on the 80-pound Brooklyn. It’s also evident that the motor programmer is walking the razor’s edge of preserving the battery while maximizing smiles per mile.

Riding the Brooklyn around town, it doesn’t feel like a bicycle nor motorcycle. To maintain a range that supports urban commuting, the hub motor isn’t pulling dank whoolies without a little body English. Still, this isn’t your granddaddy’s Schwinn; it effortlessly jumps a curb, pulls savage stoppies, and spurs questions from each passerby. Surfing the novice trails at the local off-road park, the Brooklyn’s adept and fun, but as the soil gets loose the fat street tires get a bit twitchy, and when the hills get steep the Brooklyn reminds you it’s no enduro motorcycle. Snacking outside the local chicken joint, eying that familiar tire tread pattern, it dawns on me, the Brooklyn’s a BMX bike smashed into a supermoto.

Considering the increasing regulations pressuring local motorcycle tracks, electric bikes are offering a silent alternative for enthusiasts. Practicing front yard dirt bike pivot turns tends to draw glares from my neighbours, whereas riding e-bike wheelies down the cal-de-sac leaves them in oblivious bliss. This is where the Brooklyn really shines, it’ll commute with the rest of the e-bike market, but somewhere behind those brash cafe racer looks, it mischievously entices you to hoon around. With more traditional motorcycle venues disappearing, I think SUPER73 has opened the door to new forms of two-wheeled competition that are much less likely to draw ire from metropolitan residents. Until then, I’m content to assault the city streets on the fat tire super-e-moto. 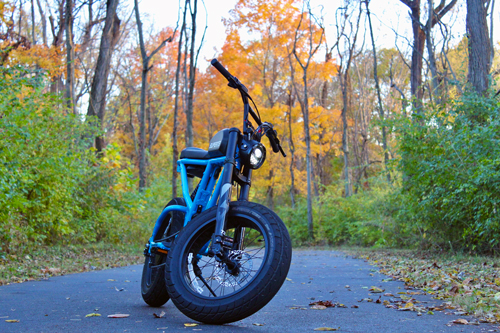 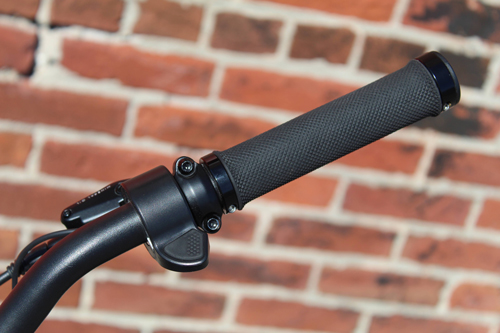 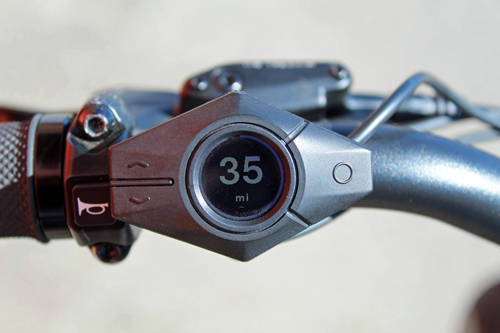 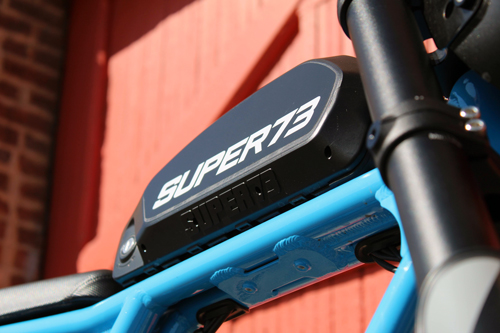 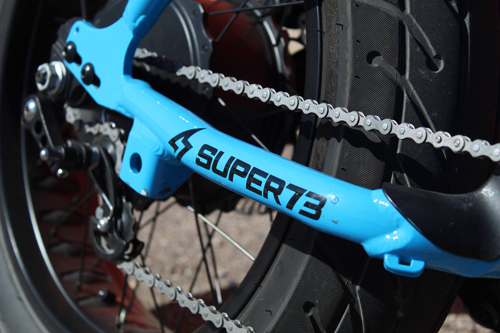 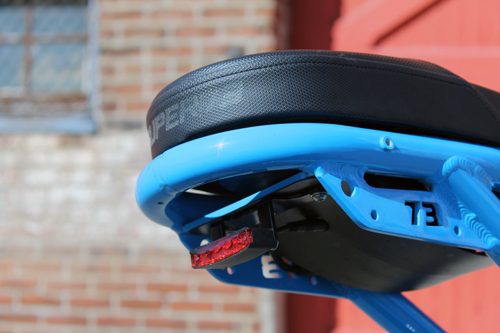 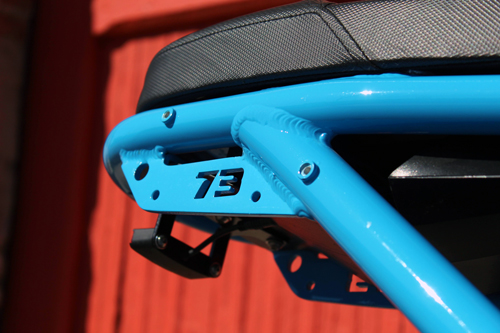 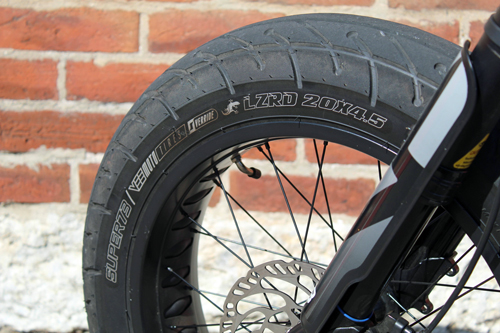 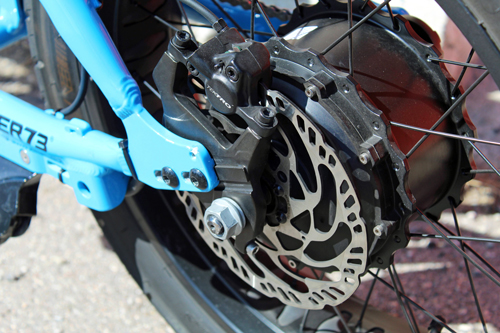 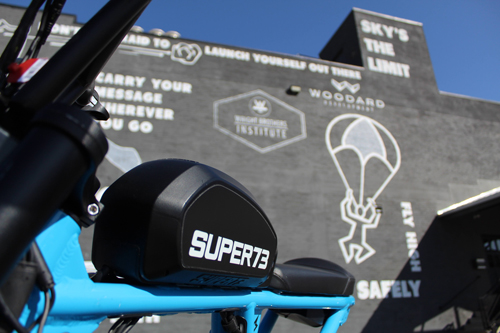