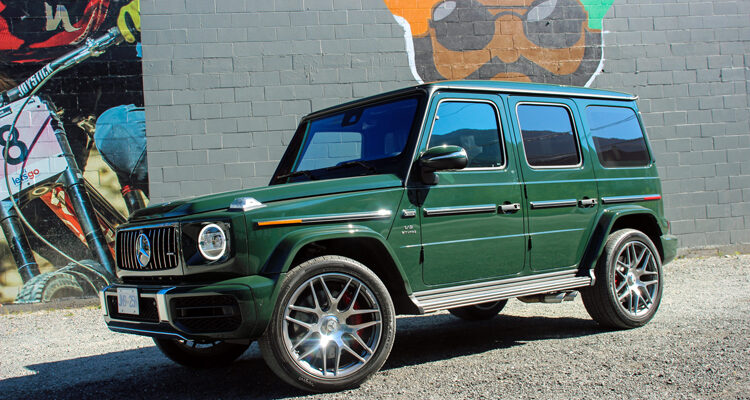 Quick show of hands: which vehicle is the mainstay for Canada’s military? The Hummer? Nope. Willys MB Jeep? Very funny – but nope. Horse? Closer, but wrong again. Indeed, the vehicle keeping our troops safe in conflict zones is none other than the latest, militarized version of the Mercedes Geländewagen, or “terrain vehicle”. More colloquially, you know it as the G-Class, that military jeep-turned-star car that has been famously owned by folks ranging from the rapper Birdman to former California Governor Schwarzenegger. Although his was converted to electric power, which means he’s ahead of even Mercedes in that department as they could very well be working on an electrified version of their own.

The AMG G 63 you see here, of course, is about as far away from the military version (or, indeed, Ahh-nold’s electric version) as you can get when it comes to the G-Class. The huge 22-inch wheels wrapped in Pirelli Scorpion Zero rubber, bright red brake calipers with “AMG” plastered all over them, twin side-exit exhausts on both sides, dark almost limo-tint side windows and silvery bash guards underneath – all of it screams “civilian spec”. It looks darn good and turned heads everywhere I went. Indeed, if The Hulk were a car, this would probably be it.

Inside, it’s more of the same, but before you get in, you have to unlock it of course and the sound those locks make when you plip the fob is unlike anything you’ve ever seen from a car before – normally, we talk about a car’s gearchange action sounding like a rifle bolt; with the G-Class, it’s the locks that recall that noise and it is loud. The lights will flash when you plip the lock, but they don’t need to; you can hear those darn locks clicking into action from a block away. Just be sure you give those doors a firm thrust when closing in order to ensure those hefty locks reach their latches in the first place.

Open the very workman like Jeep Wrangler-esque doors and you’re greeted with patented Mercedes luxury but with a bit of a twist. You see, my tester’s Black Fiddleback (yeah, I don’t know, either) open-pore leather comes as part of the “G manufaktur.” line that offers a number of interior finishes specific to the G-Class. The exterior paint, as it happens, is also part of that line. Indeed, the black-brown leather looks fantastic and is a great compliment to the exterior paint.

Otherwise, it’s modern-Benz business as usual in here; all-digital modifiable gauge cluster and infotainment screen, vent roundels, analogue clock at the center of it all, steering wheel with more buttons than the Texas Instruments you had in high school and centralized touch-pad controller. It’s all very chic, very modern and the way you can access the gauge cluster menus with a thumbpad on the left wheel spoke and the infotainment display (including Apple CarPlay) with a matching button on the right-hand spoke is a good way of doing things, once you get used to it.

There are some things, however, that are a little tougher to get used to.

It should come as no surprise that headroom is ample – just look at how tall that roof is! – but legroom both front and back isn’t exactly ample for such a large vehicle because you sit so upright and are surrounded by upright panels all over. I never quite freed my right knee from having to be pressed firmly against the lower dash. The placement of the interior door pull never felt natural, either; it’s too far back on the door panel and too close to the leg, forcing users to contort their wrists in a somewhat uncomfortable way to release it.

The same goes for the rear cargo area, as it is yet another example of space lost due to having to pack all that running gear as high up as possible to achieve the necessary ground clearance for what is a proper off-road vehicle. The rear cargo area also bumps up against a raised leading edge, so there’s no flat load floor if you drop the seats. It does have a barn door-style tailgate, though, and unlike the Land Rover Defender, it swings the proper way for typical North American curbside parking; left towards the road as opposed to right against the sidewalk.

What that upright seating position and cockpit does provide, however, is a great view out and thanks to the squared off corners, moving through town in the G 63 – which is where most G 63s are going to be spending the bulk of their time – is unexpectedly easy considering the bulk of the package. The surprisingly short wheelbase also helps; at 2,890 mm, the G 63’s wheelbase measures 245 mm shorter than its GLS 63 sibling. So, that means this hulk of an SUV is not even the biggest in its own line-up.

It really is the hulkiest, though. It starts with the engine – a twin-turbo (or “biturbo”, to use Mercedes parlance) four-litre V8 good for 577 horsepower and 627 pound-feet of torque. Yes, that’s less hp than that GLS 63 but equal torque and it’s lighter. It should come as little surprise, then, that the G 63 will haul you-know-what down the highway when you put your foot down. The image in your mind as you do it – this tall, somewhat gangly army truck in civvies bouncing down the highway, passing all traffic like it’s stopped traffic – will bring a smile to one’s face, every time. As will the noise – those pipes are loud and can be made louder with the press of a button or by selecting one of the more aggressive drive modes. At which point that same button can be used to soften the exhaust note, but won’t modify the throttle, suspension and transmission settings the drive modes play with. 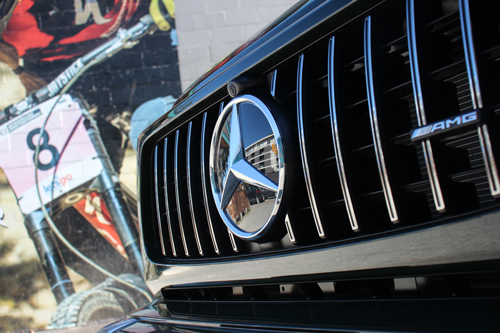 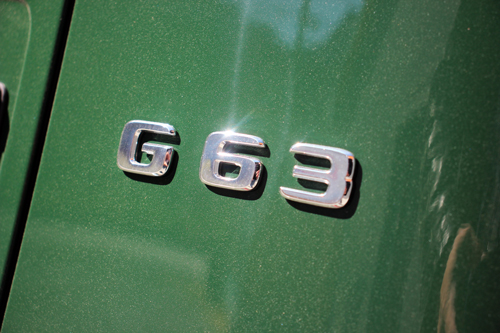 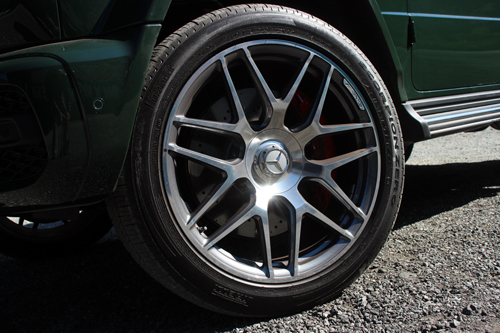 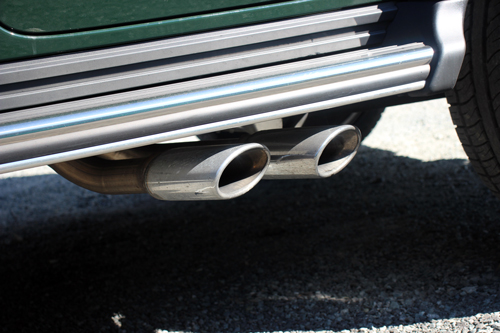 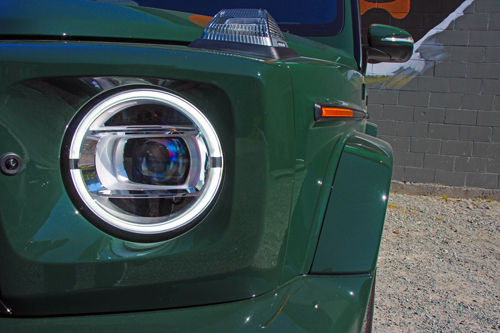 While like The Hulk made his name in the comics and that image described earlier is a somewhat comical one, the G 63 is no joke. Especially when we talk about its off-road chops, which are top of the pops right up there with the Defenders, 4Runners and Wranglers (and Broncos) of the world. There are three separate locking differentials – remember than innovation we hinted at earlier? Well, the G-Class is one of the only vehicles out there with that feature – and 217 mm of ground clearance so it can clamber up and through anything. I’ve had the opportunity to really put both the G 63 and its lesser-endowed G 550 sibling through narrow off-road tracks normally reserved for ATVs and with its short wheelbase, super short front and rear overhangs and great view out, it was a remarkable joy to pilot in those circumstances. Sure; we had to play with the diffs – they’re activated by three individual buttons right there on the dash – in order to make some of the sharper hairpins, but once down, there was no stopping the G 63. 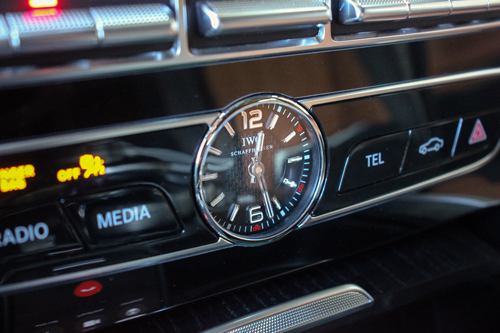 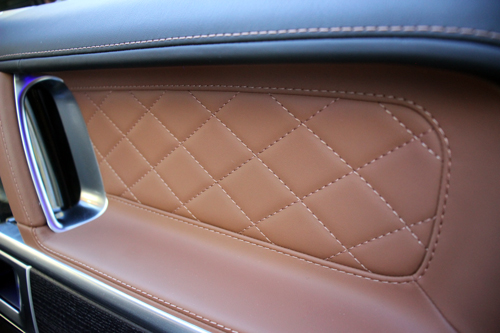 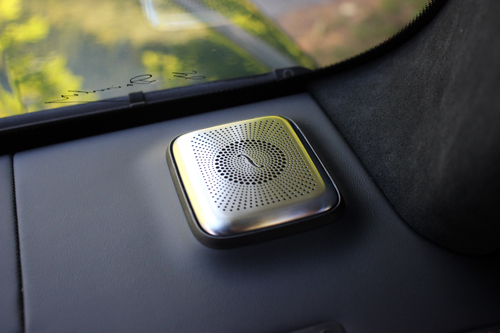 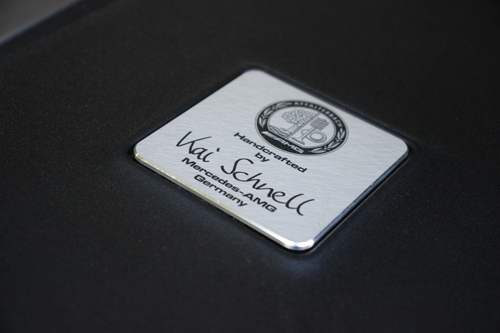 What’s truly remarkable, though, is actually how it handles itself on the beaten path, as opposed to off it. Indeed, you knew it would be good off-road but it takes corners with surprisingly minimal body lean for such a tall vehicle. That’s the adjustable-dampers and strut tower brace at work, and I never quite got past the feeling that this was a properly jeepish non-Jeep that performed much better on the road than it should. Maybe the bad guy in The Bourne Supremacy was on to something when he decided to chase Jason Bourne down in a G…

That’s the G-Class in a nutshell, really. It’s an icon of many stripes – military icon, rap icon, pop culture icon – and, soon, possibly an EV off-road icon as an EQ battery-electric version is reportedly not that far off.

Pretty good for a vehicle that started life as a humble civil servant over four decades ago.