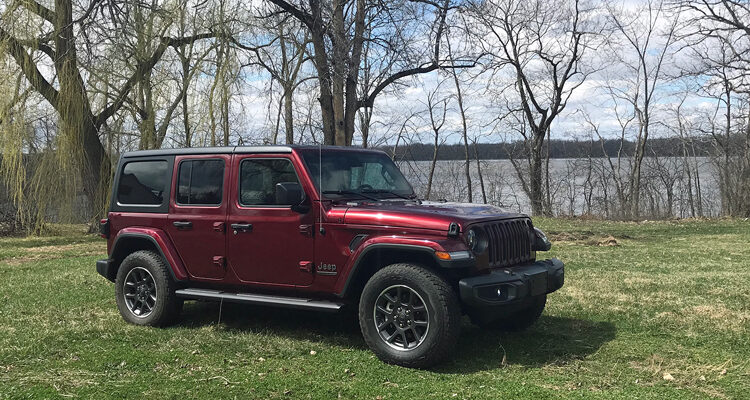 To celebrate eight decades of the Wrangler, Jeep introduced a special edition for the 2021 model year.

It’s a bit of a long name, so bear with me as I introduce this week’s tester, the 2021 Jeep Wrangler Unlimited Sport S 80th Anniversary. What is special about this edition is the addition of things like a three-piece black hardtop, 18-inch wheels with Granite Crystal finish and commemorative exterior badging.

While the Unlimited Sport S has a starting price of $45,465, our tester was equipped with a lengthy list of options – not sure I can recall a longer list, in fact – that push the final cost to $62,030.

All that builds upon an already solid list of standard features in the body-on-frame Wrangler that includes blind-spot monitoring and rear cross path detection, adaptive cruise control and forward collision warning.

Exterior: I don’t think the Jeep Wrangler’s styling needs much explanation. It’s iconic and remains that way for the 2021 year with features like the round headlights, seven-slot keystone grille, trapezoid wheel flares and removable doors.

The tester was in a snazzy colour, too: Snazzberry Pearl (a shade of red), which is well worth the $195 charge.

A few additional touches to the exterior are in nice contrast to the paint: black Mopar tubular side steps ($800) and Mopar fuel-filler door ($200)

Interior: The cabin is also very much what Jeep Wrangler lovers have come expect from the model.

It’s a utilitarian yet comfortable space, with the creature comforts of all modern vehicles rolled into a familiar look.

All the controls – including the power window buttons – are neatly housed in the centre stack, and key dials are large and feature nice grips for ease of use.

The tester features black cloth seats with 80th Anniversary tags, but don’t look for any power options as the front seats are manual only. But they, and the steering wheel, are heated!

The rear seats offer fairly good leg room but did feel a bit stiff when compared with the comfortable front seats. And the back folds down flat to deliver excellent storage capability in the Wrangler. That being said, even with those seats occupied, the Wrangler delivers the goods in terms of cargo, with plenty of tie-down hooks in the compartment as well.

Infotainment: Our tester came with the larger of two available infotainment screens. While the base in Sport is a 5.0-inch monitor, I experienced the fourth generation Uconnect system through an 8.4-inch display, which included navigation, satellite radio and pinch-and-zoom capability.

The system is also compatible with Apple CarPlay and Android Auto.

Fitted with the Alpine premium audio system, the sound quality out of the speakers is excellent.

Overall, the system functions well and is easy to navigate, with clear menus and a good response time.

Powertrain: While you may be expecting some sort of growling V6 under the Wrangler’s bonnet, that’s not the case with our tester.

But don’t think for a moment that 2.0-litre inline 4-cylinder turbocharged engine is a slouch with an output of 270 horsepower and 295 ft-lb of torque. Those are still good numbers and while it has less horsepower than the larger V6, the turbo engine delivers significantly more torque.

The Wrangler has a choice of two transmissions, either a 6-speed manual or the 8-speed TorqueFlite automatic transmission on our tester. While it does an excellent job, it has a hefty price tag of $1,795, so my choice would have been to opt for the manual gearbox.

Other powertrain options on the tester include a 2.72:1 Selec-Trac full-time 4WD system ($795) and a Trac-Lok limited-slip rear differential ($525).

According to Jeep, the Wrangler 4 cylinder has an estimated fuel economy combined average of 10.8 litres per 100 kilometres, but I did no better than 13.7 L/100 km. 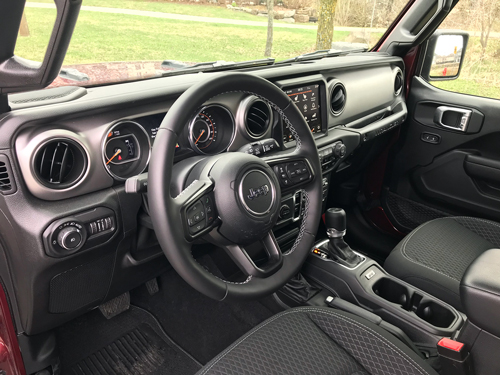 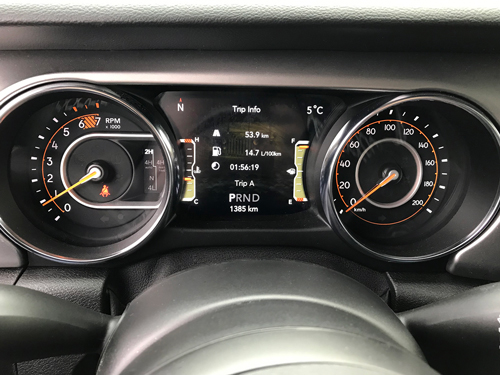 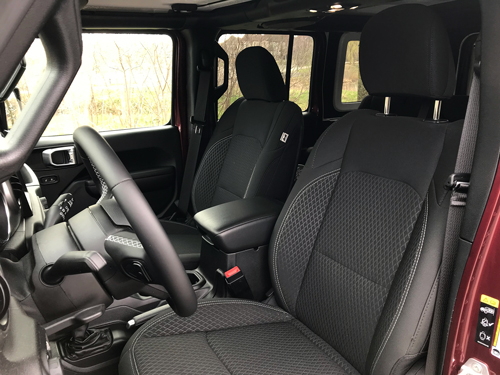 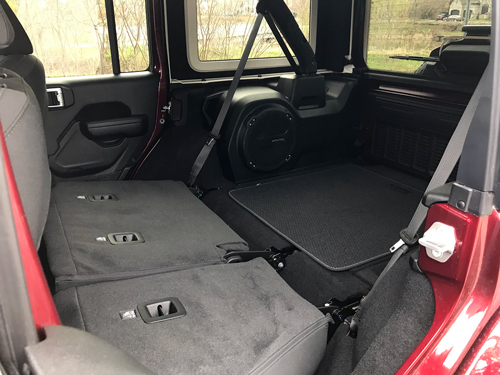 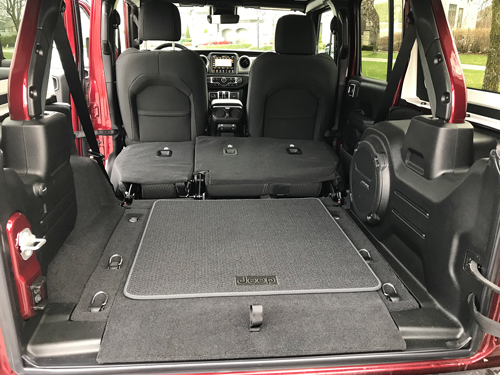 Drive: Being a Wrangler, the ride can get a bit bumpy at times, but it never feels unstable.

Once you get used to the fact the engine noise is more of a whine than a throaty roar, you will come to appreciate the effectiveness of the 4-cylinder turbo. Reaction time is excellent, and it delivers the goods when and where it’s needed.

The Wrangler ensures you have what you need to go off-road with items like electronic stability and traction control, electronic roll mitigation, hill start assist and trailer sway control for those using it for hauling.

And to protect key parts when on rougher terrain, it comes with skid plates for the transmission, fuel tank and transfer case.

In the off chance you get stuck with a Wrangler – I know, it’s not supposed to happen! – it comes with black tow hooks (two front and one rear).

The ride and drive attributes are what one would expect from a Wrangler. Solid and sure footed over the roughest of terrains, while also comfortable enough as an everyday city driver, despite some bumps along the road.

Conclusion: If the Wrangler has survived for 80 years, it’s not by sheer luck. The model has proven itself capable in a variety of roles and has earned a loyal following.

While new competitors are taking direct aim at the Wrangler’s turf, those models likely have a long road ahead of them to convince the most passionate Jeep fans to switch allegiances. 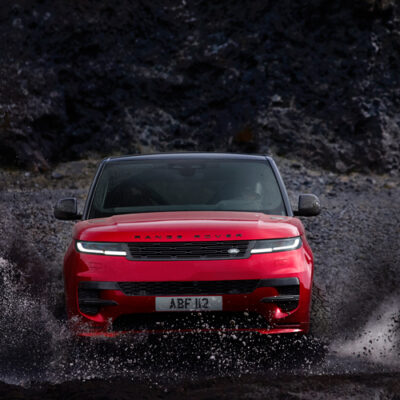