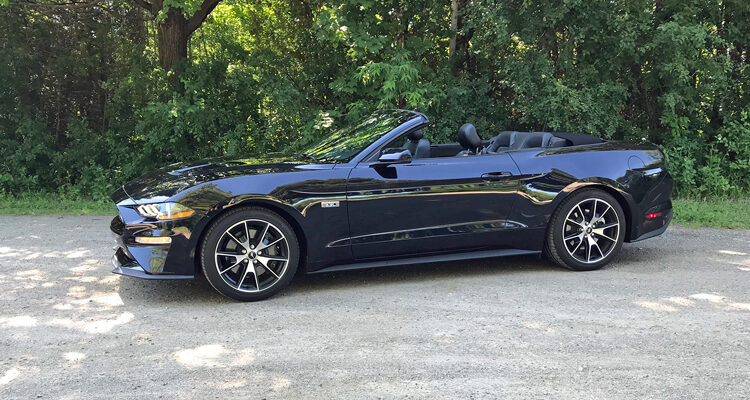 It may not be as loud or bold as the 2021 Ford Mustang GT Convertible Premium I tested a few weeks back, but do not hold that against it.

We are talking here about the 2021 Mustang EcoBoost Convertible Premium, which will cost you a fair amount less but is still very much a fun Mustang. Oh, and it can get loud, too.

The EcoBoost version has a starting price under $40,000, but that is without the high-performance engine in our tester, which pushes the starting price to $43,370. As tested, though, the Antimatter Blue Mustang in the driveway totalled $56,970 – which narrows the gap significantly with the $63,440 price of the GT we drove.

Of the nearly $12,000 in optional equipment, it features package 201A (catchy name, eh?) that adds a 12-inch digital instrument cluster, heated steering wheel, navigation, adaptive cruise control and a bunch of nice finishing touches on the interior such as accent stitching on the centre console lid, premium floormats with accent stitch; colour-accented leather-trimmed seats; and Linked Graphite aluminum instrument panel.

There’s also an extra grand added for a premium sound system with 12 speakers.

Powertrain: The rear-wheel drive Mustang EcoBoost Convertible Premium I drove had an upgrade to the engine Ford designates as the High Performance EcoBoost engine, which ups the available horsepower from 310 to 330.

The torque output remains the same, however, at 350 lb-ft.

And while not as loud as the GT, the engine still makes its presence known to those around you, although you can tone it down through a control on the steering wheel.

Having experienced the manual gearbox on the GT, it was nice to get a feel for the optional 10-speed automatic offered on the Mustang EcoBoost. While certainly not as fun as having the full control of a manual, this transmission is a pretty solid alternative. Although I did find some the shifts a little rougher than I would have liked. Personally, I would take the manual over an automatic every day of the week.

Ford claims that the EcoBoost engine has a fuel economy average of 10.3 litres per 100 kilometres, mine worked out to 13.4 L/100 km, but there was a fair bit of city driving in there.

Exterior: Regardless of what is under the hood, the Mustang’s styling remains a bright spot.

Like the GT, this version also has the Mustang logo moved off centre thanks to one of the optional packages, a look I prefer to having it right in the middle of the grille. 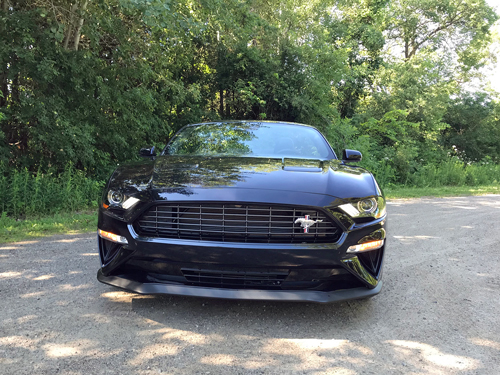 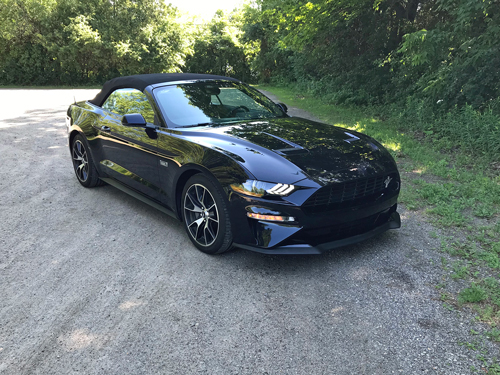 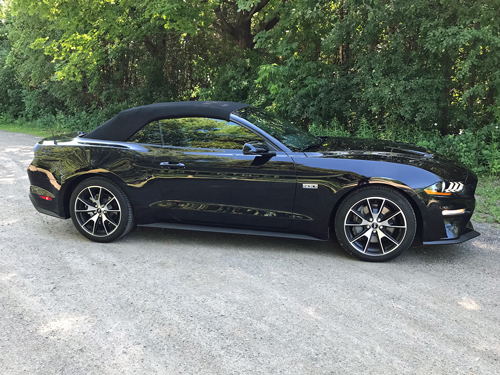 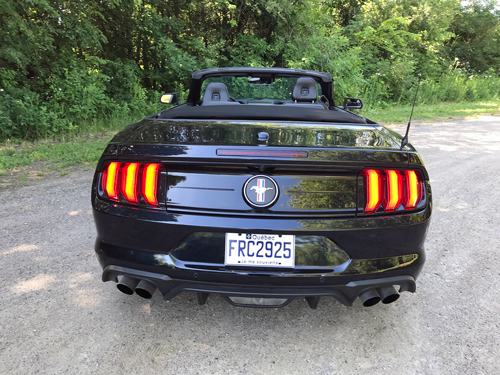 The triple taillight design and matching trio of lines in the headlights also adds a sense of symmetry from front to back.

Top up or down, the Mustang design is still one of my favourites on the market right now.

Interior: With room for four occupants, the Mustang may not be the ideal family vehicle, but you will be hard pressed to find one that is better at putting a smile on everyone’s face.

The cabin of our ride was nicely appointed thanks to accent stitching and the graphite inserts on the dash.

The seats are supportive and comfortable, although rearward access and legroom is a tight squeeze – especially with the top up.

I very much enjoyed the 12-inch digital gauge cluster, especially the way the RPM gauge is set up – almost like a candy cane shape from left to right.

With a nine-speaker audio setup as standard, I experienced the optional Bang & Olufsen 12-speaker system, which also includes a subwoofer and offers excellent sound output.

Like in the GT, the infotainment’s interface could use an update, but it’s still an overall decent system to use. 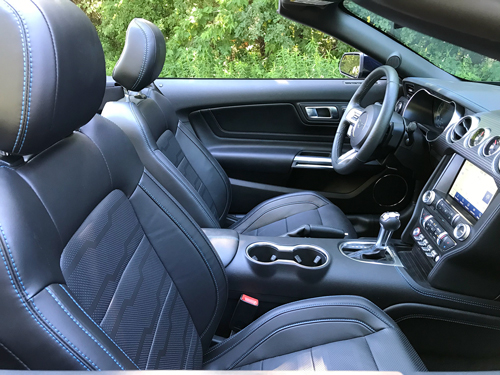 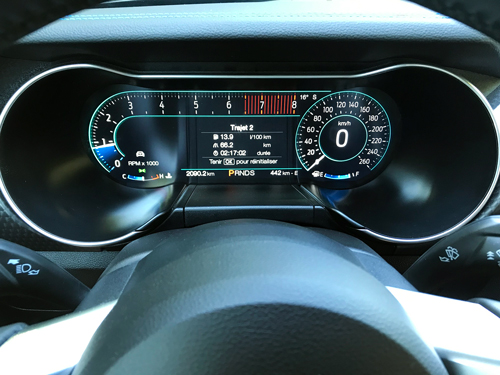 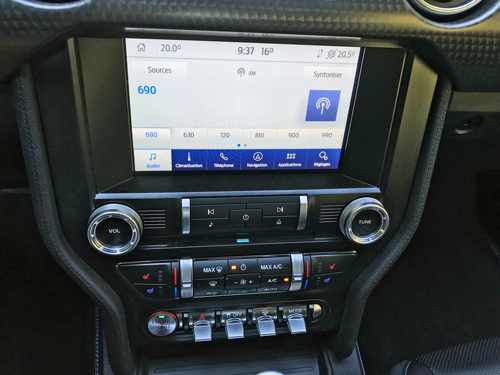 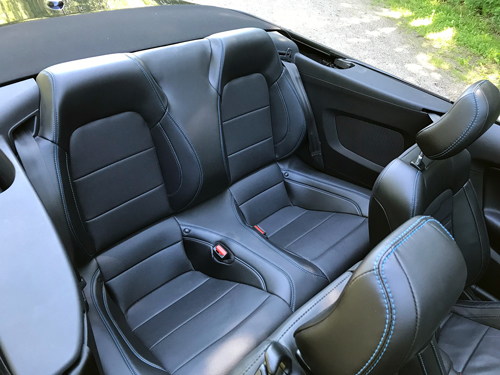 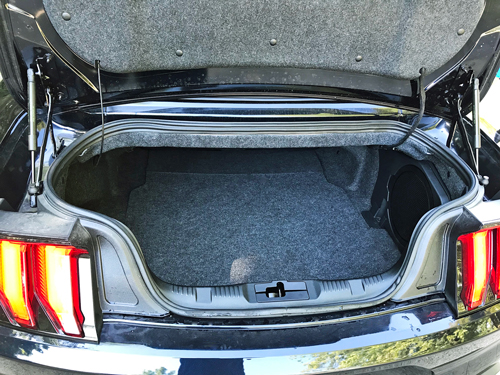 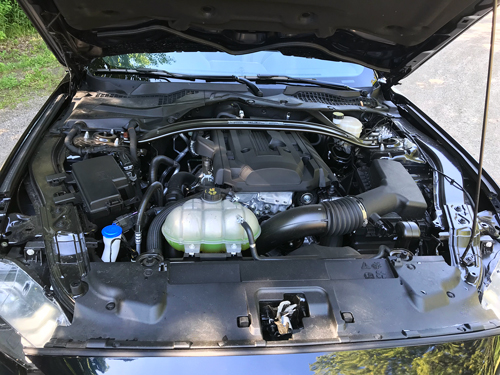 Drive: While definitely offering a lot less power than the GT, the EcoBoost Mustang, especially this high-performance version, still delivers a fun drive.

Thanks to all that torque, it can get moving in a hurry, even in normal mode, but you can take things up a notch in Sport or Sport+ modes (there’s also a track mode on offer).

The engine delivers excellent performance throughout the power band, and despite some small hiccups, the transmission gets the job done quite well.

The ride is, predictably, a little bumpy, but it’s nothing that can’t easily be overlooked given the Mustang’s other qualities.

Conclusion: Those looking for a traditional Mustang experience – rather than the electrified variant – will be well served by this version of the iconic model.

The vehicle looks great, which is no surprise, has a good passenger cabin and still delivers a good enough kick in the pants when out on the open road to keep driving enthusiasts entertained.