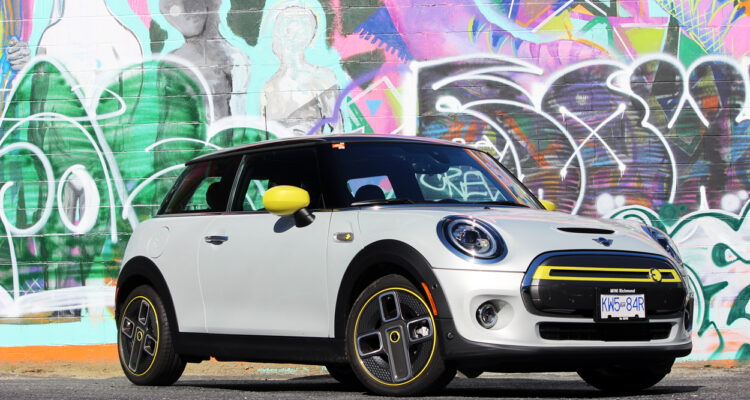 After what’s essentially been a 12-year gestation period, a fully-electrified Mini is ready for the open market. Yes, in 2007, there was a Mini Electric development vehicle that saw very limited use among some people that applied to give it a try; they were given short term leases – say one or two years – and Mini used the experience they had to build a more widely-offered vehicle.

Fast-forward to 2017, and the first fruits of that plan came to bear in the form of the Mini Countryman E plug-in hybrid (PHEV). It’s done well to the point where 18 per cent of all Countrymans sold worldwide are of the E variety. It could be argued, though, that the Countryman E was a bit of a step backward in that it still required the use of a gas engine, while the “original” electrified Mini was a full-EV.

Which brings us to the scene here: the 2020 Mini Cooper SE, a fully-electrified Mini that’s available to anyone, worldwide, in Mini dealers alongside more traditional Minis such as the Cooper S and Clubman. Available as a three-door and a three-door only, it takes all the lessons learned from the Mini Electric, the Countryman E and yes, the BMW i3, who has donated a flipped-around version of its EV battery and motor since it runs as a rear-wheel-drive car, while the Cooper SE is a front-wheel drive car.

You can tell that the Cooper SE is something a little…different but it’s not so obvious that it might deter those buyers that might want to drive an EV, but not necessarily look so obvious in doing so. The situation changes a little once you get to the upper of three trim levels, though, where one of the standard wheel options is probably the most space-agey styles you’ve ever seen on the showroom floor. It seems that even Mini may be a little more self-conscious about them; when the Cooper SE was shown at Montreal (a show in the biggest city in a province that loves its EVs), it didn’t have those wheels on. I know I would never have predicted these to make production, what with their three-spoke-plus-1-hub/spoke combo that reminds of the Penrose stairs optical illusion and three-colour treatment. They’re wild for sure, but can be switched to a number of other styles for no charge at all.

The next most obvious styling touch is the ultra low-profile grille; when you’re an EV without an engine to cool, you don’t need a big hole breaking up the front fascia. Instead, you get a nice, clean look with a stylish neon line bisecting it. That yellow is repeated elsewhere, but in a much more subtle fashion: the “S” on the fender and trunk badging, for example. Or the “E” on the floormats, and some flourishes inside, not to mention the charge cable, which is – you guessed it – finished in bright yellow. Thing is, Minis have always had crazy, flary add-ons that you could do, whether it be Union Jacks on the wing mirror caps or checkered flag appliqués on the front fenders, so the SE is in good company in this regard.

In truth, it’s actually the perfect transition to “e” status. You can tell it’s got a little something going on, but you’re not being yelled at about it and instead, you’re left with a very cool take on what is already a very cool car. I’m a fan of what they’ve done with the exterior styling, somehow managing to re-modernize the Mini shape yet again.

Inside, meanwhile, the 5.5” fully-digitized gauge cluster that comes as standard is unique to the SE and recalls the item found on the i3. It’s nice and low-profile, providing some airiness to the cabin. Which, of course, is good because as is the case with other Minis, it can get a little cramped inside.

You can’t blame any of that on the added battery required by the 32.6 kWh T-shaped battery mounted in the floor, though; thanks to the SE having a slightly higher ride height than a standard Cooper, the battery can drop a little lower down, thereby leaving interior passenger space and cargo room unaffected. There is 211L with the rear seats up and 731L once you drop them down. And, since the battery adds weight, the centre of gravity is actually lower – by 30 mm – than it is in the standard Cooper.

That should mean a fun, agile handling package with small body roll. The steering is direct, and while left-to-right body roll is something you need to worry more about in turns, the back-and-forth movement of a car’s body in traffic matters on the day-to-day. We saw plenty of that during our drive, and the SE impressed by keeping everything copasetic here, making sure our heads stayed comfortably against the headrests and not wobbling forth and back like a bobblehead.

Pressing the throttle, meanwhile, especially in the more aggressive of the four drive modes (Green+, Green, Mid and Sport) will push your back against the seat; a single-speed direct drive transmission means immediate delivery of the SE’s 184 hp and 199 lb-ft of torque and some properly zippy forward progress. It’s darn fast, this – about the same as a standard Cooper S — and I’d love to see it go up against one of its traditionally-powered siblings in a drag race. Maybe one day I’ll get the chance but for now, I just know that this is definitely not slow.

You’ll slow down quick too, though, especially if you’re running in the more aggressive of the two regenerative braking modes. In those modes you’ll slow down from your average city speed in short order. That being said: it’s not quite as effective as the one-pedal driving in either the Nissan Leaf Plus or Chevrolet Bolt; on anything but uphill stops, I found the SE almost always required some brake application in order to come to a full stop. Once there, it stays in place without having to rest your foot on the brake. Still, though; it’s a mode that should be reserved for stop-and-go situations and there was a noticeable improvement in range once we switched to the more regenerative mode. It’s a range, meanwhile, that’s rated at 235-270 km on the European scale, but 177 km in Canada which uses a stricter ratings system. That’s a bit of a problem because it means the SE returns less range than the e-Golf or the Chevy Bolt. The challenge in Canada, of course, is that so many of our cars spend their time in adverse conditions that will hurt the range of EV cars.

It’s good, then, that the SE comes standard with both standard and DC fast-charge capability, with the later returning power from 0-80 per cent in about 35 minutes. A fast-charger will also be able to be installed at your home for about a $1,350 + installation charge premium over the cost of the SE – which starts at $39,990 before the various government rebates for EVs are applied. That’s for the base “Classic” line; the mid-range Premier Line trim comes in at $44,990 and adds 17” alloys (up from 16”), panoramic sunroof, Harman Kardon audio, power-folding side mirror and rear park-distance control. The top-spec Premier+ Line, meanwhile, tops out at $47,990 and adds a larger touchscreen display (from 6” to 8.8”), heads-up display, wireless charging, leather upholstery, and of course, those wheels. 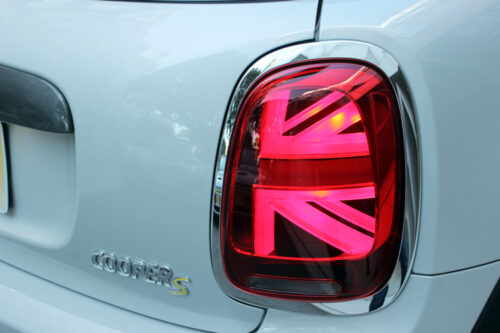 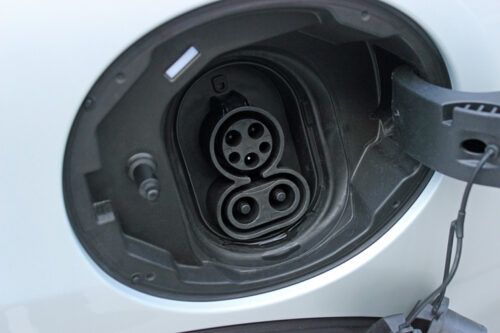 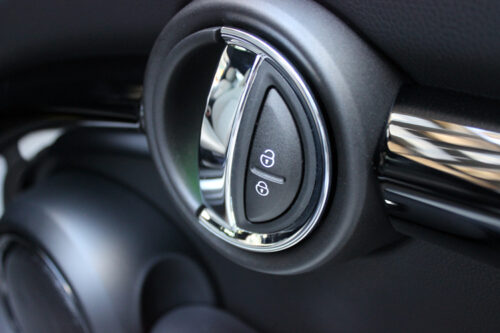 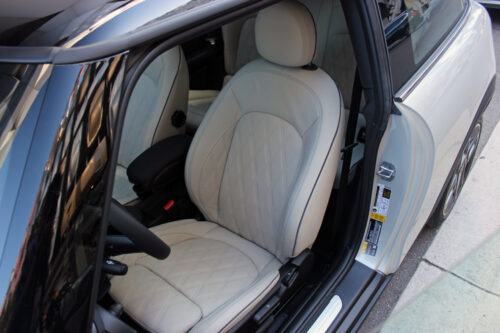 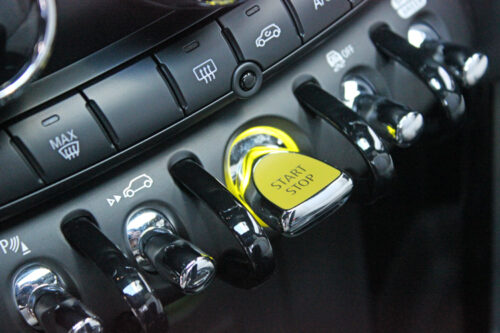 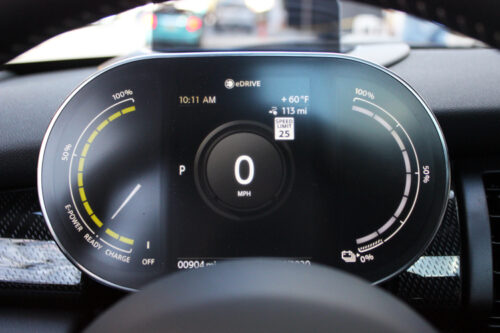 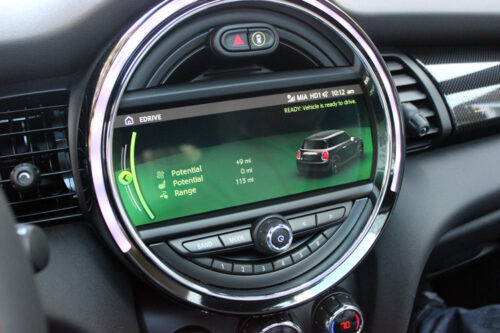 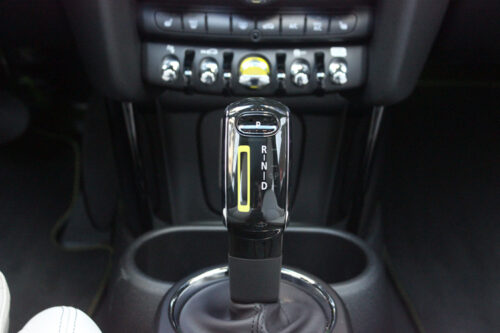 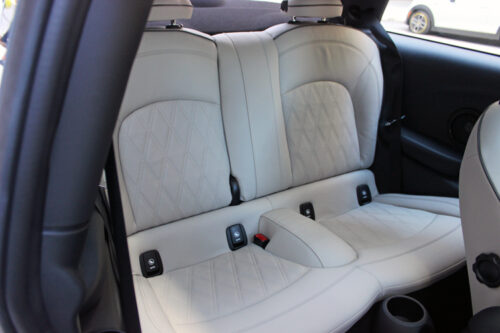 That aside, the Cooper SE is a strong entry into the Mini line-up, and it’s also a strong entry into the EV market – under the right circumstances. The regen system works well and if you are in a climate that allows you to better meet those European numbers. Of course, if you’re going to be doing most of your driving in urban centres then that range becomes less of an issue, especially if you’re close to a charge station. In the end, of course, all that’s a little bit secondary in that when you think about it, the Mini was always going to need an electrified version; it’s a trendy car with a youngish buyer base and more and more, said base is looking to EVs. This was always the next frontier for the Mini, and it’s crossed that threshold in good form. Yes, more range would have been welcome and if you read the tea leaves, that could very well be the case as we continue down the SE road. For now, it’s time to enjoy the much-awaited rival of the latest star on the Mini horizon.