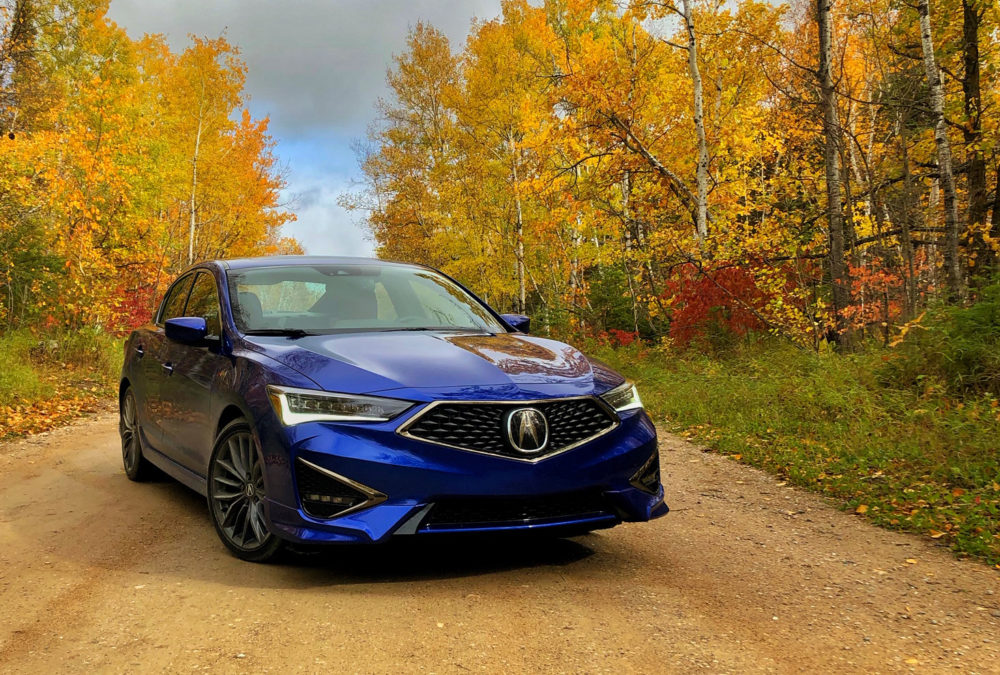 The 2020 Acura ILX is the latest, perhaps the best, example of how far Japan’s three automakers — Honda, Toyota, Nissan — have taken their luxury offshoots.

In many instances, early products of the brands Acura, Lexus and Infiniti represented only minor improvements over the badge-engineering days of North American manufacturers, where identical cars would get minor alterations and spring forth pretending to be distinct vehicles. In some cases, the Japanese badge engineering was even less transparent.

Such was the case with a predecessor to today’s subject, the Acura ILX. Back then, the Honda Civic version wearing the Acura badge, the EL, made little effort to do more than swap out a nameplate. If you saw an EL and didn’t look too closely at some of the added features, you could be forgiven for thinking, “Nice Civic, dude.”

Worse, the EL came about after the demise of what may still be the coolest, affordable Acura: the Integra.

That was then… Today, the Acura ILX bears little resemblance to the Honda Civic. Similar overall dimensions, but it has vastly improved exterior styling and a unique interior, as well as a powertrain that shares no similarity to any Civic.

The most notable change in the powertrain is the complete absence of anything resembling a continuously variable transmission. In its place is an eight-speed dual-clutch transmission that is  a significant upgrade over any CVT. It is also, perhaps, the smoothest dual-clutch this side of a Porsche PDK.

Unlike the Civic, however, there is no hi-pot version of the ILX. All models, including the top-of-the-line Tech A-Spec model tested, get the same powertrain.

Emile Korkor, assistant vice-president, Acura Canada, acknowledged how Acura’s philosophy has evolved into creating greater differentiation between similar Honda and Acura models. “Yes, as the luxury performance division of Honda, the development strategy of Acura products ensures we focus on the core DNA of which the brand was born,” he said. “Performance, premium materials and refinement are all emphasized in these models.”

He said ILX is a strong conquest model for Acura, as well. “We see a good inflow of customers stepping into an Acura from the mainstream brands you mentioned, and this has always been our mission with ILX. Sixty per cent of our customers come from other brands.”

I would say the main difference in driving dynamics between Civic and ILX is expressed in the transmission. While there are no manual transmission models available in any current Acura model, the eight-speed dual-clutch provides a much sportier takeoff and shifting experience than any CVT, the only style of shifts-itself transmission available on Civic. If you want a similar engine with Honda’s legendary manual transmission, your only option is a Civic Si or Civic Type R. The Si overlaps the ILX pricing at a tick more than $32,000, while the Type R rockets towards the top of ILX pricing at $48,000.

If improvements were needed anywhere in the ILX, it’s the sound-system user interface. Honda is wise to add an actual volume knob to some of its models (should be all of them), but the touchscreen is small and so too are the “buttons.” It requires full concentration — and eyes diverted from the roadway — to operate, and it’s too easy to select the wrong function and then have to go back and do it all over again. However, once you do have all your presets set, the steering wheel controls are easy to understand. While the screen is fumbly, the voice-recognition system can be used to adjust the audio system, such as changing channels or selecting a different source. 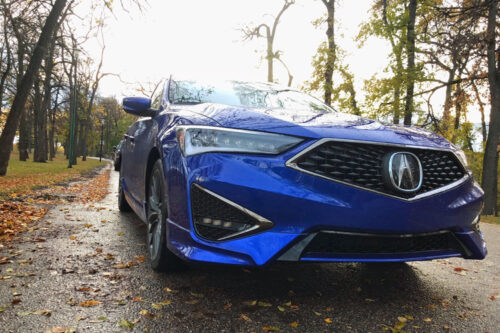 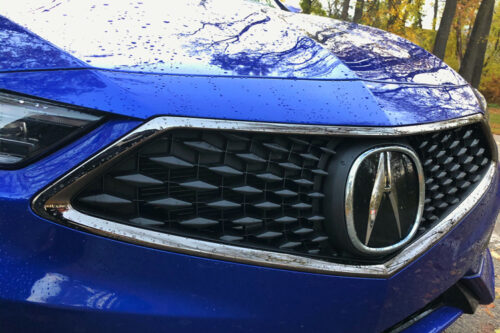 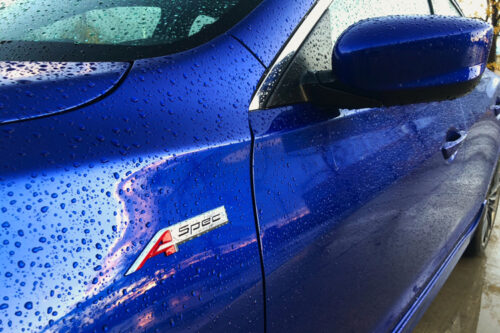 Korkor said despite Honda’s success with the Civic Coupe, there are no plans for a coupe in the Acura fold. “I loved the Integra. Our past design language is making a big return in our future in products with lower and wider stance and dynamic proportions,” he said. “I believe we can achieve a stunning and sporty design in a four-door configuration easily if we stick to this formula.

“As for a coupe, it’s always been a difficult decision whether to invest in development of this body type because the market for them is so small, however, I wouldn’t count anything out. It’s just not in the plans today.”

Since its inception, Acura has been committed to front-wheel drive, even though many current models feature all-wheel drive. The company has, therefore, become very adept at developing front-drivers that handle extremely well. The ILX is no exception. Push it hard into a corner and it feels as balanced and predictable as a rear-driver. Want the tail to dance? Lift the throttle slightly when you’re hard into a corner and it will. If you catch it in time, the stability control will let you get away with it, too.

At the corner exit, press on the throttle and feel the engine pull strongly up to speed, particularly with the transmission set to Sport. For a car that starts at just more than $30,000, it’s a whole lot of driving fun for the money. The best part is you get most of the fun bits even at the base price. Heated front seats, 10-way power driver’s seat, remote engine start, steering-wheel shift paddles and adaptive cruise are among the standard features. 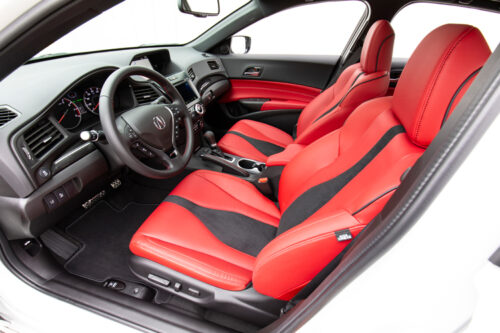 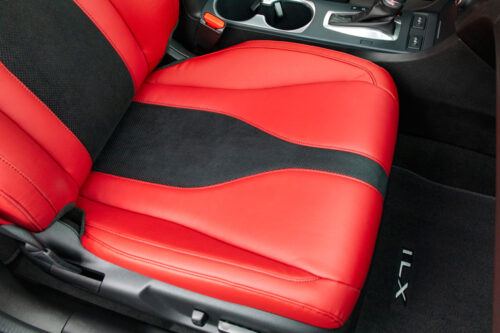 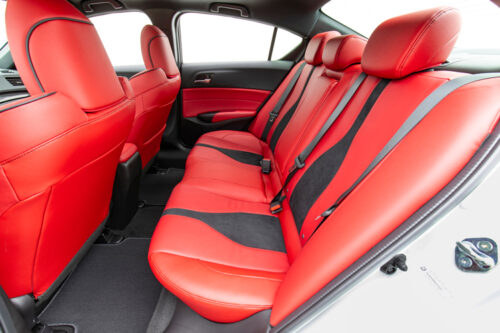 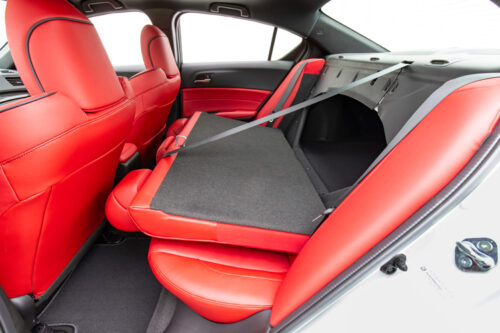 Upgrading to the Tech A-Spec ($38,085) gets you ultrasuede seating, a premium ELS sound system including 10 speakers, voice-activated navigation and 18-inch dark-finish alloy wheels. For pure driving joy, stick with the base model. If you like toys, the Tech A-Spec is the way to go. There are two trim levels between the two, but unlike many of its competitors, the base model is well enough equipped that it’s hardly a stripper.

For entry-level luxe, the ILX is hard to beat.