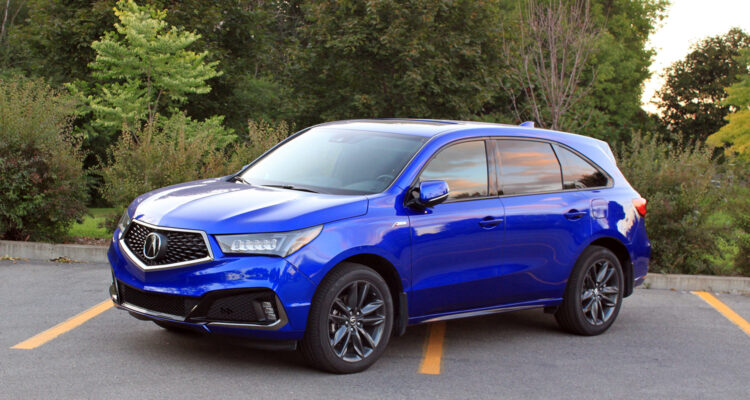 There’s something to be said about a vehicle that will allow you to pack in seven occupants and retain some fun while behind the wheel.

The 2019 Acura MDX is one such vehicle, even more so in the A-Spec trim I was in recently. The A-Spec doesn’t add any extra sportiness to the model – it doesn’t need it – but it does add some exterior enhancements that definitely make it stand out.

It faces some stiff competition in the luxury SUV segment, and despite some outdated tech inside, the MDX is a worthy competitor thanks to its SH-AWD system and a reasonable price.

Powering the MDX, equipped with SH-AWD, is a smooth 3.5-litre V6 with an output of 290 horsepower and 267 ft-lb of torque. Very good numbers for this SUV that give it some good acceleration, with power moving effortlessly through a 9-speed automatic.

The MDX does have an electronic shifter that uses a series of buttons in the centre stack, which are becoming more of a normal sight in cars these days. Despite their growing popularity, it does still take a little getting used to.

Where the MDX fell flat for me on the test was fuel economy.

According to Acura, the MDX’s combined fuel economy is estimated at 11.0 litres per 100 kilometres, but I was nearly three litres above that, coming in at 13.8 L/100 km. 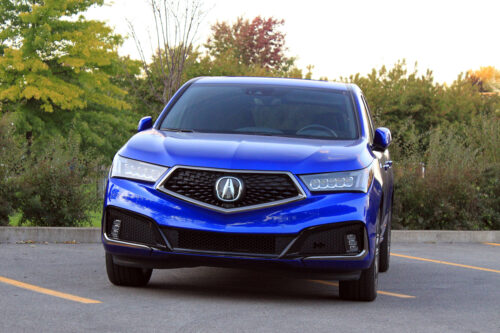 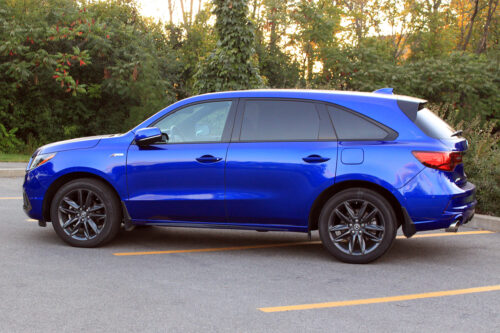 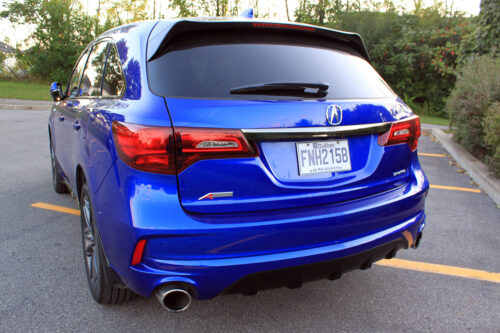 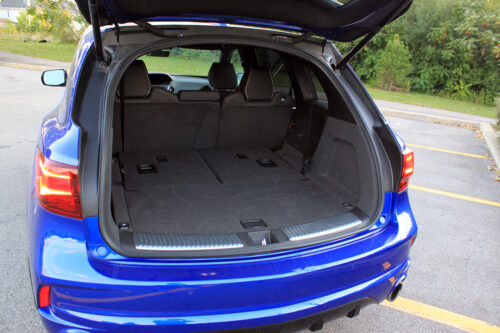 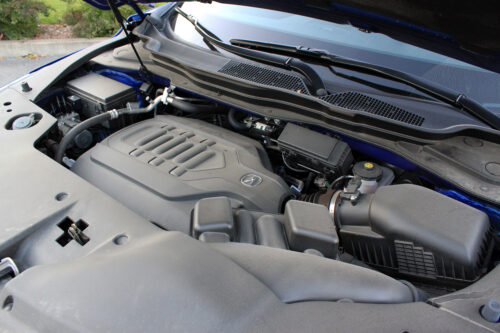 The MDX is quite striking in appearance, even more so with the Apex Blue Pearl (a $500 option) paint job, which is definitely on the bright side and allows key aspects of the A-Spec to stand out.

But even without that, the MDX has some attractive qualities, such as the large pentagon front grille and Jewel Eye LED headlights, with that design replicated in the fog lights in the lower fascia.

With nice gunmetal 20-inch wheels specific to the A-Spec and a dual exhaust out the rear, this trim also has a certain flair to it.

Inside, the first thing you notice on the 7-seater is the Alcantara and leather seats, which are some of the nicest I have planted myself on in some time. Up front, they are heated and cooled for extra comfort.

The second row bench can slide forward a bit to give the third row occupants a little more room, but it’s a tight squeeze regardless.

The cabin is roomy and, despite an abundance of black, does not feel closed in.

Up front, the layout of the controls and infotainment seem a little dated, but they are – for the most part – very functional.

The fact the MDX has two screens where information is split can be confusing at times, and in some cases the screens are duplicating information, making them redundant. And the graphics on the screens are also lacking a modern touch.

However, the quality of the ELS Studio Premium Audio System with 10 speakers makes up for a lot of the other shortcomings, and it is compatible with Apple CarPlay and Android Auto.

The MDX delivers a soft and supple ride with a hint of sportiness to it, which makes it quite enjoyable to drive. 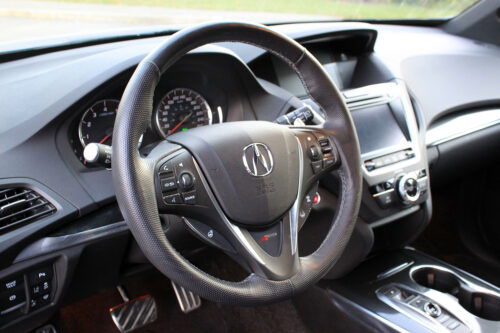 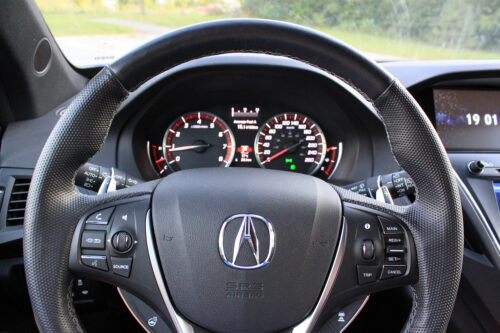 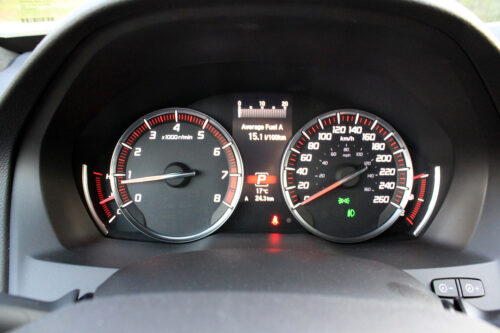 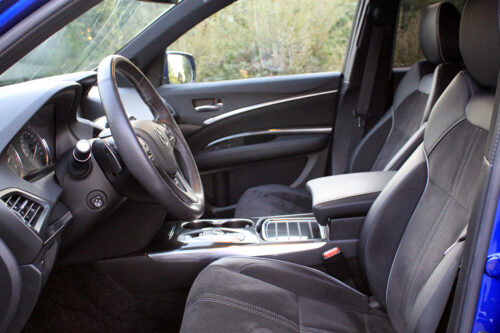 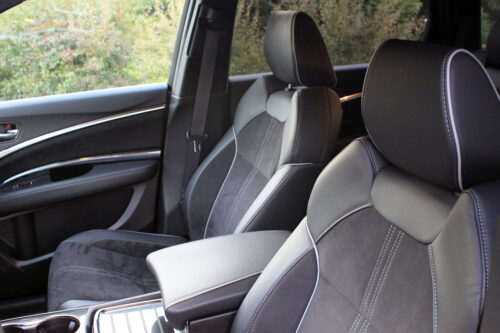 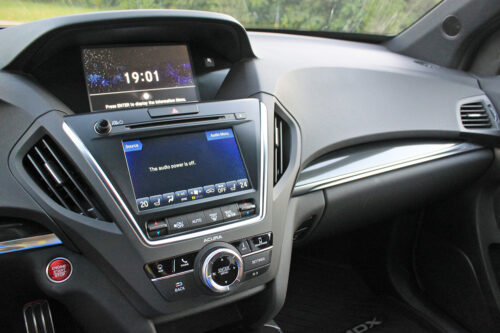 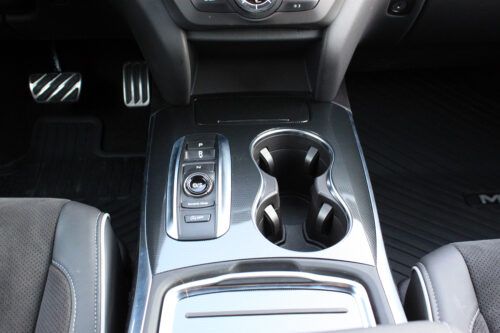 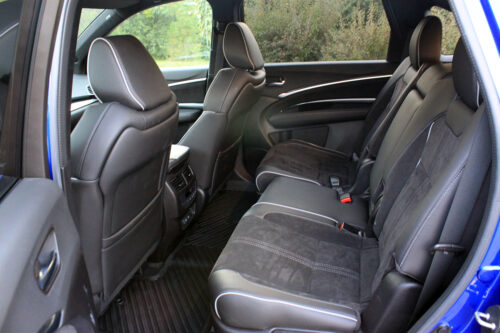 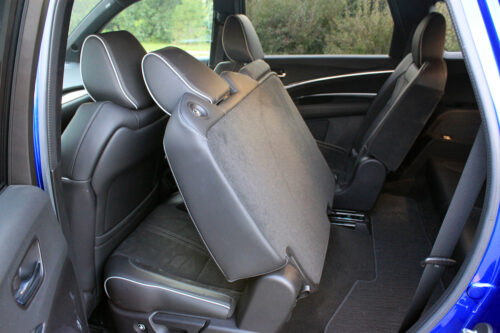 While not as sporty as its appearance might lead one to believe, the MDX can still handle being thrown into corners while still being very relaxing and quiet on the highway.

Whether in the city, traffic or out cruising, the MDX is a solid performer.