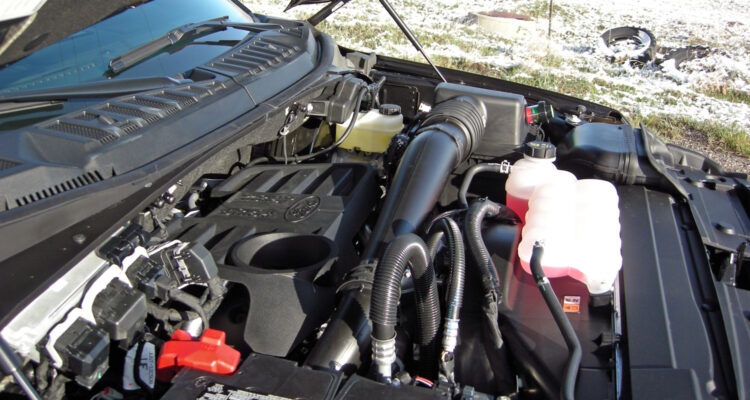 Ford’s new light truck diesel engine is a heavy-duty hitter. Available in the 2018 F-150 pickup, this 3.0 litre turbocharged V6 engine puts out 440 ft lbs of torque at only 1750 rpm, making it a great choice for anyone who tows a trailer with a F-150. It addition to the pulling power, it also gets amazing fuel economy even while towing. EPA estimated fuel economy ratings are 10.8 litres per 100 kilometres on the highway and with moderate driving style but keeping to the speed limit I was able to better that by 25%. Even when towing a 6,500 pound Tige Z1 ski boat and trailer on very hilly roads, the fuel economy was as good as the EPA estimates!

Originally designed by Ford for their then owned Land Rover division, this new 3.0 litre engine, internally named the Lion engine family, has undergone significant development and changes to make it work specifically for the North American truck market. Anita Bersie, Ford’s Engines System Supervisor for the 3.0 litre Lion engine explained some of those changes.

To fit it into the engine compartment, the turbocharger is placed outboard of the right cylinder head. The left side exhaust manifold directs the exhaust gases through a connecting pipe around the back of the engine to the right side turbo inlet. This design frees up space on the left side of the engine for items like the power brake booster and the electric power steering mechanism.

A Bosch design high pressure injection pump sits on the back of the engine behind the oil filter and between the cylinder heads where it can feed the computer-controlled direct injectors with high pressure fuel. The pump is driven by a toothed belt from the rear of the left side overhead camshaft.

The rear of the right camshaft turns a vacuum pump that supplies vacuum for the power brakes and the control system for the Exhaust Gas Recirculation (EGR) cooler. This cooler uses engine coolant to cool the exhaust gases before feeding them back into the intake manifold and the amount of cooling can be regulated by the control system. Warm EGR will warm the engine up quicker, while cooling the EGR reduces NOX emissions from the engine.

The oil pan is a two-part design, with a flat steel plate on the bottom and a structural aluminium upper section that mounts the heavy-duty starter, stiffens the lower engine block and supports the bellhousing for the 10-speed automatic transmission. This two-part design allows the internal moulds to be removed from both the top and bottom of the pan during manufacturing, which maximizes the internal capacity of the pan while minimizing outside dimensions.

At the front, the overhead camshafts are driven by a timed tooth belt, while the waterpump and mechanical fan idler pulley are driven by a second belt. The oil pump uses a two-stage output to improve fuel economy.

Both the engine bearings and the starter have been strengthened to accommodate the automatic engine stop feature, which improves fuel economy in stop and go driving. Come to a stop and the engine stops smoothly. Release the brake pedal and the engine starts with the slightest shudder almost instantly.

On the road, the engine is so quiet, most would never believe it is a diesel engine. Even standing beside a running truck, you may not think the engine is running! It is powerful, smooth and deceptively quick, mainly because the truck is so quiet inside. If you tow, or are simply looking for great fuel economy, this new 3.0 litre PowerStroke diesel engine is a great option in the F-150 pickup.